Shuichi Kagaya is a bit of a wimpy high school student with a secret – he’s a part time monster! His monster form is a giant cuddly toy ‘costume’ (complete with large zipper at the back). He also has a great sense of smell. One day, he rescues a damsel in distress, a half naked teen girl stranded in a burning warehouse. This sly and sexy Kurea “Claire” Aoki is also not who she seems. They soon form an unlikely alliance to kill monsters and help Claire find her sister. (Gleipnir Episode Review) 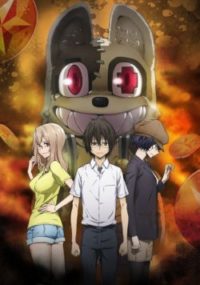 This is a review of episode one of the Gleipnir anime show.  It is based on the manga series by Sun Takeda which appeared in Kodansha’s seinen manga magazine. ‘Young Magazine the 3rd’ from October 2015 and has been collected in seven tankōbon volumes. It is published in North America by Kodansha Comics.

The Anime series aired in Japan on the 5th April as part of the Japanese Spring 2020 anime season.

Incidentally, the name ‘Gleipnir’ is from Norse Mythology – not that the show has anything to do with old Scandinavian legends or anything (yet anyway), and it was a very strong (but thin as spider silk) chain that was used to tie up Fenrir, the wolf. Fenrir was (of course 🙂 ), the son of Loki and the giantess, Angrboða.

Ok, lets get a few things out of the way as some of the other reviewers have made some peculiar comments about the shows so far. The ‘fanservice’ isn’t really fanservice. There is a reason for the semi nudity which will become more apparent on the second episode – there are a few gratuitous panty shots though which are a little strage and confusing if you are trying to work out the plot – that will definately wind up those of us that are looking to take this anime a bit more seriously. Also, this is not a death game anime. No really, it definitely isn’t!! It’s more about finding stuff out and locating people rather than killing players in a game.

The episode opens with a mysterious shaded figure in distress. She/he/it finds a coin by a river and heads over to a place called Hotel Mythos. Outside is a vending machine. The ‘entity’ struggles to put the coin in the vending machine but eventually manages. Then a seemingly friendly (but dopey looking) character appears and thanks the entity for finding the coin. 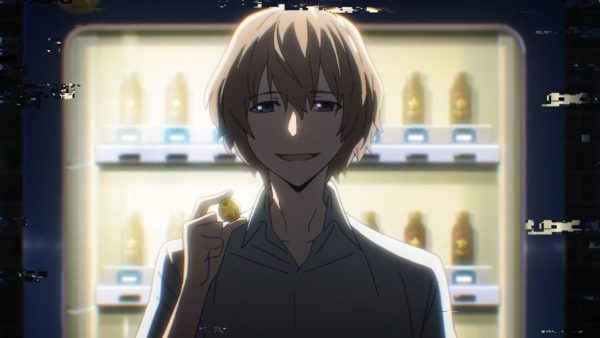 Then we see the Opening credits – a pretty good opening to help get our attention.

Popular, for a Monster

At a school, Shuichi Kagaya is a popular student with friends and the respect of his fellow pupils. He has a recommendation for university and seems to be doing ok.

While he is at school, one of the pupils heads out to what seems like an old abandoned warehouse where she tri, in vain, to make a phone call. You notice a large can of what could be petroleum next to her. 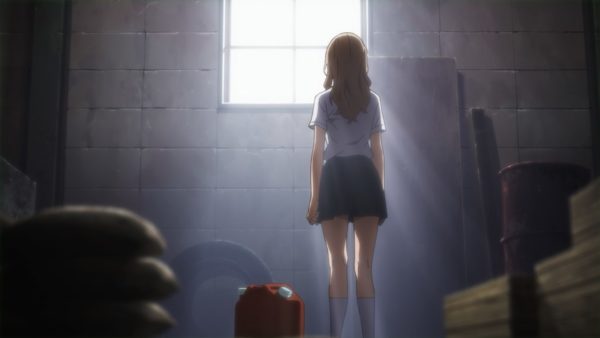 Later that night, Shuichi is trying to sleep. He gives up and goes outside to get a can from the vending machine. In the distance he notices a fire. He heads over there. As we walks over, he mutters that he should not show the beast inside him (?!) but notices (in fact he smells) that one of his school colleagues is inside the burning building.

The attractive girl seems has her blouse unbuttoned is unconscious and sat by a pile of wood. It isn’t clear why her blouse is undone.

It’s possible that she is attempting suicide by setting the place on fire herself. (i.e. she used the petrol in the petrol can (see above) to start the blaze).

Shuichi reluctantly transforms into a very large cuddly toy costume (he isn’t actually a cuddly toy, it’s just an outfit – he even has a big zipper in his back). 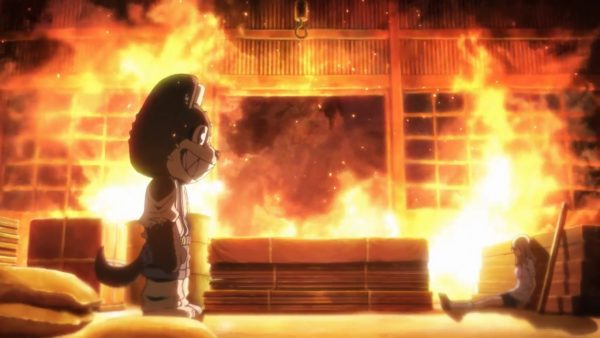 He charges at the brick wall and smashes it. Then he takes Clair through the hole and lays he on the ground away from the fire. 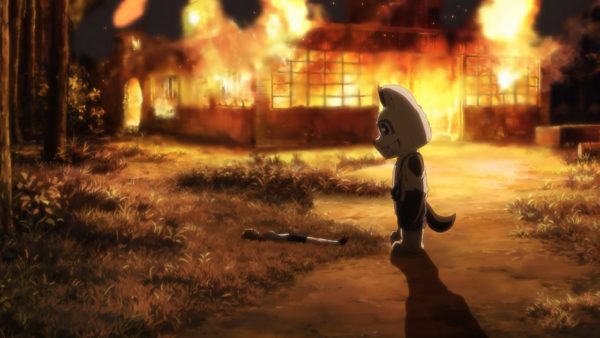 While Clair is lying unconscious, Shuichi sniffs the air. Then he begins to take Clair’s panties down (wait, what!) and, at the same time transform back into a normal person. He is appalled that he almost succeeded (hey dude, we’re also appalled!) but he doesn’t try to put the panties back on properly. 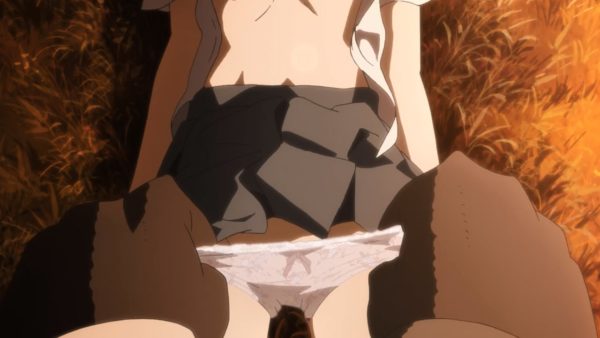 Where is my Phone

Next day, Shuichi awakes to notice that he has lost his phone. He’s concerned that he may have left it at the warehouse.
Sure enough, Clair picked up his phone and confronts him about his activities last night. She is excitable and manipulative. Shuichi is terrified. 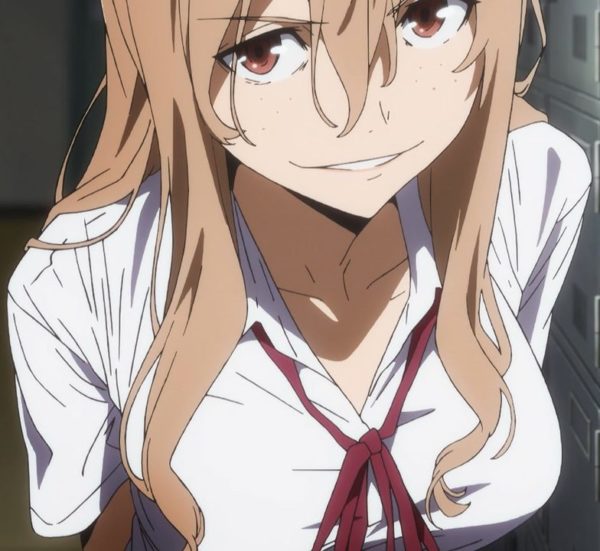 She asks him what it like to be a monster. He tries to avoid her although it is difficult since she still has his phone.

Later, while Clair is in the school swimming pool, Shuichi attempts to break into her locker and retrieve his phone. He notices her smell again and it gets him …. excited.. I don’t think it’s anything to do with sex, but it’s definitely distracting for him. Claire had taken the phone with her.

He eventually meets up with her on the school roof. She keeps referring to him as a monster and Shuichi ignores her and pretends that he doesn’t understand what she means. The discussion comes to a head when she pushes him off the roof. 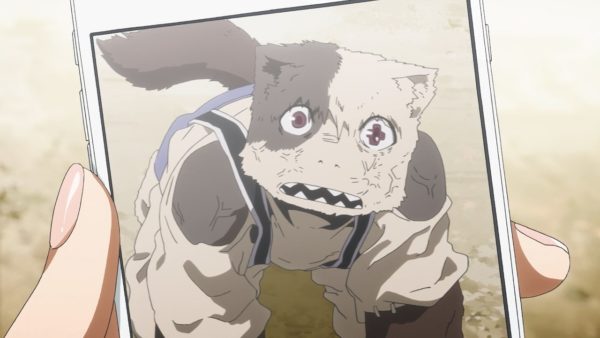 Shuichi of course, instinctively transforms to protect himself and Clair takes a picture with her phone. He immediately jumps back up to the rooftop and hides at the top of the stairwell while talking to Clair.

She is determined to get some answers from him and is seemingly unimpressed that he saved her life the previous night. In fact, she does remember that he began to take down her underwear and uses this to intimidate him. He tries to explain that his powers mysteriously appeared and that he doesn’t know anything about them.

Their conversation continues on the way home from school. Clair introduced herself as Clair Aoki (which Shuichi thinks sounds a little trashy). She takes out a coin and asks him if he has seen one like it before. 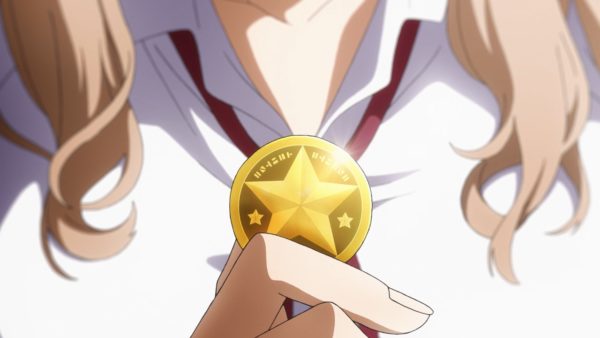 He tells her truthfully, that he hadn’t. She accepts his answer but won’t explain any further than coins like those seem to be connected to monsters.

She takes him to her apartment. Apparently, she lives alone. Clair changes her clothes in front of Shuichi. She isn’t bothered that he can see her naked but warns him on coming any closer. She tells him that he has to do what she wants now and when Shuichi counters with the fact that he saved her life, she admits that he completely ruined her suicide attempt. 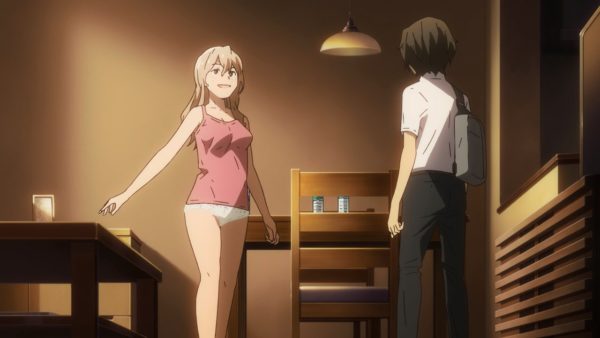 Then a masked intruder appears on Clair’s balcony and enters her apartment. She beats up Shuichi and asks for her coin. 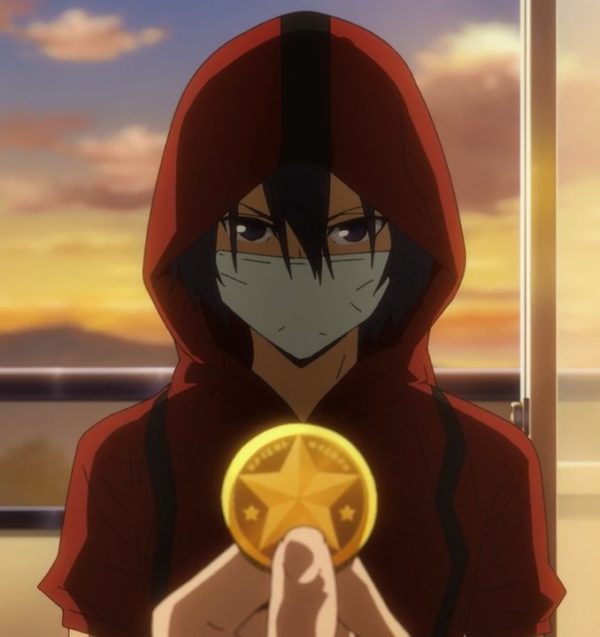 Clair tries to get information from the girl but the girl is only interested in obtaining the coin. She does however indicate that if you use one of the coins, you will get power but lose everything else. 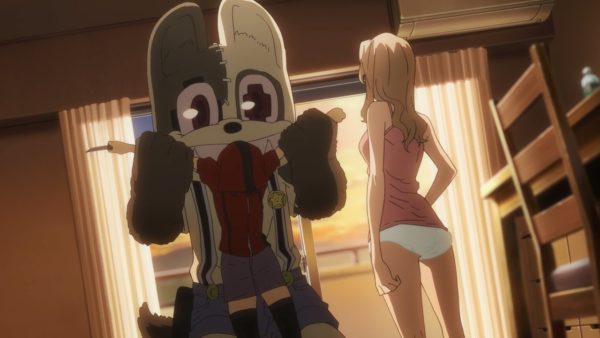 The intruder supposes that Clair and Shuichi are ‘gatherers’ too and with that she changes and turns into a monster. Her monster doesn’t seem quite as drastic (or cuddly) in appearance as Shuichi. She grows clawed feet and hands and she becomes more powerful. She knocks Shuichi to the wall and tells him that he is pathetic.

And there Episode One show ended.

I godda say I was quite impressed. There was some great graphics and the story kept us going throughout. The only downsides for me were the pretty-much ‘done to death’ op (overpowered) wimpy hero as the main character and the knicker shots – I quite like fanservice as long as it doesn’t distract from the story – this did. How could I say such a thing, but it was confusing – or maybe that’s the point.

It seems definitely violent and more than a little perverse. I’ve seen the next episode and although there is a little bit of an explanation for the perverse nature of the show (i.e. it’s not all about fanservice), it still seems bizarre and definitely grim.

I’ll certainly be watching more shows and possibly even reviewing a couple.

Recommended – worth the watch!

I’d rate this a pretty good 8.7 out of 10.  The production was great, very tight direction and an unusual story.

The Gleipnir Anime pictures and everything else associated with the TV show are the property of Jet Production and Tokyo MX – all rights reserved.

Discuss this in the Anime Forum

This Episode Review is copyright Tony Fawl and not for reproduction without permission.