The Lower Decks is the fun story of the support crew serving on one of Starfleet’s least important starships, the U.S.S. Cerritos. Four Ensigns battle aliens, scary tech, senior officers and their somewhat mundane duties to cool, unusual, disturbing yet hilarious adventures – all in the name of Starfleet.
Short Summary 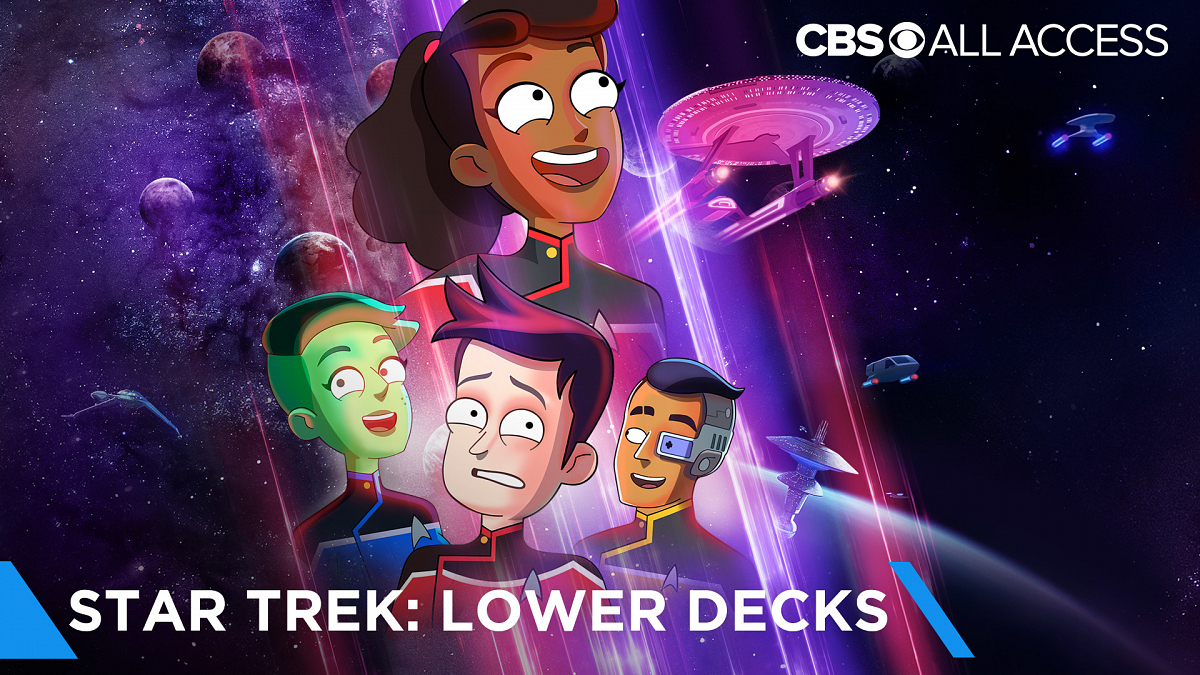 This is a review of the CBS All Access released Star Trek saga, Lower Decks. It was developed by the lead writer Mike McMahan (show runner for the series) who was also involved shows such as “Drawn Together” and “Rick and Morty”. Lower Decks was shown on the CSB streaming service on Aug. 6 2020. Alas, the first season is only 10 weekly screened episodes.

It tells the story of the USS Cerritos, a ‘second contact’ starship, and its support crew based on the lower decks where they normally undertake maintenance and operational duties away from command decisions and action on the bridge. The first episode opened to fairly mediocre reviews which is a shame because it’s marvelous!

It is an American animated web television comedy series for the more mature kids and adults. This show is also part of an expansion of the Star Trek franchise by CBS executive producer Alex Kurtzman. It’s the first animated series produced for CBS All Access, and the first animated Star Trek series since the unimpressive 1973–74 Star Trek: The Animated Series. Star Trek: Lower Decks is set in the year 2380 (just after the events in the timeline of the film Nemesis).

Star Trek: Lower Decks – So What’s it About?

We are led to believe that the premise for the saga is based on an episode from Star Trek the Next Generation. Specifically the STNG episode called “Lower Decks,” which told the story from the point of view of a group of junior officers on the Enterprise. Personally I thought it was a bit mediocre. It was ok but certainly not brilliant – though certainly better than the earlier Babylon 5 episode, the truly awful and stupid, “A View from the Gallery”. Amazingly, this terrible episode was written by one of the great sci fi writers of the time (Harlan Ellison). It also received one of the two worst reviews – out of over a thousand – on Sci Fi SadGeezers when it was first aired. The point I’m making (badly) is that the idea isn’t new, lots of shows have tried the same thing and I honestly don’t dink any did a good job. Now we have a series based on the same premise and it is terrific! Who’d o’thought!

This animated Star Trek saga the challenges the venerable STNG, Voyager and dare I say it, DS9!? The idea is a little more irreverent than the previous attempt in that it argues, ‘why does all the fun centre happen on the bridge!’ If you think about it, although command decisions are all made there, most of the actual action takes place elsewhere. 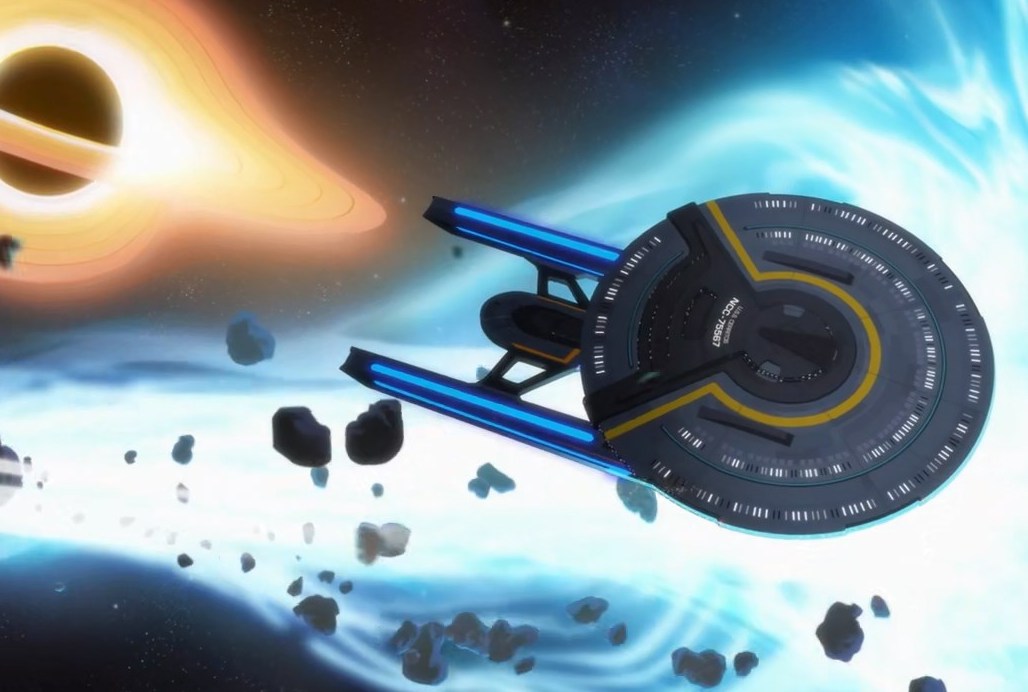 This fits in terrifically with the writing skills of Mike Mahan who is great and getting down and dirty with the humour. Extreme, bloody, violence, zombies and a myriad of other disgusting scenes are pretty much the norm for him. It is refreshing in that the show doesn’t fall back (too heavily at least) to the slightly predictable and somewhat patronizing antics of the bridge crew on the series’ from the 90’s. There is definitely some of that here but the concept that the main cast member is a ‘disrespectful genius’ is certainly quite different.

The show is a little too adult for kids and a little too childish for hard-core sci fi fans. Which means it’s great for us!  The writing was great fun! 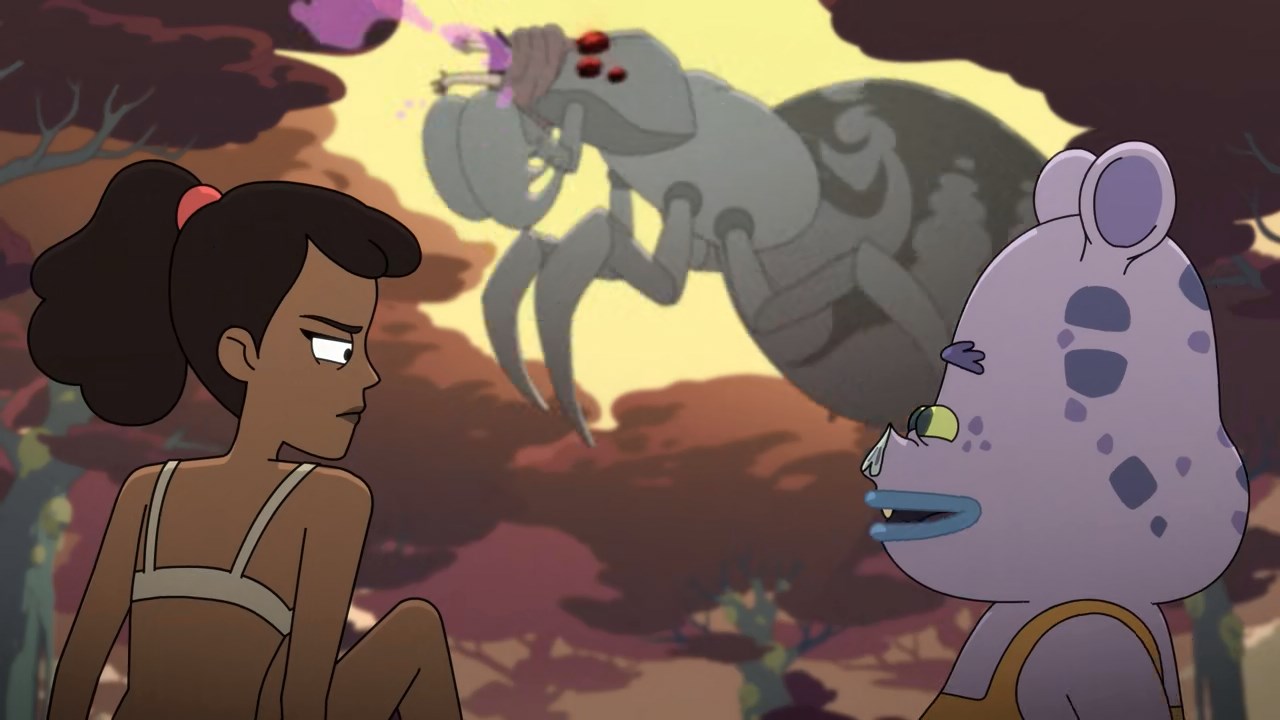 A stroke of genius was the premise that the USS Cerritos was tasked with undertaking ‘Second Contact’ missions. These are clearly not as high profile as the ‘first contact’ missions but would certainly involve a lot more hard work (contract negotiations, ironing out cultural differences etc.) A Boimler says, “It’s still pretty important — we get the paperwork signed, make sure we spell the name of the planet right and get to know all the good places to eat.”

Creator/showrunner Mike McMahan made his name with the terrific animated series’ Drawn Together and Rick and Morty.  These shows of course, are a little darker than the quip-filled grown-up childish humour of Lower Decks. It’s not just the dialogue but the animated situations and the scenery.  The show really benefits from writers who know how to use an animation budget! As a result, the comedy aspect of the show is able to shine not only because of the whacky situations, but also the play on words, Star Trek satire, mild but respectful piss-takes out of TNG, Voyager and DS9. For instance, we all enjoyed the reference to a stalwart of 90’s Star Trek: When Beckett Mariner complained when she is punished by having to clean one of the holo- decks, a chore which implied having to clean semen off the floor. Haha, yeah I know, we all suspected what it was really used for! Wtf would you be doing booking the holo-deck to go fishing when you could be in the midst of an orgy of whatever perverted antics your dirty little minds can imagine….. and then go fishing!  At least DS9 had the balls to tentatively admit it. 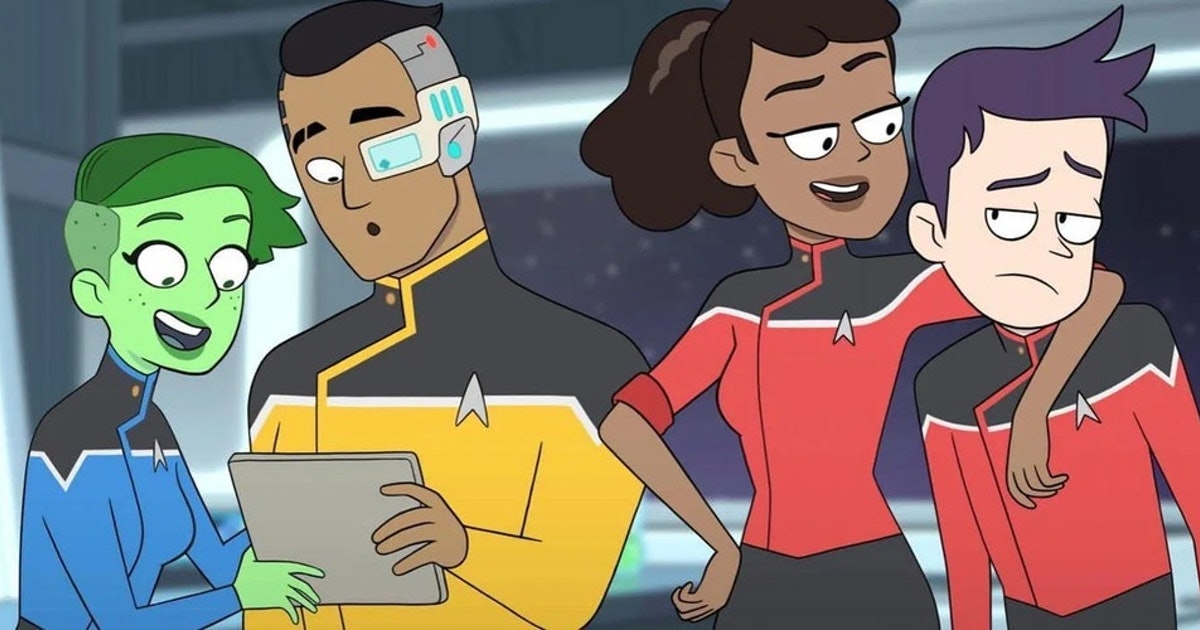 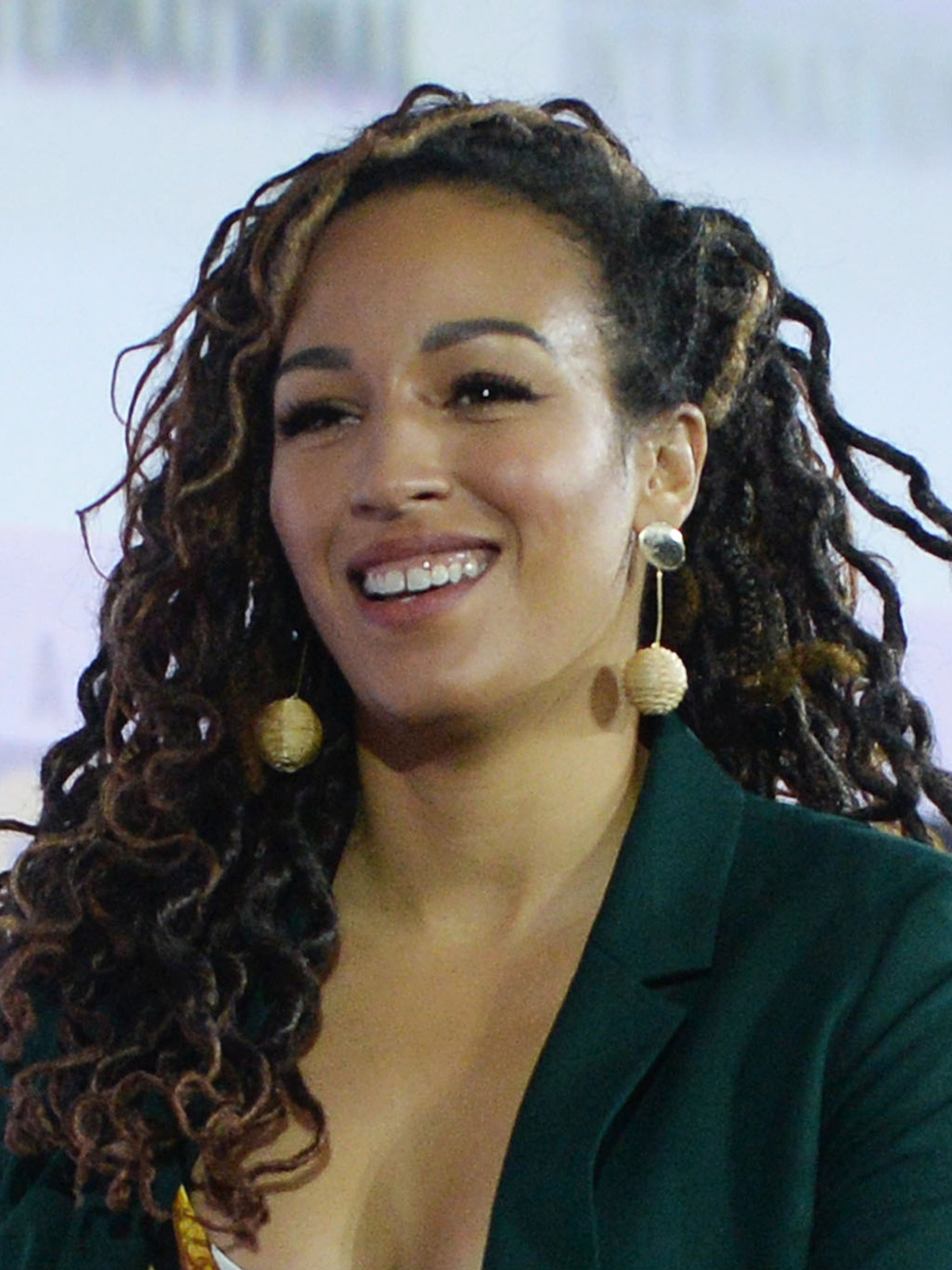 Tawny Newsome voices Ensign Beckett Mariner, whose reflexively rebellious, obnoxious demeanour belies her considerable competence in diplomatic skills. She is terrific in the part and absolutely believable and dare I say, cute.  Her only black mark is a mother who really, really liked Star Trek Enterprise  🙂

Jack Quaid’s mild mannered interpretation of Ensign Boimler is meek and mild mannered.  He is obsessed by rank but not particularly adept at achieving his goals. It isn’t that he is particularly sub-standard, he just isn’t as cool or capable as his genius doting friend, Beckett Mariner who is trying to get him to shed his considerable inhibitions and prejudice. Quaid’s role is quite a contrast (but not shockingly so) of his excellent role as Hughie in the hit Amazon series The Boys.

Ensign Tendi, played… erm voiced by Noel Wells, is a newly assigned junior science officer who’s eagerness to do anything is almost unbelievable.

Eugene Cordero plays the engineer Ensign Rutherford a junior officer with Vulcan-designed cybernetic enhancements to help tone down any unwanted emotional responses. Alas, it doesn’t work particularly well and he keeps having to ‘tweak’ it.

Star Trek: Picard was pretty good and Star Trek: Discovery is, of course amazing. This latest story in the saga, Lower Deck may seem a lower budget side project, but it’s giving the other shows a run for their money. 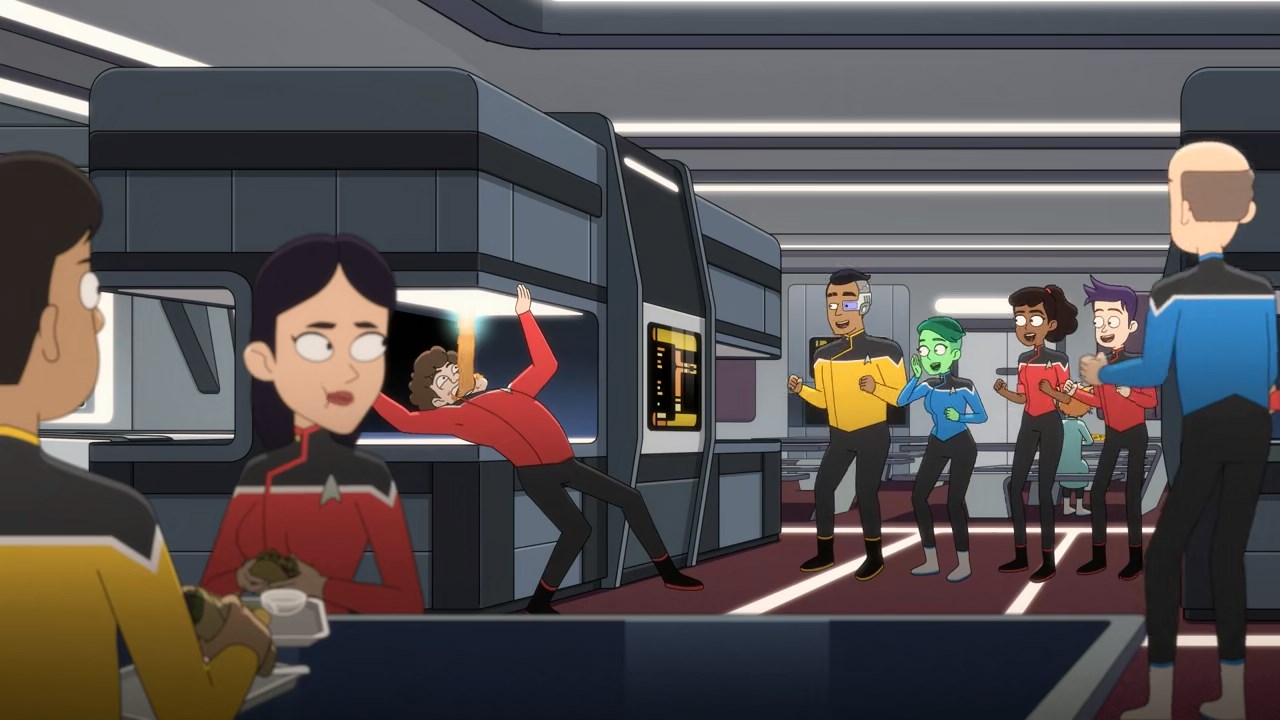 This is much lighter and a lot more fun and memorable to watch. Star Trek humour has never been done well before and this show finally seems to have pulled it off! It is certainly able to take on The Orville and many many of us are looking forward to the next season with open arms.

All we need now is a Start Trek Reality Show – Star Trek: Keeping Up With The Cardassians (I know, I know it’s an old one, but I couldn’t resist).

The pictures, story and everything else associated with the show are the property of CBS Television, All rights reserved.

This Review is copyright Tony Fawl and not for reproduction without permission.