In this episode (called The Heart of a Fire Soldier) we are introduced to a new character Arthur Boyle. Shinra and Arthur grew up in the same academy and Shinra, who always had trouble with communicating effectively, suffered a little jealousy because of the seamlessly easy manner that Arthur managed relationships with people

This is the second review of Enen no Shouboutai (Fire Force) and follows on from last weeks post. In this episode (called The Heart of a Fire Soldier) we are introduced to a new character Arthur Boyle.

Shinra and Arthur grew up in the same academy and Shinra, who always had trouble with communicating effectively, suffered a little jealousy because of the seamlessly easy manner that Arthur managed relationships with people. Even though Arthur is not very smart, he still does well for himself – it seems he is the opposite (and a rival) of Shinra.

When Arthur arrives at the Fire Station, he is confronted by Shinra and they set about fighting on the roof in front of the girls (Miko and Sister Iris).

When Lieutenant Takehisa arrives and asks what is happening. Arthur does not handle respect for senior officers very well and fails to properly salute and acknowledge the rank. The Lieutenant seems quite relaxed. Arthur’s cheeky attitude is not intentional, he just feels that everyone is equal at the ’round table’ (he is a bit of a King Arthur and the Knights of the Round Table fan and seems to want to live by a code of chivalry rather than rules of authority).

Arthur believes himself to be a knight similar, in conduct, to the knights of the Round Table. 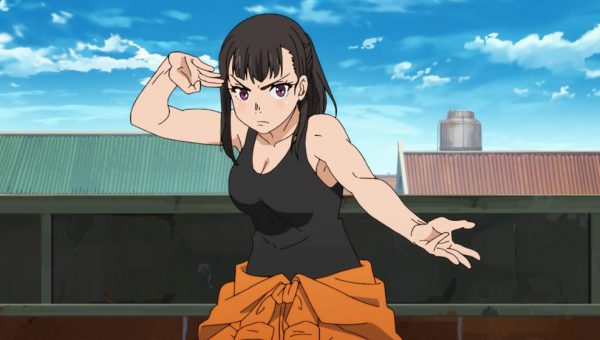 Maki Shows off Her Charms

Instead of chastising Arthur Lieutenant sets Miko onto him and Shinra. This might seem a little intimidating for Maki, but she is an ex-soldier and despite the boys being third generation, her military training helps her handle herself. She dispatches Shinra (who I doesn’t like the idea of fighting with the girls in his team) and then she faces up to the new boy, Arthur. 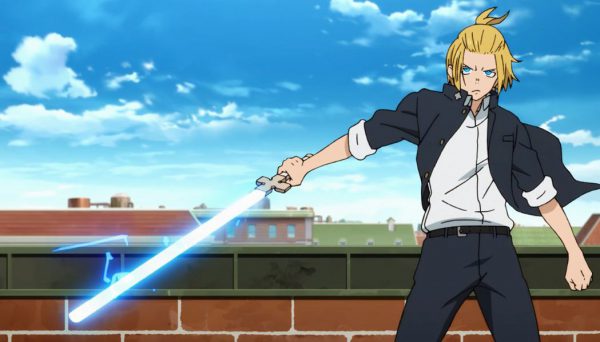 Arthur Gets Out His Excalibur

The blonde knight certainly notices the serious looking large breasted and very attractive poser, Maki and gets out his Excalibur (wouldn’t we all!). Excalibur is Arthur’s special weapon (yeah we all got one dude!) that is a super hot stream of plasma that can cut through metal (erm.. and eeeww!) Alas, he is stoopid enough to underestimate Maki too, he turns off the plasma, makes some misogynistic, flirtatious comment and is quickly punched and subdued by the serious lady firefighter.

Maki rubs it in a little and shows off her eagerness to teach the boys a lesson. They retaliate with a little harmless and bitchy (for them) name calling. For some reason they call her an ogre which gets Maki quite upset. I think she considers herself quite feminine and her aggression is something that she maybe a little sensitive about. In the end, she gets angry and retaliates to the boys name-calling by getting out her Bobobo. 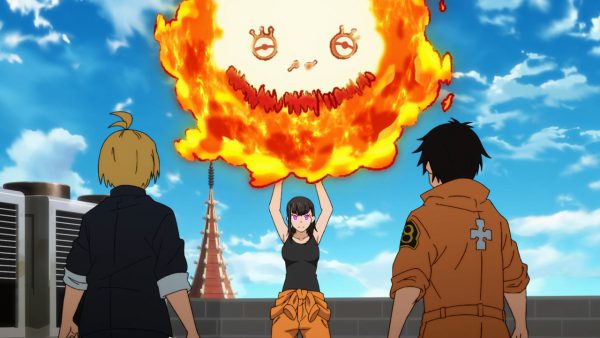 Maki brings out her Boo….. Bobobo

This giant fireball is put out by the Lieutenant who douses it with water. I guess he felt that things were getting out of hand.

Later, Captain Akiharu Obi takes the two newest recruits to the get some ramen and when they return, Maki shouts that there is an Infernal incident. They head out to the suburbs where they learn the unfortunate story of a schoolgirl who lost her mother as an infernal last year and now her father has just become one. The team agree to put this one to rest as quickly, painlessly and quietly as possible. 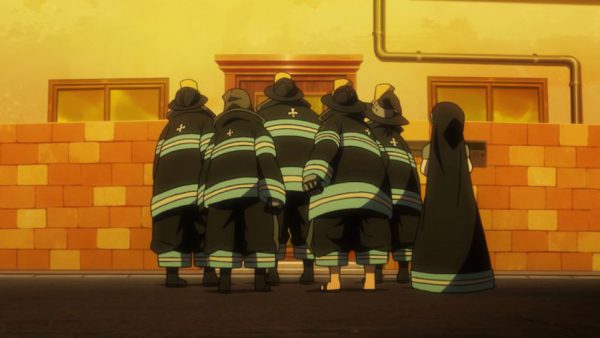 The Team head into the House

Meanwhile, outside, a long haired dude secretly sprinkles what looks like gunpowder and there appears a grimacing, menacing flame above the house. It dissipates after a few seconds, but the team note the peculiar occurrence as they enter. 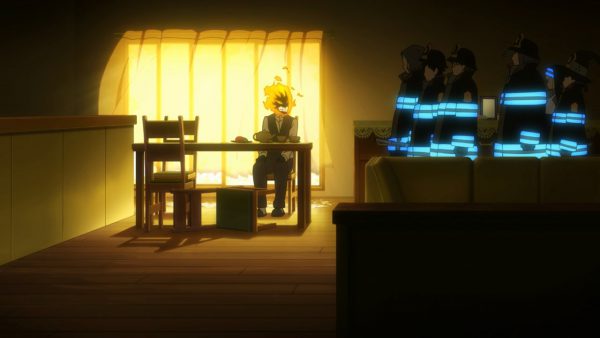 Papa infernal is just having a cup of tea

Dad is holding it together

Inside, the father of the schoolgirl girl is sitting quietly at the table, He makes no attempt to fight and looks at the fire fighters. Arthur, eloquently asks to put this Infernal to rest and does so efficiently and with as little pain and bravado as possible – he goes behind the infernal and uses Excalibur with a surgical precision to destroy the Infernal’s chest ‘core’. For a supposedly foolish rookie, that was quite sensitively done.

Outside the house, the Gunpowder Sprinkles dude seems unhappy at the outcome. I suspect he thought that the Fire Team should have had more of a tough time. He comments that something funny is happening in this Fire Fighter team.

The firefighters have moved on though. The Captain tries to comfort the schoolgirl (who has just lost her father) with a picture that he recovered from the house before it collapsed.  It’ shows her, and her parents in a normal happy family photo. It’s quite moving but thankfully not as over-the-top the disgraceful dreary dialogue at the end of of last weeks show. 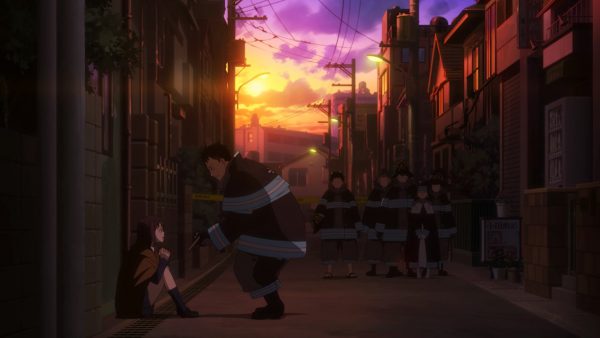 As they head back home, the Captain tries to comfort the daughter of the Infernal

Later, back at the fire station, there is a scene of the boys trying to get to sleep in their bunk bed. Some pointless and semi comedic banter closes the show.

Actually, that was a lot better than last week – I guess last week they tried too hard to be sympathetic and just came across as pathetic. This had a much tighter story and the writers didn’t try to pander to our sensibilities too aggressively. I rate this episode high because of the awesome graphics (artwork), the scenes are meticulously drawn with an excellent use of the colour palate. Voice acting was great. The story was pretty good and characterisation was almost faultless. There is no clear story arc yet (except for the gunpowder-plotting-sprinkle-dude) and I still feel that the show is missing a little something.  Hopefully it’ll be even better next week – cant wait!

I’ll totally be watching next weeks show though and I’d rate this a better 9.5. What did you think?

Discuss this in the Fire Force thread in the Anime Forum.

The characters, pictures, story and everything else associated with the show is copyright   David Production and Crunchyroll.  All rights reserved.