After two years in early access Oxygen Not Included has now been officially launched, and we should all play it. It’s a gorgeous hand-drawn colony builder that makes you balance an absolutely insane amount of variables and never stops throwing increasingly complex problems at you, and it’s so blissfully addictive 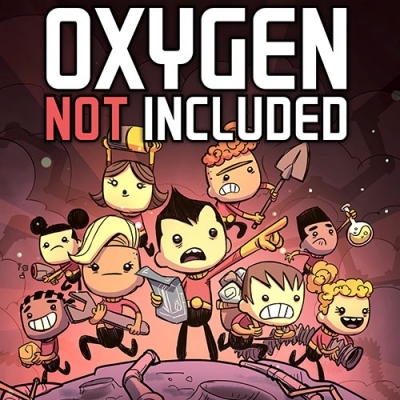 After two years in early access Oxygen Not Included has now been officially launched, and we should all play it. It’s a gorgeous hand-drawn colony builder that makes you balance an absolutely insane amount of variables and never stops throwing increasingly complex problems at you, and it’s so blissfully addictive.

Made by Klei Entertainment of the Don’t Starve fame, this game graphic style looks familiar, but richer and more detailed. And it doesn’t have the manic, desperate feel of Don’t Starve… at least to begin with.

Instead of a single survivor we get to control multiple characters, each with their own combination of traits, strengths and flaws. They’re called duplicants, or dupes, and the story behind that can be discovered as we explore the world and piece together bits of lore hidden away in abandoned ruins.

We start marooned inside an asteroid, with only a half-empty ration box, tree slightly confused dupes and a high-tech bioprinter that will occasionally throw us care packages and reinforcements. Contrary to the very name of the game, there’s some oxygen definitely included! It’ll probably be enough for six game days before the adorable little dupes will start dying horribly, so we need to get to work. 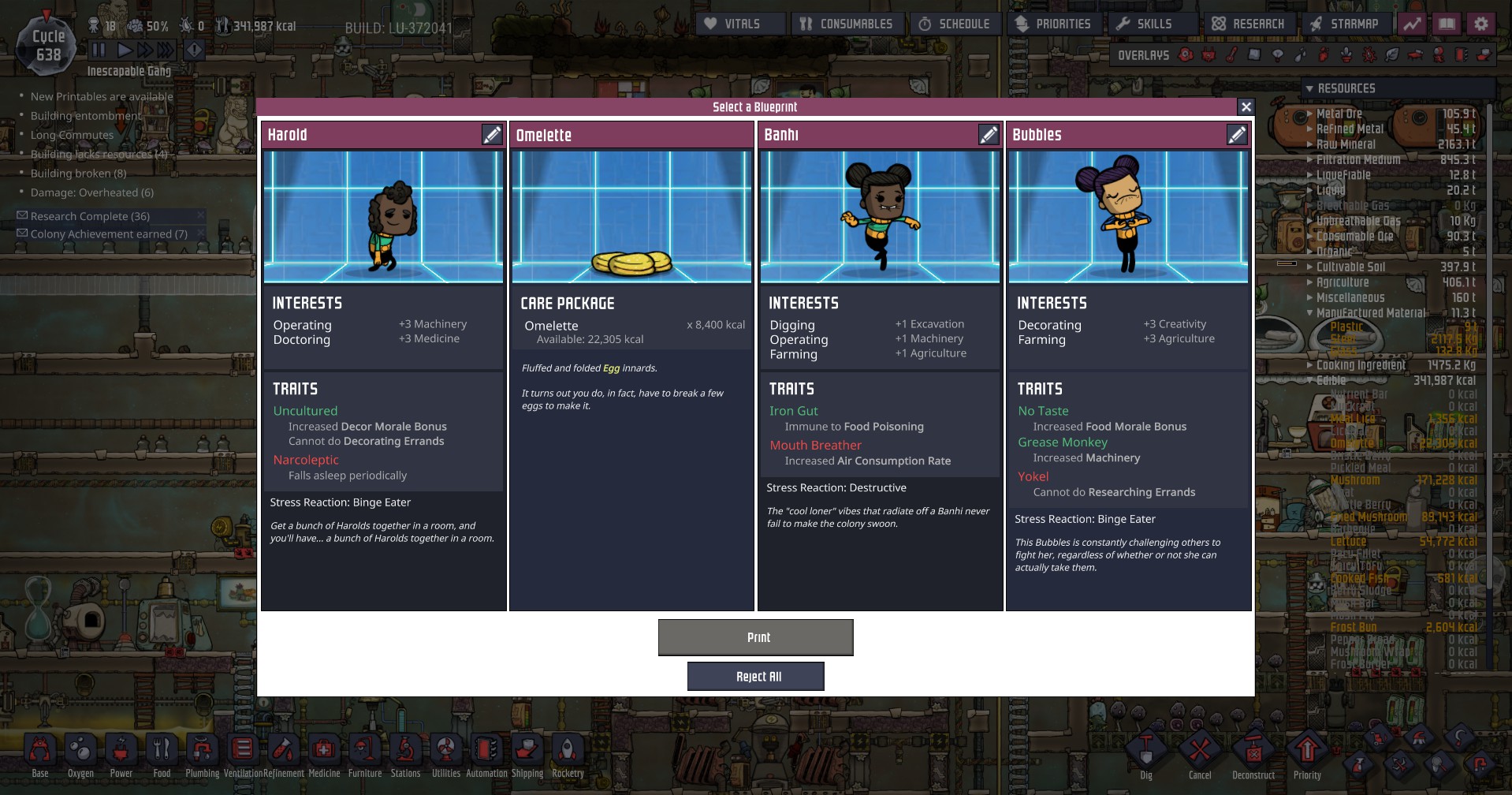 Oxygen Not Included: friend or omelet?

It’s quite relaxing at first. The soundtrack is lovely, the animations of dupes digging, jumping and lugging stuff are delightful. There are strange and gorgeous alien plants and animals all around, but wildlife isn’t dangerous unless attacked. Dupes mine out tunnels and rooms inside the asteroid, build themselves beds, research station, hamster wheel power generator, and, finally, an oxygen diffuser that works on algae.

So far so good. Now we need a latrine, a food source, a way to prevent germs from spreading from former to latter, and a way to keep morale from plummeting. There are pockets of unbreathable gases blocking the way to plants and fuel and deadly bacteria swarming in the walls. There are surprise geysers and volcanoes just where you planned to build a farm and, of course, there’s the most deadly of enemies: carbon dioxide buildup and rising temperatures, both the inevitable consequences of early industrial development.

The ultimate goal, apart from keeping your dupes alive, is to reach the surface of the asteroid, build a spacecraft and fly to the edge of the observable space. And that’s a long way to go from our ration box and hamster wheel. 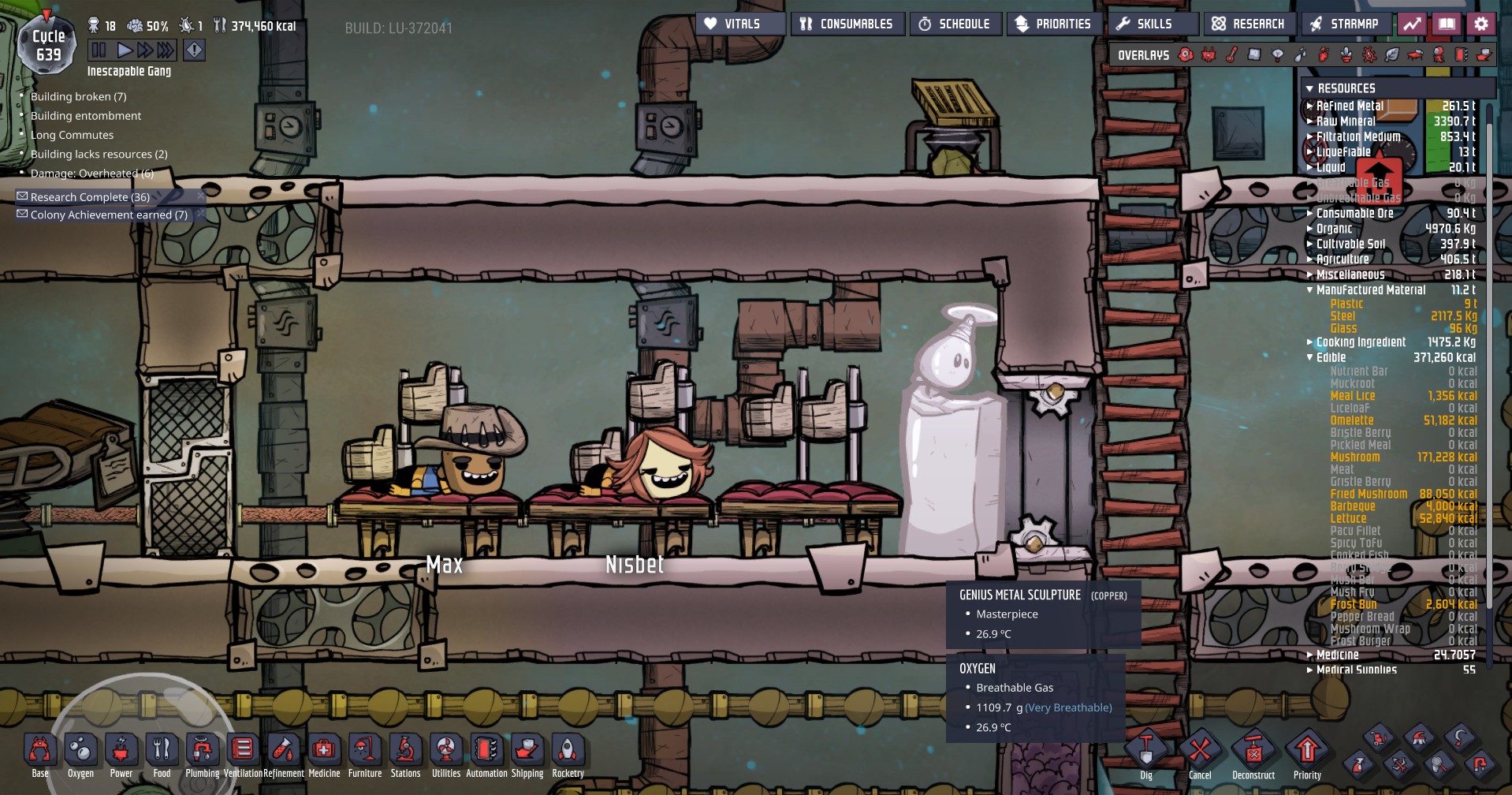 Before we can produce space-worthy materials we have to dig down, toward the asteroid’s molten core, to harvest oil, ore and diamonds there. The game offers very little handholding, expecting you to just dive in and try things out. The tech tree in strategy games often feels like just another resource to manage: how much of our colony’s output do we need to dedicate to research to outpace the competition or the incoming catastrophe? In Oxygen Not Included, though, it’s almost a mercy not to have all the technology at once: it’s honestly too much for the novice to figure out unless we take it step by step. By the time you’ve successfully installed a plumbing solution you feel like some kind of wizard. Soon after your ill-conceived water hydrolysis plant might flood the whole place with superheated steam because you’ve not taken into account thermal conductivity and heat capacity of the materials. It’s all part of the fun.

The tools game offers are deceptively simple and powerful. You can build intricate water reclamation loops, air cooling systems, chain automation logic with AND, NOT and XOR gates to solve multiple crises at once. Or, if you’re like me, you can pour water on a volcano and see what happens. 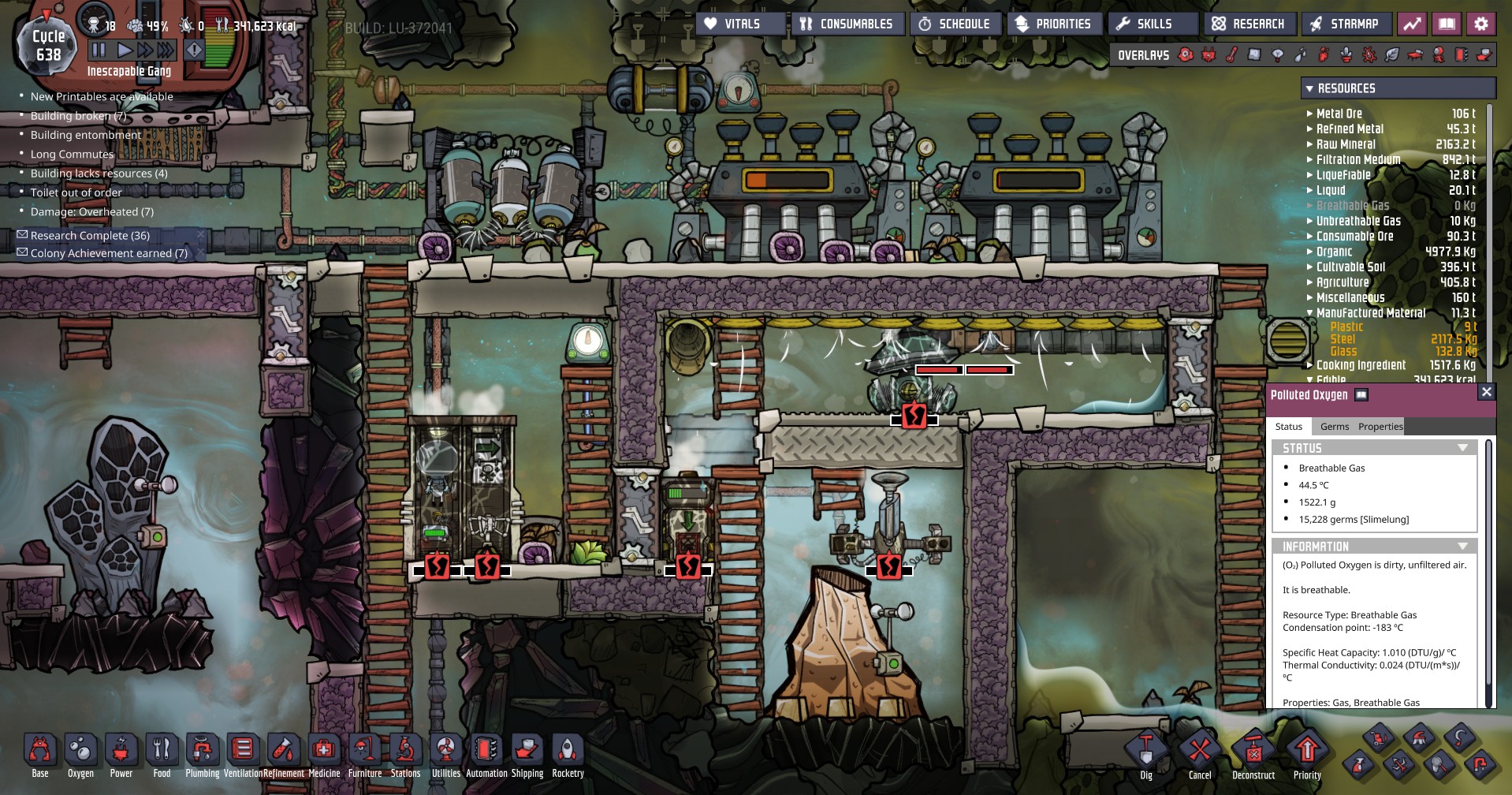 Thanks to the years of early access, there is already a thriving online community of the game veterans there to help. There are detailed, continuously updated guides for every aspect of the game, and standalone solutions you can adapt for your colony. There’s the legendary Self-Powered Oxygen Module, numerous ideas for automated ranches and volcano taming, power grid plans and much more. There’s never one solution that always fits, of course: the game tracks all the physical properties of your colony, including the amount of heat every single engine and transformer put out, and you always have to account for that.

And on top of that all, I personally am constantly distracted by the animals. There are so many species wandering the game world! The hatches, dog-like, mostly mouths on legs, come in four different breeds. They also excrete coal, so breeding them in ranches is one way to supplement the fuel requirements of the colony. Ranching mostly involves petting and brushing them at the grooming station, so it’s obviously a high priority activity. 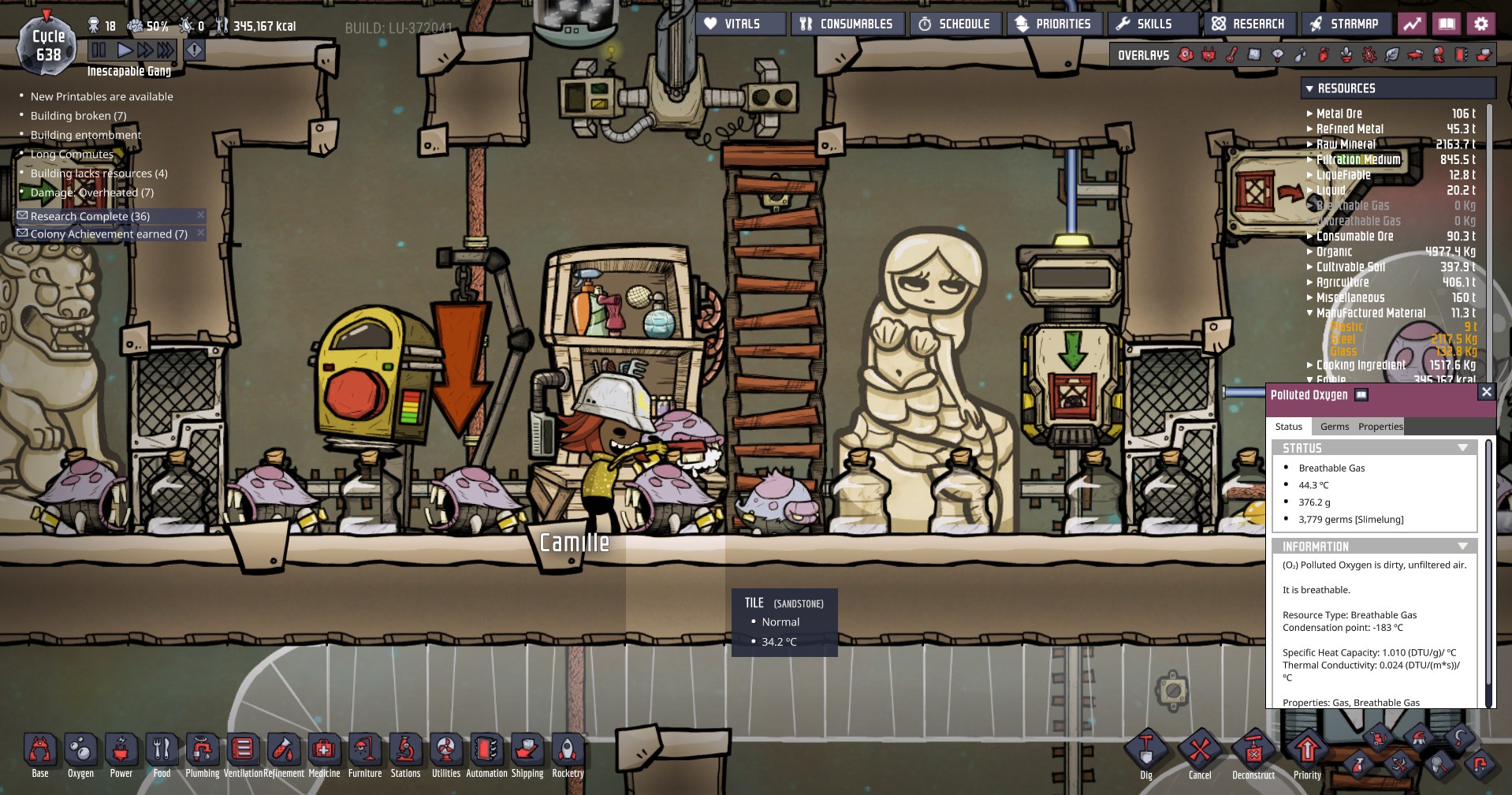 Daily life of a rancher

There are also dreckos, slow and stompy and with the penchant for climbing on ceilings. They can be sheared for textile and plastic. There are crab-like pokeshells, one-eyed morbs and flying pufts, and pips who are basically kittens and will steal all your stuff. There are slicksters, little black and red ghosts chilling near the magma layer, and space voles that frolic in the vacuum. I’m still building my first rocket so I’m not yet sure if they’re not going to chew a hole in the hull, but I’m keeping an eye on them.

There are numerous plants to farm and delicious meals to cook, and a few ways to keep the dupes happy between the shifts of all that heavy digging we make them do. All the industrial machinery is pretty ugly to the dupes’ eyes, so the game encourages us to spam “art” to decorate their quarters, and it’s all quite hilarious. And, considering how much additional content has been released so far for Don’t Starve, we can hope there will be more for Oxygen Not Included in the future. 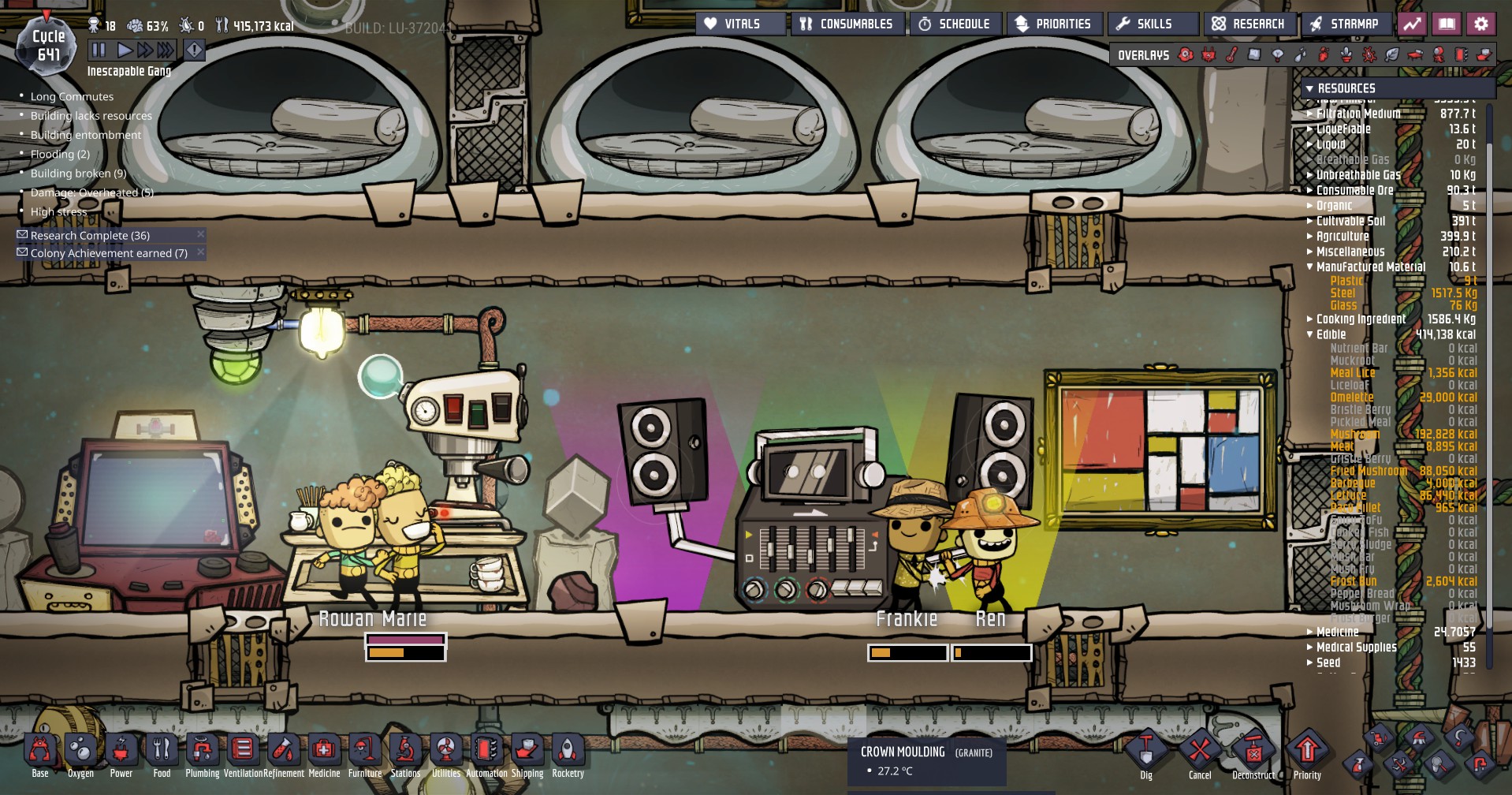 It’s definitely one of my favorite games so far. I could rant about it forever, but I’m already itching to get back to playing. That rocket isn’t going to build itself!

The game, graphics, pictures and everything else associated with this game are the property of Klei Entertainment, all rights reserved.

I rate this 10 out of 10.  What did you think?  Please take a moment t to let us know what you think of the game by selecting the Users tab above and entering your own ratings for production etc.  We’d love to see your views.

This review is copyright Ekaterina Fawl.  Not for reproduction without the authors permission. Or you could enter your comments in the forum post Here: Oxygen Not Included – What a Great Game!