In this episode, Lister takes the initiative and shows that he is more than a pile of smeg! Holly introduces the show with “…. In the three million years that we’ve been away, it is my fond hope that mankind has abolished war, cured all known disease and got rid of all those little saloon doors that you get in trendy cloths shops.”

The first scene is of Lister and Rimmer arguing about work. It seems that Red Dwarf is not at Light Speed and Lister is stuck with Rimmer and having to do menial chores. He would clearly prefer to go to the pub. It’s Saturday night after all.

Rimmer is still in control because he has hidden Lister’s complete store of cigarettes and will only give Lister one for each day, provided he obeys Rimmer’s orders. Lister leaves the Drive Room armed with four and three quarter cigarettes (he’d been a bad boy for only a quarter of a day all week! I find that hard to believe).

Lister leaves to get ready for the evening’s entertainment. He asks Holly why he had to bring back Rimmer as the ships hologram. “And who should I have bought back then?” Asks Holly.

“Anyone!” Replies Lister, “Chen, Peterson, I mean, Herman Goering would have been more of a laugh than Rimmer. Ok, he was a drug crazed transvestive, but at least we could have gone dancing!”

Holly tells him that the reason he brought Rimmer back was because he was the best person to keep Lister sane. “Crap.” Concludes Lister. “What about Christine Kochanski? You could have bought her back!”

“In your entire life, your conversations with her totalled 173 words. …….. in terms of wordage, you had a better relationship with your rubber plant!……. He’s the person (Rimmer) you knew best, over 14 million words in all”

Holly replies rather eloquently, “John Paul Sartre said, ‘Hell was being locked in a room forever with your friends.”

Lister tells the computer, “But his friends were all French!” He goes off alone to the Ships disco and sits there alone. He sadly reminisces the ‘good o’l times (and in particular, Christine Kochanski).

Meanwhile, the Cat has found Rimmer’s secret store of cig’s. Rimmer tries to get the Cat to put them back, but only manages by doing a deal which involves teaching the Cat how to use the food machine to get as much fish as he would like.

Next day, Lister is playing his guitar in his quarters. Rimmer enters the room and begins having a go. Lister quietly asks if he remembers Christine Kochanski. Rimmer tells him that he did. He didn’t remember her fondly, he always thought that she had a chip on her shoulder.

Lister tells Rimmer that he wants to turn Rimmer’s hologram off and turn on Kochanski for only four hours. Rimmer understandably refuses to play along. They discuss it, well, Lister tries to persuade him…

“No don’t say no. Just think about it, don’t just dismiss it.”
“Alright, let me think about it.” Says Rimmer.
“But you’re just gonna say no.” adds Lister impatiently.
“Don’t interrupt, I’m thinking about it.” Rimmer commands.
“But you’re just gonna say no!”
“Not necessarily, I’m mulling it over” He pauses for a few seconds and the decides, “yyyyyyy……No”

Lister tries to continue the discussion but Rimmer has had enough. He holds up an imaginary black card and tells him that the conversation is now over. Lister is upset, but he completely fails to persuade Rimmer. “Ok!” threatens Lister. He has a plan.

Lister informs Rimmer that he will pass his exams and become his superior. Rimmer will the have to obey his request for a date with Kochanski. “On that day Lister, Satan will be skating to work!” Rimmer scoffs.

Next day, sure enough, Lister is studying for his exams. Rimmer wakes late to find that his arm has been substituted with the holographic arm of Peterson. Holly informs him that his holographic data has been corrupted and that he will need a few minutes while he restores from a backup.

In the Drive Room, Cat is gorging himself with ‘the fish of the day’ from the food machine. “They’re MINE! The fish are MINE!” he says, greeting Rimmer as he enters, looking for Lister.

“Holly, as senior officer onboard this ship, I order you to tell me the whereabouts of Lister.” He commands.

“Holly, that’s an order, you stupid ugly Goit!” You just know something is about to happen to Rimmer. Holly rarely lets Rimmer get away with personal insults. “Ugly” replies Holly, feeling somewhat insulted. “I’ll have you know that I chose this face out or the billions available because it happened to be the face of the greatest and most prolific lover that ever lived!” He then comically sticks his tongue out at Rimmer.

“Really,” replies Rimmer sharply, “then he must have operated in the dark a lot!”

“You what!” (Holly is getting nicely warmed up.)

“And when are you going to give me my arm back?” adds Rimmer. “I refuse to walk around all day with Peterson’s arm. You know what he’s like, God only knows where this arm has been.” With that, Rimmer’s right arm slaps him in the face! “Ah, what’s it doing?” The hand slaps him again, then two fingers try to poke his eyes. Rimmer outsmarts the hand by placing his left hand over his eyes. “Look, I’ve outsmarted him” he exclaims. Then the hand gives Rimmer a vicious blow to the groin.

Holly fixes the problem soon after, but you can’t help feeling that it wouldn’t have occurred at all if Rimmer hadn’t been so offensive. Holly always has the last word (in this series anyway).

The Cat looks on, “Hey that was good! You should have finished on a song, then it would have been perfect.”

Rimmer continues to look for Lister. He enters the ships cinema where he finds the two skutters watching a Western and pretending to do some work. The skiving skutters are chastised by Rimmer who then storms off to continue his search for Lister. (But not before one of the skutters gives him a two fingered salute).

Lister is in the Teaching Room watching a video and taking notes. Rimmer enters and informs Lister that he has no chance of passing his exam. “You have the brains of dioreah and the breeding of a maggot!”

He then goes on to test him on some engineering questions. Lister cannot answer any of them. “Those are basic engineering precepts Lister, how do you expect to pass the engineers exam?”

Lister is taking the lowest grade exam that will provide him with a rank above Rimmer. Rimmer is clearly worried by this. Later, he tries to persuade Lister that he doesn’t really need to take the exam. He tells him that the cigarettes are in pipeline 22. But Lister already knew, Rimmer it seems, was betrayed by the Cat. He tries to persuade Lister that there is no need to be a ‘loggerheads’, “Laugh, laugh, laugh, chuckle guffaw, giggle. That’s Rimsy and Listy….. There’s no point in letting something small and silly like this come between a friendship that we’ve nurtured like a small flower, petal by petal and watch blossom and bloom into something rare and special.”

“Ok then,” replies Lister confidently, “give me Kochanski?”
“Smeg-off dishwasher breath!” answers Rimmer, “You won’t turn me back on!”
“What Rimsy-wimsey-mimsey my bestest ever pal?” ads Lister.
“Lister, I order you not to take those exams.” Says Rimmer.

Lister then black cards Rimmer. The conversation is over. Rimmer insults him by saying that he’s more like him than he is …. Erm… I think. When it comes time to take the chef’s exam Lister is interrupted by the lovely Claire Grogan playing Kochanski’s hologram. The two chat for a while, but Lister notices that there is something different. She tells him, “I could never love you, I need a man whose going places, up, up, up lickety-split!”

Lister tries a test, “So it didn’t mean anything to you then… you know when we made love on the snooker table behind the bins.” Rimmer changes back but Holly, true to form, fails to restore Rimmer’s left nipple and leaves him with Kochanski’s breast. Rimmer immediately asks for his nipple back. He squeezes his new breast tenderly and leaves asking Holly to take his time.

Lister finishes his exam and walks over to what I presume is a marking machine (it looks just like a food machine to me) for his results. Rimmer appears by his shoulder and asks Lister how well he did. Lister reads the result and walks off. Rimmer calls after him, “How did you do?”

Lister looks back and says, “How did you do, Mr Lister SIR!”

And there show ends. I don’t know about you, but all this character and scene setting leaves me impatient for the next series. Hopefully, the next show will improve. 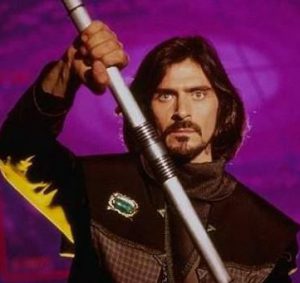 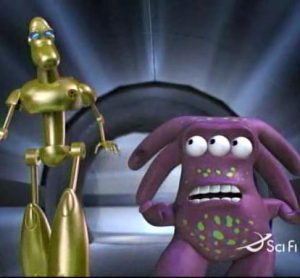 Tripping the Rift: S01E01: God Is Our Pilot (Alternate Review) 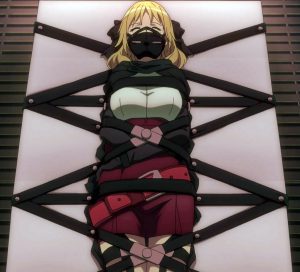