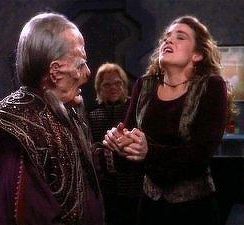 A Narn cruiser is destroyed saving civilians in the ongoing Narn-Centauri war. G’Kar asks for intervention by Earth but Sheridan isn’t sure whether he can help. He promises to try. There’s a good quote in the scene between Sheridan and G’Kar that I like: “Everyone in this room knows that the first casualty of war is always the truth.” You’re absolutely right there, John.

The Lumati ship arrives, and poor Ivanova is elected to play host to these aliens so she can continue learning “the fine art of diplomacy“. Wonder if Sheridan would have put her in charge if he knew that in the first season she threatened to rip someone’s lungs out? Oh well!

G’Kar tries to get Minbari help in the war but Delenn turns him down, going on about how she was there when the Minbari war with Earth started. G’Kar asks if he must beg. (Well, no, but it would have been fun to see… Sorry. I like G’Kar.) Another good quote here: “When you have been crushed beneath the wheel for as long as we have, revenge occupies your every waking thought. When everything else had been taken from us, our hatred kept us alive.” Delenn basically accuses G’Kar of wanting to do it to the Centauri before the Centauri do it to the Narns.

G’Kar sounds defeated when he says, “Then we must face the Centauri alone.”

Some Centauri are tormenting the Narns. Frankly, they should know better than to cheese off the Narns, but anyway, Zack breaks it up. Later he ends up shooting a Narn to stop a fight between these guys.

Ivanova has the unfortunate job of greeting this total git of a Lumati ambassador. He won’t talk to her directly but only through his ‘interpreter’. It’s apparently beneath him to communicate directly with an inferior being. Like I said, a total git. Ivanova looks way put out, not surprisingly.

There’s also a subplot with Londo realising that he doesn’t really have many friends. People only associate with him because they want favours. He says to Vir, “I wanted respect. Instead I have turned into a wishing well with legs.”

G’Kar and Sheridan get into a shouting match about the conflict on the station between the two groups. All that testosterone in the air… good scene! Sheridan: “We can go round and round about this all night long figuring out who started what, and it’ll take us back a hundred years before we’re done!” Then he says, “Babylon 5 is neutral territory and I will not have you turn it into a war zone!” Right, John, that’s next season. Sheridan threatens to chuck the Narns off B5 if G’Kar can’t put a stop to this.

Meanwhile, Ivanova’s visit with the Lumati ambassador isn’t going so well. The guy manages to annoy Franklin (actually, not that hard a thing to do) by spouting some sort of weird version of the Prime Directive. They don’t help or hinder, evolution must run its course. It’s not fun being on the business end of this sort of thing, let’s face it.

Okay, so Londo is still having this crisis about friendship and tries to get Garibaldi to have a “chemically inoffensive” drink with him. He even pays Michael the money he owes him. (Take the money and run, Michael!) Garibaldi finds it hard to be friendly: “I don’t know you anymore, Londo. Maybe none of us do.” Shame. All Londo wants is a real friend, someone who isn’t trying to get something out of him. Garibaldi says he might be back later, but with all the commotion on the station, he doesn’t come back. Poor Londo waits for him until closing time. As we say in South Africa, “Ag shame.”

G’Kar tries to calm the Narns down, but they’re too angry for it to work. When G’Kar leaves they murder a Centauri and decide to off all the Centauri on B5. Franklin later does the autopsy on the guy, and tells Sheridan and Garibaldi that it was probably a Narn who did it. (They might need another ‘real big lineup room’!) Sheridan wants to stall on telling Londo until he can come up with some way of defusing the situation.

Back to the Lumati git. He comes to Ivanova’s quarters because he wants to see other parts of the station. (He picks up Ivanova’s nightie, and seems verrry interested in it!) Ivanova starts getting cranky (took her long enough) and agrees to show them any part of the station they like.

Meanwhile, in rapid succession, Na’Toth sees the Narns buying weapons, Earth refuses to help the Narns, and Na’Toth informs G’Kar of the Narns’ plot. G’Kar goes off to confront the Narns because he has to reclaim his authority.

The Lumati wants to see Downbelow. Ivanova is explaining this underclass to him and he is impressed by the idea of “isolating the genetically inferior”, ignoring her protests that it wasn’t intentional. The git finally starts talking to Ivanova directly. He says the Lumati will agree to an alliance.

Sheridan and Delenn hatch a plan to help the Narns, but it has to be unofficial. Later when they tell G’Kar he is very hurt and disappointed that all the Narns are offered is left-over food, the chance for some refugees to escape, and no arms shipments. (You’d think Earth would be grateful – after all, the Narns did help them in the war against the Minbari. In fact, G’Kar is the one who helped them!) Ivanova is ready to conclude the deal with the Lumati, but boy is she in for a big shock when the ambassador wants to conclude it by boffing her! (We know Ivanova likes girls, anyway…) It’s quite funny how she makes up an excuse to get away! She tells Franklin, “Nobody told me that this involved having sex with an alien.” Not to mention that she can’t tell Sheridan she screwed up the alliance because she had already told him it was a done deal! Franklin is rather unhelpful: “Well, you could put a bag over his head and do it for Babylon 5.” Right, Stephen, you try that one – not! (Although, knowing Franklin, he’d probably use it as a chance to gather xenobiological information.) He offers to give Ivanova something to make her sick. The Lumati ambassador won’t know it’s a ruse because he doesn’t know anything about human biology. This gives Ivanova an idea! When the Lumati arrives at Ivanova’s quarters, she’s ready. BOY is she ready! Full sex-kitten bearing and outfit. She implies that doing ‘it’ “human style” would be too much for him, so of course his pride makes him insist that they do it “human style”. The poor guy never had a chance!!

Ivanova proceeds to dance around him, hanging onto his hand and reciting the following: “Boom shabalabalaba, boom shabalabalaba! Hey there, hey there, three bags full! You come here often? Yes, I do! Dinner, shabalabalaba! Drinks, shabalabalaba! Kiss kiss kiss kiss kiss kiss GRAB! How do you like it so far?” The guy tries to get a word in, but she just carries on: “I slept with you the other night. You didn’t call, you didn’t write! I think you did it just for SPITE!” Susan is really getting into it now! “Yes! Oh, yes! Oh YES! Oh! YES! Tell me about your portfolio! Oh yes, yes, yes, yes! Lie to me about your family! Oh yes! Oh yes! Oh yes! Yes, yes, yes, YEEES!” She stops. “G-d, you’re good.” The Lumati ambassador just looks confused. “What do I do now?” he asks. “Old style? You roll over and go to bed. New style? You go out for pizza and I never see you again.” Gotta hand it to that Susan, she sure does know how to show a guy a good time. The interpreter is impressed. He kisses her hand before trotting after the ambassador, cackling.

Na’Toth brought the Narn responsible for the Centauri’s death to Sheridan, and now Sheridan must try to convince Londo not to go ballistic. Surprisingly, Londo is reasonable. He says that the dead Centauri was a troublemaker with no one back home to fight for his name. He wants the Narn deported, his things auctioned and the proceeds donated to the Centauri war fund. Sheridan meets up with Ivanova and they congratulate each other on their respective jobs well done. Sheridan gives Ivanova a present that the Lumati left for her. She opens it. The card says, “Next time, my way.” The present is a weird object, the usage upon which I do not wish to speculate! Sheridan gets the right idea and asks, “Commander, is there something you’d like to tell me?” Ivanova has the grace to look abashed.

The last scene is quite poignant. Garibaldi finally meets Londo in the casino for that drink. He thanks Londo for the way he handled the whole thing with the Narns and the dead Centauri. Londo just says, “Well, it would not bring him back.” He basically did it to make things easier for everyone concerned. He picks up his drink. “It is good to have friends, is it not, Mister Garibaldi? Even if, maybe, only for a little while?” Michael picks up his own drink. “Even if only for a little while.” 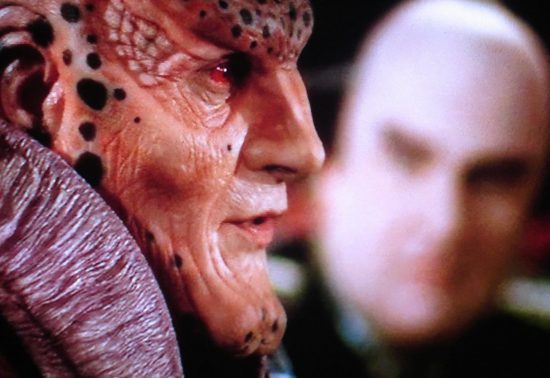 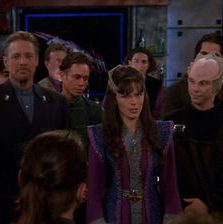