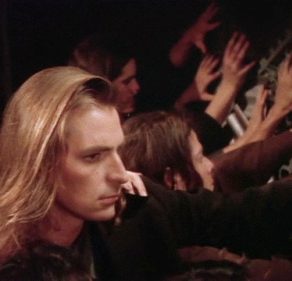 Babylon 5 really begins to hot up in this episode, in more ways that one. It opens with a bedroom scene in Lockleys quarters – naaa, it wasn’t particularly rude, but we did see Captain Lockley in a new light or at least her underwear, and very pleasant it was too (she definitely works out by the way). She wakes from a troubled sleep and discusses, in her mind, the political difficulties on the station. The teeps that are hold up in Brown Sector and there are raids on Alliance ships. It is affecting the moral of her crew. Lockley believes that the teep situation requires the services of a particular expert. She calls Earth Gov. for Bester’s help.

Later she visits Brown Sector to see how Zack is getting on with breaking through the fortifications put in place by the blips. They are completely secure. Byron’s Telepaths have welded shut the doors and put extra metal sheeting up. When Zacks men attempt to burn through the telepaths group together and send thoughts of danger to the workmen. The workmen then refuse to continue in the belief that there is a bomb or some other danger behind the door.

Lockley puts her head to the door trying to sense what is going on. She feels something because, against Zacks advice, she decides to pay Byron a personal visit by squeezing through the air ducts – alone. Byron sent her a message telepathically hoping for such a reaction.

On Centauri Prime, Londo is discussing an anomaly with G’Kar. He can’t understand why production of weapons and war materials has increased by 15% when there is no war with anyone. G’Kar dismisses the idea and offers Londo some Fresh Spoo that he stole from a tray headed for the South end of the Palace. Londo thinks that to eat fresh Spoo is disgusting, it needs to mature. ‘Only Narns can stomach fresh Spoo,’ he says. G’Kar considers that if he is supposed to be the only Narn in the Palace, why was fresh Spoo headed to the South end. He considers that a one or more Narns are still being held in prison. They go off to investigate. In the dungeons Londo and G’Kar find N’Toth an old female Narn buddy of G’Kar. G’Kar is outraged and demands her release immediately. Londo explains that it is not quite that easy. The only reason that she would be there in the first place would be because of a direct order form the Emperor and only he can rescind such an order. This enrages G’Kar even more. Londo tries to quiet him by relating a story of a guard who had been ordered to stand in the centre of the palace courtyard to protect a flower (the first of Spring) by the Emperors daughter. 200 years later a guard was still there protecting nothing, not knowing why, long after the flower, the Emperor and even the princess had gone. (Good grief, the similarity between the Centauri monarchy and the old British Empire is uncanny sometimes). Londo hatches a plot to smuggle N’Toth out of the dungeons.

Meanwhile, on Babylon 5 Lockley strips off again (thousands of Sad Geezer dudes all over the world cross their legs), alas she doesn’t exactly strip off, but she takes off her tunic and unarmed, makes for Teep Central through the air vents. Garibaldi discusses this with Sheridan in the Council Chamber.

Garibaldi points out that the teeps in Brown sector are not the problem, he thinks that the ones that got away are the most dangerous, especially since they might resort to sabotage. Sheridan considers this and while he does so, Garibaldi places a piece of mangled metal on the table and tells the President that it is a small piece of a Brakiri ship that was blown off during one of the raids. Sheridan is surprised, the Brakiri do not make un-provoked attacks. The Drazi (the victims of the attack) plan to introduce this piece of evidence at the counsel meeting tomorrow.

Sheridan can’t believe how difficult things have become lately, in one of his rare ‘Woe is me’ sessions, he asks Garibaldi a what’s it all about question. Garibaldi, philosophical as ever, replies that the human race measures its historical achievements by the wars or at least conflict. Garibaldi believes that it’s ‘exciting’. People like to see things ‘fall apart and explode from the inside out, and right now, we’re that something’. My video buddy, Nancy, was right, this is a rare glimpse of the old Babylon 5, a lovely exchange between two old pals who are a little sick of their lot. That warmth between primary characters of the series has been missing so far in this season and it was nice to see it return. Lockley gets through and meets up with Byron and the rest of the Teeps. He has no real message to give her other that to thank her for the efforts to bring the problem to a peaceful conclusion. He re-iterates his belief that the telepaths were created to fight the Shadows and that they deserved a homeworld of their own. He wanted her to know this and that he appreciated her fairness. But he was NOT about to surrender. Lockley leaves empty handed.

On Centauri Prime, Londo engages the services of a young woman so that he can take her clothes and use them to smuggle N’Toth off the planet. This he does successfully.

On Babylon 5 the Counsel are arguing about the raids. Apparently debris from ships of all races has been found at the scene of the raids. Sheridan points out that a closer examination of the pieces of debris show that they were CUT off not blown off. The members of the counsel are confused but each declares that they will step up the patrols and shoot any hostile ship, no matter what the race. Later Sheridan points out to the Brakiri, the Gaim and the Drazi that any infringement of the constitution of the Alliance will be met with harsh force from Whitestars. If they move on their own, they would have to take the consequences. The three ambassadors leave. They are annoyed that the Alliance has threatened force when all they wanted to do was defend themselves. I can’t understand their attitude. No one has any evidence, sure it’s frustrating, but Sheridan is right – obviously! Why are the Alliance ambassadors so pig-headed?

Then our friend and enemy, that bastard Bester arrives on Babylon 5. He tells Lockley that, despite his advice to the contrary, she gave them sanctuary on the station. But he would sort the problem out. Now Bester was here, everything would soon be under control.

Some of the escaped renegade teeps steel some weapons from an armoury and attack Zack, Lockley, Bester and some workpeople as they attempt to break into Byron’s quarters. Two of Zacks men are killed but Bester is unharmed. When Lockley asks if he is ok, he replies with some smart-arsed statement concerning his depression about the inflation rate and how hemlines are coming down, but other than that he is fine. Zack is understandably annoyed by Bester’s attitude but Bester quickly retorts that they were mundane’s not his people.

Byron is upset. He has sensed that the renegades are killing in his name. This is not the way he intended things to turn out. Bester’s bloodhounds begin rounding up the rogue telepaths and Lockley strips off (I’m really getting to like this character, I think that dear Lizzy Lockley is a closet naturalist) in her room worried about what tomorrow will bring. What she really needs is a Sad Geezer to cuddle up to and poor out her troubles – Yo Lizzy, I’m over here luv!

This was a great episode, you just know that some heavy stuff will happen in the following episodes. I can’t wait!

For all you male Sad Geezers out there – My most profound and profuse apologies!  I rip-off most of the pictures for this guide from the massive, comprehensive and WONDERFUL Becky Murphy’s Spoiler Junkies Page. But I’m afraid Becky didn’t scan any semi-naked piccies of Captain Lizzy Lockley and I don’t have Becky’s resources  – sorry! 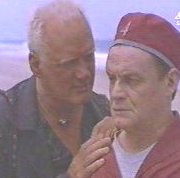