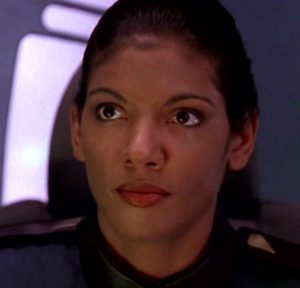 Dr. Sara Chambers is the chief medical officer aboard the Excalibur. In the fake pilot episode “War Zone” we are told that she is in charge of a team of elite doctors and scientists who will do research on the ship. But that was the last we ever saw of that elite medical staff. In the rest of the episodes she was just like any other chief medical officer on a starship.

If you were to see Chambers in a bar, she’d be drinking whiskey. I don’t have anything to back that up, I just see her as a whiskey drinker.

Sara Chambers is a brilliant research doctor. But she feels as though she doesn’t hold a light against her sister, who’s stuck on Earth. Chamber’s was “lucky enough” to be on Mars during the Drahk attack, so she wasn’t infected with the plague. Her motivation for finding a cure is driven mostly be her desire to save her sister.

That’s not say that she doesn’t want to cure every other being infected with the plague! Unlike most realistic chief medical officers, Chambers follows a long line of Sci Fi doctors who go on away missions, or as this sadgeezer like to think of it: house calls. She’s can be often found planet side analyzing the environment and helping to find a cure.

Oddly enough her medical peons are rarely sent in her place. one mission that comes to mind is when Chambers was sent to investigate a garbage ship to look for evidence. The entire time I kept thinking that she was going to mutter “I’m a doctor not a janitor”. Chambers is a doctor first, and a solider last, actually past last. She was conscripted to help with the effort, so she is not in Earth Force by choice. She’s more passionate then her fellow officers who base decisions more on logic and results. She understands that things take time, as opposed to Gideon who wants results now. Her compassion allows many members of the crew to come talk to her about their problems and concerns because they know that she will listen and help them out. on the flip side, her lack of military experience makes her a poor leader on a military ship.

Her leadership skills are often blunt, and at times coarse. But her medical staff realizes that stress that she’s under, and silently excuse it. Chambers is played by Marjean Holden. Interestingly enough Holden was also in the backdoor pilot, A Call to Arms, but played a different character in that movie.

Actually her character wasn’t even important enough to have a name, just “Earth Force Navigator”. But it was enough to land her a starring role in the Crusade series. 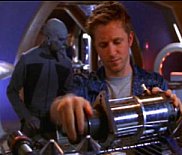 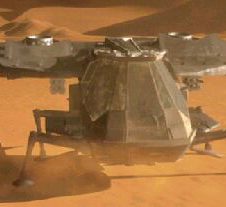