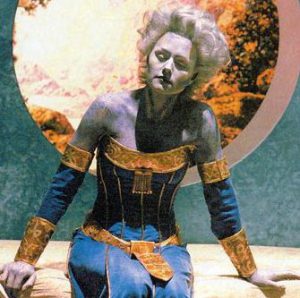 Delvians are blue, and they are, to put it simply, plants.  Being plants, they are extremely… receptive to light, causing elation, which has something to do with photosynthesis and her stomata the small yellow marks that cover her body.  While most of the time you could get along fine treating Delvians no different than you would someone who wasn’t a plant, things start to get a bit tricky when they are deprived of food for too long, As can be seen by Zhaan’s reaction to near starvation in Home on The Remains.  They start to, for want of a better word, flower, and get pretty touchy in the process if Zhaan is any kind of example.  They then release massive quantities of spores, and would die soon afterwards if they don’t eat something, except by this time it has to be meat.

Some Delvians, like Zhaan, have devoted their life to the priesthood, becoming a Pa’U, or Delvian priest.  This is no easy thing to become – it takes many years of dedication, belief and self-control.  But seeing as Delvians live for centuries anyway (Zhaan is over 800 years old), the time thing really isn’t an issue.  There are different levels of priest (Zhaan being a Pa’U of the tenth level), depending on how advanced you are in … whatever it is Delvian priests do.  Although this has never been made entirely clear, it seems to be a kind of telepathy, or psychic power.  In Rhapsody In Blue, Zhaan declares herself a ‘Pa’U of the tenth level, able to protect’ – in this case protect John Crichton from the psychic attacks of another Delvian.  They can also have the power to alter the memories of a person, and change what they see.  In ‘Rhapsody in Blue’, Delvian priests change John Chrichton’s memories to keep him occupied while they attempt to corrupt Zhaan.

Delvian priests eventually all seem to succumb to something called ‘the Madness’ , when they lose control of their senses and inner calm that they have learnt by following the priesthood, and, well … basically go mad, although it is not known if this only happens to Delvian Priests or to all Delvians, since the only ones that Moya’s crew have ever come across have been priests.  It takes a great deal of control and many years of inner torment to overcome the Madness – Zhaan managed to do this in her many years in prison, and is a secret that other Delvian priests have tried to steal from her in the episode ‘Rhapsody In Blue’.

Delvians are probably the cheapest dates in the galaxy.  To ‘get off with one’ simply flash a bright light in their face and they will go all gooey.  If the blue skin is a turn-off however, note that you are likely to be disappointed if you want to make love to a Delvian with the lights off.

As a general rule, most Delvians dislike Peacekeepers, and Sebaceans in general, as they are seen as too warlike in nature – Delvians are a very peaceful and pacifist species.  There are, of course, those few Delvians who want an alliance with the Peacekeepers.

Zhaan was sent to prison for killing the leader of the group who wanted this alliance.  She described herself as ‘the leading anarchist’ of the group who opposed coalition.  The man Zhaan killed was her lover – she killed him while in Union – a kind of merging of minds and souls which seems to be the Delvian equivalent to sex.

Discuss this Culture in the Farscape Discussion Forum

Almost Back – Current Status and Plans 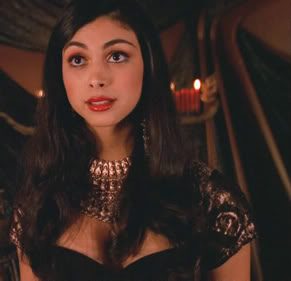