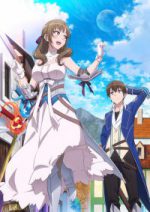 Just so you know, you can vote too!  Select users tab above the review block and rate the epsiode yourself.

Although I didn’t mention this in the original Summer Season 2019 Anime post a few weeks ago, I thought it should be reviewed as it’s a lot of fun.

You’ll never guess what this title stands for…. “Do You Love Your Mom and Her Two-Hit Multi-Target Attacks?” No kidding, it sounds even better in Japanese, “Tsujo Kogeki ga Zentai Kogeki de Ni-kai Kogeki no Okasan wa Suki desu ka?” and some very astute person decided that this was too much of a title for your average anime fan, so they re-named it, “Okaa-san Online”.

The series is based on the “momcom” fantasy light novels written by Dachima Inaka and illustrated by Iida Pochi about a poor dude reluctantly travelling around a World of Warcraft type world with his OP (Over-Powered) mother in tow. A high-schooler, Masato Oosuki, has been willingly drawn into an RPG world with his doting mother as part of a secret government programme. Masato is an experienced RPG gamer and keen to show off his gamer skill – his mother however, is a over-powered, dual-wielding, multi-target specialist!

I watched the start of the first episode and yep, I actually did say, “Oh good grief, not another Isekai?!” but quickly bit my tongue as I laughed. This was a fun show and if you can get over empathising with the poor dude about the embarrassment of being trapped in a game with an OP mother, you’ll find this anime great fun! 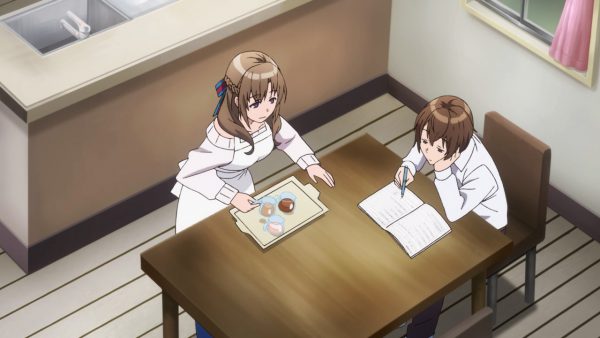 Filling out the Questionnaire

The show opens with a doting mother making tea in the kitchen for her son, Masato Oosuki who is completing a questionnaire about on-line gaming and the family. There are some pretty silly questions but he answers them diligently. When the form is complete, he signs his name and presumably posts it off.

After the opening credits, we see a visitor from the Japanese government Cabinet Office, an attractive but slightly peculiar lady called Shirase (which incidentally, also mean, to inform), she points out that the Cabinet Office have a special programme to get young gamers ‘into’ a special RPG programme where they can play in seemingly real life.

He is asked if he would like to take part in such a programme and Masato, of course, says yes. Shirase immediately jumps up, types in a magical url on his gaming keyboard and presto, she opens a portal – boy I wish it was that easy! 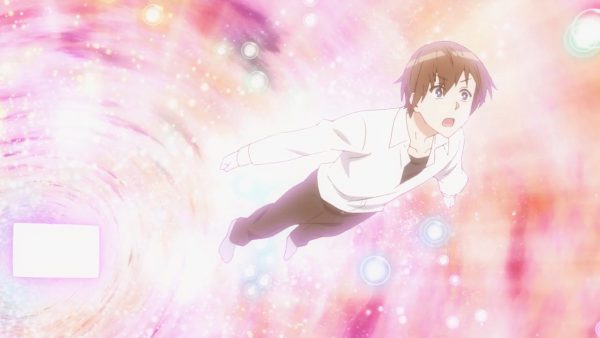 Magically sucked into the Portal to Another World

In the distance, he can hear his mother who is shouting after him, but he confidently whispers his goodbye, this is his chance to become an adventurer and grow as a person. When they meet again, he will be better able to communicate, better able to make her proud of him…… just better! 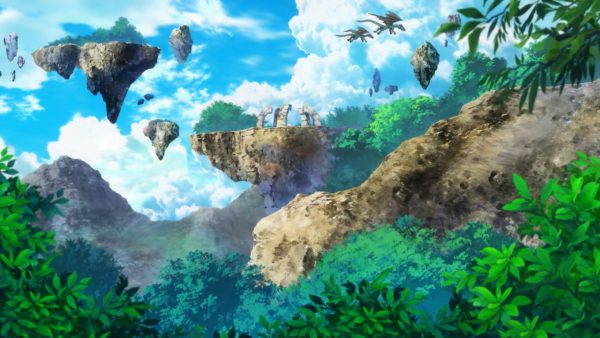 A brave new world to explore with mommy

Unfortunately for him, she is hot on his heals and just as he emerges to the other side to discover a magical, fantastic world full of wonders and interesting places and creatures, his mother shows up and complains about him running off without her. It’s not that his mother is stifling his adventurous inclinations, just that she honestly thinks its where she’s supposed to be and wants to support him and hang out. She’s actually a really nice mom! My mother was a nurse and always wanted to be a car mechanic! She would have been amazing at an MMO and tbh, if she was accompanying me, it would be a blast – she would totally be tanking the mobs! I don’t think the writers are giving enough credit to motherly adventurers out there!

They walk off to the city (the Teleportation Palace to be precise) and meet an awesome dude, the King! – Truly, all Kings should be like this. He asks their names and of course, Masato gives him his real name and breaks rule number one. Masato is now known as Masato in the game, as you know, registering your real name in an MMO is noob thing to do. Worse still (and hilariously), a little fanfare played just to rub in the noobishness of his actions. 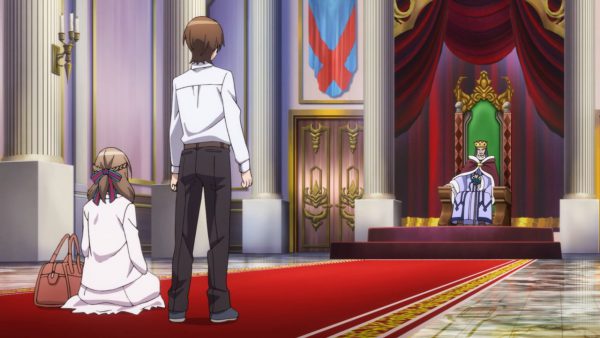 The king of Teleportation Palace

A Visit with the King

Next they are presented with their stats. Masato is a normal hero type and his mother is the same. The King also explains that they are actually in a Closed Beta on-line game. They are using a special technology that they can’t easily explain (lol) to put users ‘into’ the game and it’s now down to them to go and start playing. Also, most of the players were chosen in response to a certain survey (I guess the one he was completing at the start of the episode). The winners were actually the ones that put their names on the survey forms (it was supposed to be anonymous) since it was easier to track them down. The game has a temporary name, MMMMMORPG (Beta). It is a Fantasy RPG in which players can fight, craft items and decorate their house with in game things. Lol, sounds like World of Warcraft.

His mother is more ignorant of what is happening but tries to get into the swing of things. Later, when the King offers them weapons (because nowadays people wont play such games unless they are offered legendary items up front – lol I couldn’t help but snigger, so true), Masato chooses the largest most awesome looking sword, the “Holy Sword of the Great Heavens Firmament. In the distant past when the world was covered in the darkness, it banished all the darkness with a single swing!” The king informs them.

Mom is just trying to keep up

His mother takes both the swords that are left. They are: “Terra di Madre. The very life itself that was born from the land at the dawn of creation. It is known as the Holy Sword of Mother Earth and it became the source of all life in this world.” The second sword, “Altura. A miraculous blade that saved to world from a huge, world-wide flood. It is known as the Holy Sword of the Mother Ocean and is the symbol of the contract between land and sea that split the world between them.” 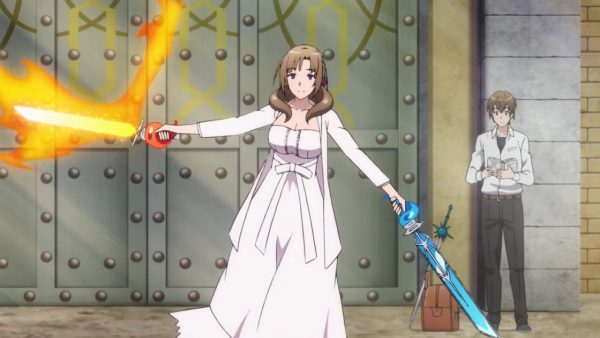 Alas, when the two demonstrate the swords abilities in a training simulator, Masato comes of considerably worse. It seems that his mother has a pair of exceptional area of effect (AOE or Multi Target) weapons that she is really good at using while he has a single target weapon that seems to look better than it performs. He gets quite upset and sulks. He asks his mother why she decided to come through the portal. He said that this is for young men only, not for mothers.

It seems that the government official told her not to explain at first and on top of that she seems a little confused and flustered. In the end, we don’t actually find out if there was any other reason other than her just wanting to hang out with her family.

Masato’s mother takes it upon herself however, to smash the place up so that the guild will take them seriously. Jeez, if I tried doing that to any Guild I ever tried to join, I’d have been ganked out of the game! Luckily, they find Shirase with a bloody forehead, who helps them decide on who would be a member of their adventuring party. 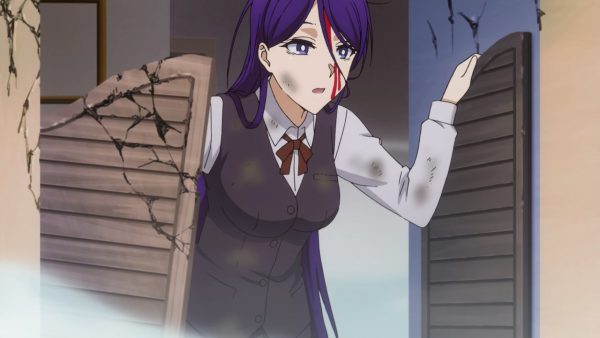 These are, (so far at least), Rushera, a heavy knight, Torino the thief and Sallitey the elf. His mother thinks they are all cute but insists on interviewing them herself since they are all going to be living together.

It was a lot of fun and a nice take on the whole Isekai genre wish is being blasted to death this season – seriously, half the shows I’m reviewing at the moment are Isekai!

This episode had relatively good graphics, the voice acting was good and the direction and story were quite tight.  Characterisation was ok (I really liked the King) but I guess the characters have plenty of room to develop. It isn’t groundbreaking or particularly innovative, but it’s definitely fun and watchable.

At the end of the credits, there was a caption describing the next episode: 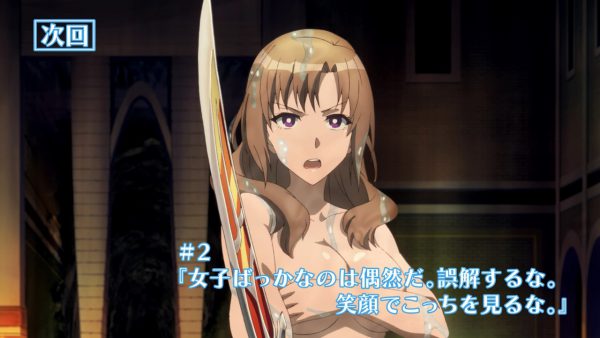 “You stripped off a mothers clothes in front of her son! you must be punished!” I guess I’m just going to have to watch the next episode.

This review is copyright Tony Fawl, not for reproduction without the authors permission.

Do You Love Your Mom and Her Two-Hit Multi-Target Attacks? or Okaa-san Online is directed by Yoshiaki Iwasaki. The characters, story, pictures and design for this show are the property of J.C.Staff, KADOKAWA, Tokyo MX, KLab and BS11 and of course Crunchyroll.  All rights reserved.

Share this:
Tags: Anime Show Preview, Do You Love Your Mom and Her Two-Hit Multi-Target Attacks, Okaa-san Online, Tony Fawl