The first episode is called, Lost Ones from Another World and once you got the hang of it, the show was ok.  This is a show which I will definitely apply the three watch rule before deciding if it’s worth viewing to the end of the series

I hadn’t suggested that this be a show to look out for in the Summer Season Review, I didn’t particularly know about it and the subject matter made me think, initially at least, “oh good grief, not another Isekai?!  The genre is currently being hammered to death.”

The opening sequence didn’t help, it was violent and messy and actually a bit boring – it concerned a group of heavily armed soldiers being beaten up by the magic abilities of a group of adventurers, we didn’t know or care about any of them.  The battle seemed very easy to win and one of the characters actually remarked on the fact that it was like cheating.

Opening Credits: Myth & Roid performed the series’ opening theme song “Panta Rhei”,  which is truly awful!  They are much, much, much better than this.  Really disappointed, I really like Myth & Roid and this was crap.  It didn’t put me off the episode, it just sounded a bland and insignificant indication of the shows content! the opposite of a Myth & Roid theme tune for anime!

The first episode is called, Lost Ones from Another World and once you got the hang of it, the show was ok.  This is a show which I will definitely apply the three watch rule before deciding if it’s worth viewing to the end of the series.

The first part, before the credits, was a scene from the future of the show, a sort of flash forward.  In the next part of the episode, we meet some of the characters involved in the fight at the beginning, particularly the magic wielding characters that seem to be bullying the heavily armed soldiers.

Taichi Nishimura and Rin Azuma are two schoolies that have known each other since they were children (they aren’t much more than kids even now to be honest). They go to the same high school and have a very normal looking high school life. Rin likes playing RPG games in his spare time but it isn’t clear if he is particularly good at them. Taichi is your typical anime big boobed airhead teen girly pal with lots of annoyances. Hopefully her character will develop – I think it will, her character is currently too soppy to fit with the way the show will develop. 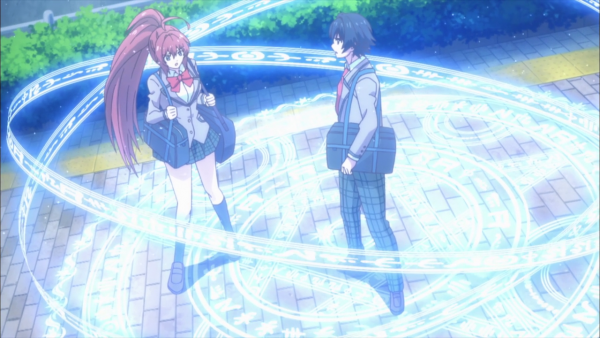 Meanwhile, far away – in another world to be exact, a ritual spell is being cast by a mage to summon something. The mage attempts to complete the ritual but is struck down by an assassin before completing it properly, she seems to ‘magic-something-up’ and, before dying, a portal whisks Rin and Taichi to a new world. 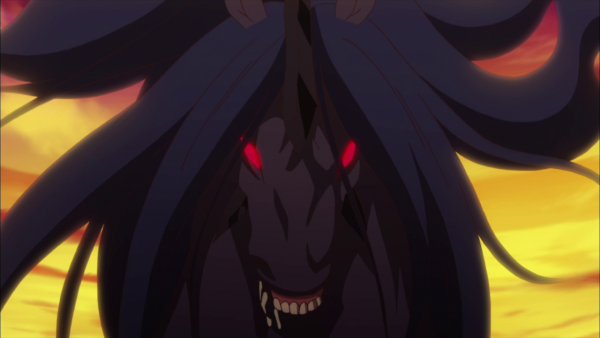 The kids are unconscious and when they awake, they are attacked by a monster with a black glass unicorn horn.  It’s very obvious that they are not on Earth and are in a very dangerous predicament. Luckily for them, they meets some adventurers who want to help.  The adventurers kill the beast and also give Rin and Taichi some money (Rin and Taichi were a sort of distraction and the adventurers were grateful). 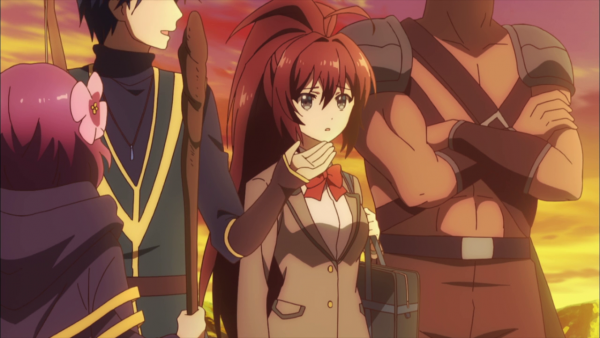 Rin and Taichi head for the nearest town where they hope to enrol in the local Guild as adventurers. Unfortunately for them (or fortunately depending on how you look at it) they are refused because they cannot be ‘categorised’ as expected. Normally a prospective adventurer would simply hold a glass orb and the orb would let them know how powerful their magic is. This would indicate what sort of adventures they were able to undertake. Alas, Rin made the orb briefly shine some funny colours and Taichi made the orb crack. 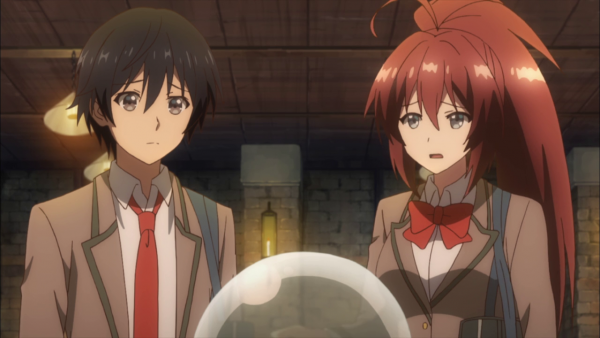 The Guild Master is called and he says that they need to be transported somewhere first and meet someone if they are to be made into adventurers. Rin and Taichi are aware that something is wrong and begin to be a little worried. They are accompanied by one of the Guild Officers (an attractive blonde) to meet Lemia, a seemingly powerful mage dressed in only her underwear!

Lemia quickly determines that they are quite powerful both magically and physically and that from that day onwards, they will be her apprentices. 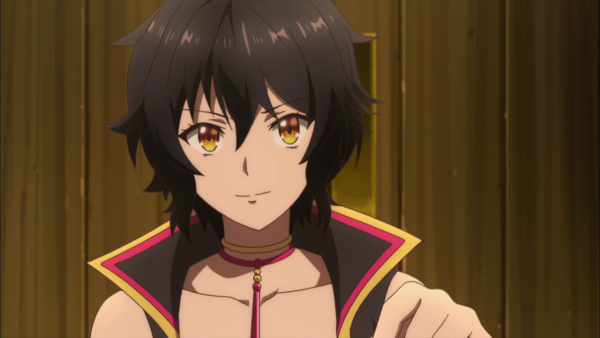 And there the show ends.  It wasn’t as bad as I thought it was going to be and didn’t drag on at all.  The animation was a little cheap and overall the production values for this are not very good in comparison with say Cop Craft or Astra Lost in Space, but it was watchable.  Music was disgraceful but the voice acting was ok.  Direction was pretty good too.  I’ll definitely be watching the next episode but not sure yet if I’ll be watching the series.  I’ll let you know soon.

Discuss this episode in the Isekai Cheat Magician threat in the Anime Forum.

Review is copyright Tony Fawl and not for reproduction without express permission.

This show characters, pictures and everything else associated with the show is copyright Encourage Films, and distributors, AT-X, Tokyo MX, KBS, SUN, TVA, and BS11 and of course Crunchyroll. All rights reserved.

Love is that condition in which the happiness of another person is essential to your own.

— Robert A. Heinlein, Stranger in a Strange Land