This is the biography of the character Yennefer of Vengerberg.  It provides information for the viewers of the TV series although some of the info is gathered from books and the video game (see the Introduction & Background to the series or the series overview for more information).  This article attempts to explain how and why Yennefer acts the way she does in the TV series. Yennefer is played wonderfully by the beautiful Anya Chalotra. 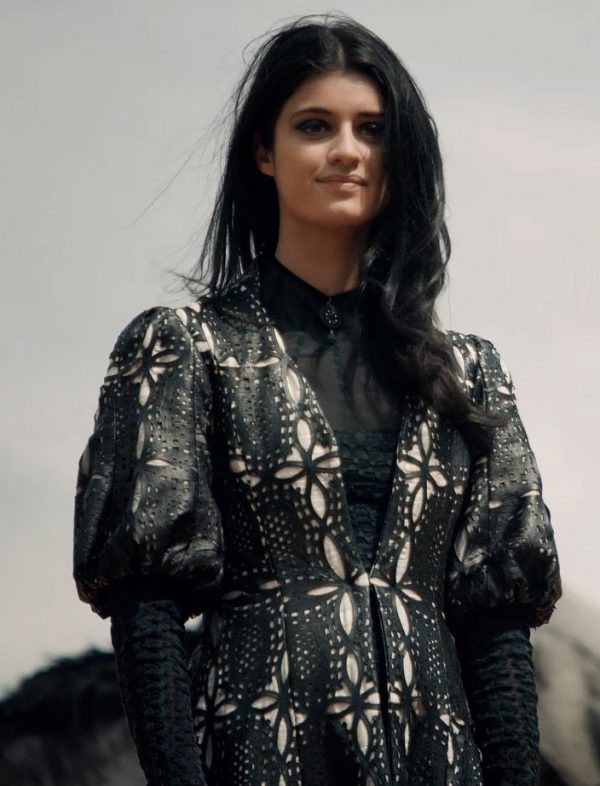 Her Name and Background

Yennefer (aka Yen) was born in Belletyen in the region called Vengerberg. Later in the TV series, she becomes one of the most beautiful and powerful mages on the Continent. One of her few rivals in terms of power is possibly the sorceress Fringilla who later becomes the Sorceress for the Nilfgaardian Empire. 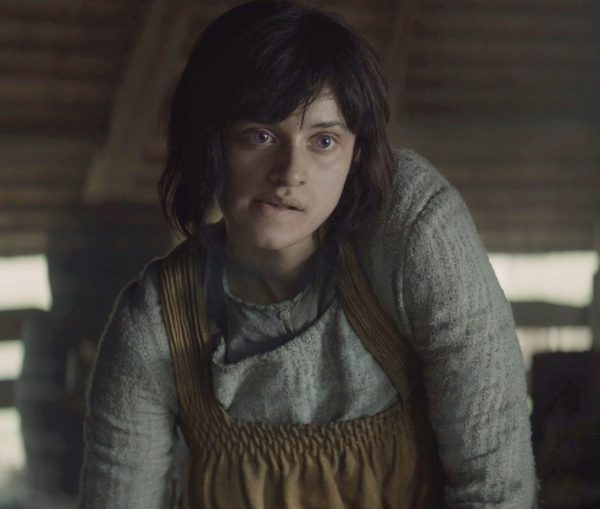 As a child however, things were very different. She was the daughter of a peasant pig-father that had no love for her, she was hideously deformed from birth as a hunchback with a twisted spine and a facial deformity that caused her chin to jut out to one side. She tried wherever possible to be wanted by her family, undertaking chores as best she could and trying to be useful. Her deepest desire seemed to be ‘to be loved’ or at least appreciated. It was completed unrequited and her family seemed to resent and reject her at every opportunity.

The reason for this, and for some reason, it’s not discussed in other reviews and articles on the internet: Her mother had a relationship (the nature of which wasn’t made clear) with an elf and the resultant pregnancy and the development of the fetus seemed problematic. When she was born, her family was shocked by the deformities. I suspect that her father also resents her because she is a reminder of his wife’s relationship with the elf (who died in The Great Cleansing) – the story of Yennefer’s conception is not elaborated on during the series.

The Birth of a Sorceress

In her early teens Yennefer miraculously opens a portal for herself.  Once through the portal, she meets Istredd for the first time.  They chat briefly before he send her back.

A short time later, Tissaia De Vries, the Rector of Aretuza (a school where Sorceresses learn their trade) pays Yennefer’s family a visit. Tissaia had sensed Yennefers raw power when she inadvertently teleported. 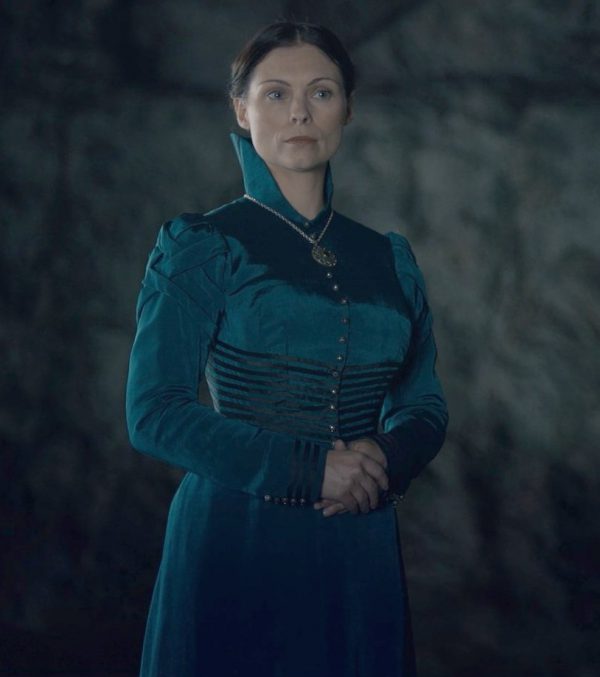 Tissaia asks Yennefer’s father the cost of a pig (10 marks) and then she offers to buy Yennefer! She drives a hard bargain and eventually buys the young hunchback for the princely sum of 4 marks. Yennefer is distraught, not only because she is being sold to the scary (but beautiful) lady. She was easily sold for less than half the cost of a pig. Yennefer was so upset at the rejection by her family and the seemingly cruel nature of her new surroundings that she later tried to commit suicide by slitting her wrists.

Although training at the sorcerers school of Aretuza is difficult and although Yennefer seems a slow learner, it becomes apparent to Tressia (but not necessarily to us) that Yennefer has exceptional abilities. She often takes a break from her studies to meet up with her male friend, Istredd.

Eventually, they become lovers and as Yennefer’s skills improve, her lovemaking takes on silly but funny characteristics.  In this scene for instance, she is making love to Istredd in front of images of the Sorcerers Council.  They clap after the two lovers climax. 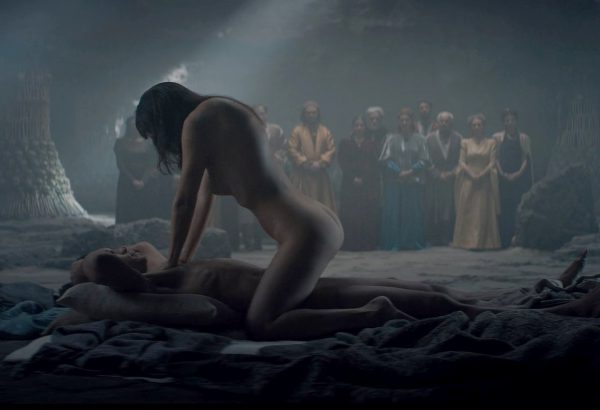 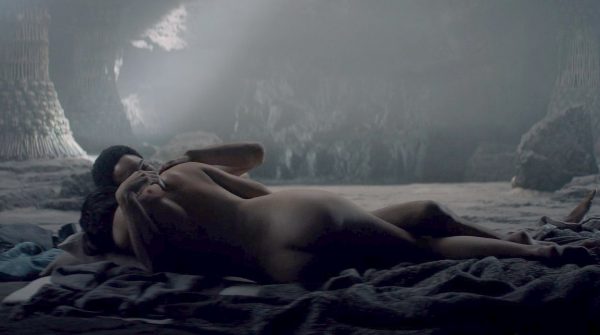 Yennefer improves her skills and confidence and gradually learns that she wants more than the rather conservative Istredd has to offer. She also determines that her looks need to be improved if she is to be taken seriously. This is confirmed by Tissaia who explains that they can decide exactly how they should look, not the world. One of her enchanters is called upon to undertake the task of transforming Yennefer’s deformity and turning her into a beauty.

You tend to notice, that as the sorceresses become more powerful they also become more vain. All the senior magical women are very beautiful and it seems that vanity is a key part of their persona. Yennefer is no different. The cost however, of her physical transformation, is the loss of her ability to have children. More specifically, her womb is removed. Yennefer initially accepted this but soon came to resent the fact that she was unable to have children and this would eat away at her for many years. 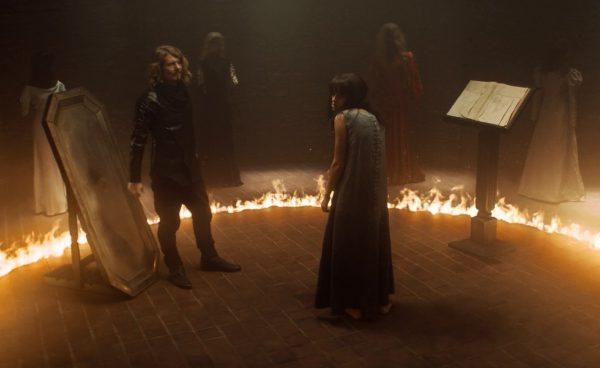 One of the benefits of being a powerful sorceress is the ability to prolong life by ageing slowly. It seems that the more powerful you are, the better you are at staying young looking. In the first season, the story timeline for Yennefer is approximately 100 years (that would be my estimate, it’s possibly a little longer as in one of the episodes, she talks about already having lived three lifetimes).

The loves of Yennefer

Her absolute Achilles Heal is Geralt. Initially she was able to resist his charms but gradually, she came to love him… in her way. Alas, she isn’t the sort of person who actually knows how to love. She hasn’t been loved before except possibly by Istredd who was a little less ‘dynamic’ than she would have liked. Geralt is considerably more challenging and their passionate relationship seems to be on and off but always constant – i.e. they may be having a tiff or be on opposite sides, but they are always there for each other. Initially it is Geralt that makes all the moves, certainly out of friendship, but the dude is a playa so courts her at every opportunity. 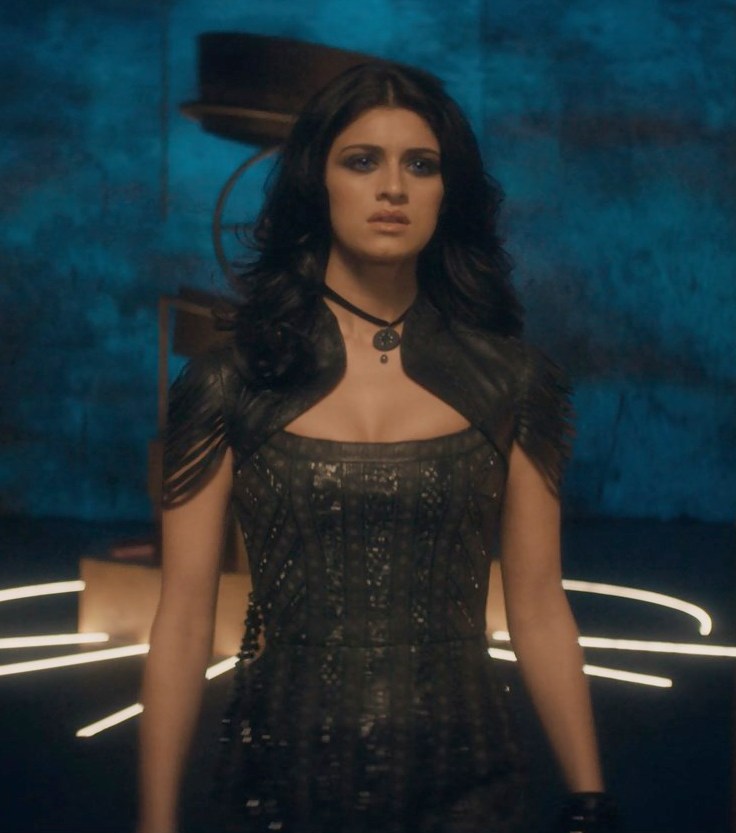 The season ends with them fighting Nilfgaard together and the fateful meeting with Ciri. Yennefer is one the most popular characters in the books and video games. Her depth of character, power, frailty and beauty are great to watch and Anya Chalotra is a great choice of actress to play her. The story, in a similar way to Game of Thrones, demands that she appears naked for a number of scenes some as a hunchback and some following her transformation. She carries this off really well as does her partner in the series, Henry Cavill, although his naked scenes seem (regrettably for the ladies) less explicit. What I’m trying to say as tactfully as possible is that Anya Chalotra carries off playing the character really well with or without clothes!

Yennefer of Vengerberg the Sorceress first appeared in the collection of polish short stories “The Last Wish” and “The Voice of Reason”.

Yennefer is Geralt’s “soul mate” although their relationship is difficult and full of drama. Both Geralt and Yennefer are sterile, which adds another level of tragedy to the mix. Yennefer has a hard time accepting the fact and tries various methods of restoring her fertility.

Anya Chalotra’s character Yennefer of Vengerberg had to suffer for her art in the Netflix series. She told Metro.co.uk: ‘I had a trapped nerve in my back that I had to get massaged out after playing her for so long! It was very uncomfortable. …. We tried to make it as comfortable as possible,’ she added. ‘But because we had to make decisions quite fast, we weren’t able to change the way we’re doing things. I was happy in the choices that we were making. ….. The one that the body double wore was heavy because it was a whole back piece,’ she added. ‘The ones that were under my outfits weren’t. They were very sweaty though!’

This Witcher TV Show biography article is copyright Tony Fawl and not for reproduction without permission.