The episode is called the Dragons daughter and we were introduced to her as the show opened. She assists her father or guardian, to run an orphanage and they both look after some sweet little orphans.

This is the second episode review of To the Abandoned Sacred Beasts (aka Katsute Kami Datta Kemono-tachi e). as mentioned in the previous review, it is a supernatural science fiction fantasy drama anime.

There are some really good anime shows this season and few are as well put together in terms of production and direction as this and because of that, this show may have to settle for ‘good’ but not ‘best’. because what really lets it down is the story. The characterisation and voice acting are all good, and most of the other reviewers are really impressed with the way the story develops but I’m finding it more than a little predictable I’m finding it a depressing line up of blessed soldiers that, through no fault of their own, need to be put down. This is a stupidly depressing premise. I’m hoping I’m going to be proved wrong, but this second show was very disappointing that I am annoyed at having to have wasted 20 minutes. This will therefore be my final review of the saga.

The episode is called the Dragons daughter and we were introduced to her as the show opened. She assists her father or guardian, to run an orphanage and they look after some sweet little orphans.  The guardian dude is called John Bancroft and he is soon called away by some military people to undertake an operation to help the war effort.  The girl doesn’t want him to go but he does anyway. This leaves her in charge and she looks after the orphanage in his absence.

When the war is over, he comes back but is unable to change back into his normal human form.  He attempts to live as a dragon but gradually his actions become more aggressive and unpredictable and the one of his old army officers, Hank, has to put him down. 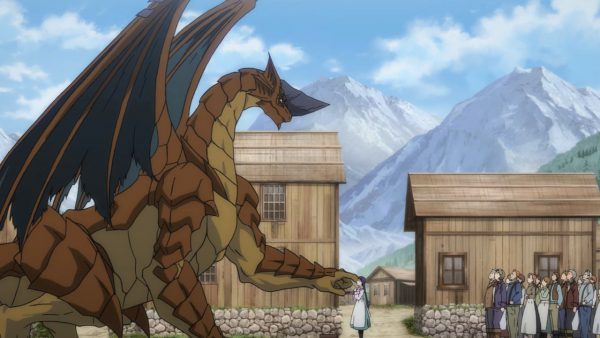 Prodigal Dad Returns as a Dragon

The dragons daughter finds Hank and learns of the predicament of the Blessed Beasts and vows to accompany him to make sure that these noble soldiers are not mistakenly or otherwise killed. 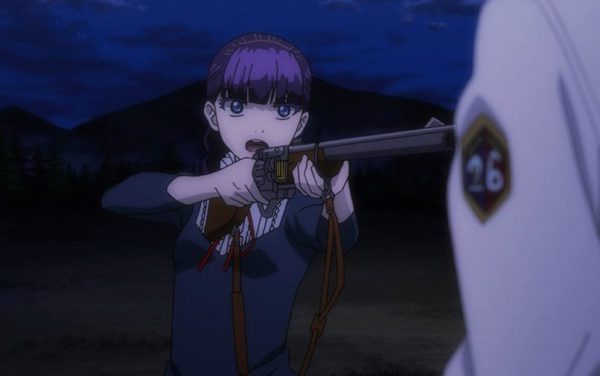 The Dragons Daughter Wants to Know What Happened

There were more details than that but not many. I’d therefore rate this a 6.0 because although the show scores very highly in many areas, the predictability and irritating premise let it down.

This crappy review is copyright Tony Fawl and not for reproduction without permission.

The pictures, characters and everything else associated with the ‘To the Abandoned Sacred Beasts’ series is, as far as I can tell, owned by MAPPA, Tokyo MX, BS11, MBS and Crunchyroll. All rights reserved.