It has a good start and the silly-factor made it interesting and there was lots of fun stuff that I really enjoyed.  Alas, in the end, the show was less innovative than I thought it would be and this will be the last review.

By the way, you can review this episode yourself!  Just select the user tab on the right and star the categories.

It has a good start and the silly-factor made it interesting and there was lots of fun stuff that I really enjoyed.  Alas, in the end, the show was less innovative than I thought it would be and this will be the last review as I won’t be following the show anymore – I might do, but not reviewing.   This third episode is called:

The show opens with a nice and frivolous scene of the two girls (Aku and Luna Elegant) in the bath. They are, would you believe, introducing themselves and Luna takes it upon herself to say that they should be pals as, after all, they are able to be naked in front of each other.

Aku is shy of course, and while the scene cuts away to another part of the room, we hear her say, “Don’t, anywhere but there!”  I guess we were left to make our own minds up what was happening.  I’m pretty sure however, that Aku’s feet were being tickled.

In the meantime, Hakuto Kunai the Demon Lord is busy stashing his loot in the ‘admin locker’.  He comments loudly that in the Infinity Game, he was only allowed to store ten items and this was much better.

As the girls come out of the bathroom in the pajamas, Luna comments on how the kingdom is very safe, there is nothing of any consequence that can cause any serious disruption.

The scene then cuts again to the large breasted lady that we were introduced to at the end past weeks episode.  It seems that she and Luna Elegant they may be related and she has a specially interesting name, “Deranged Holy Maiden, Killer Queen.” (I just know, there are many dudes, saying, ‘sounds like my wife!’ – I wouldn’t of course because although my wife likes to be loved, she also likes to be feared!) 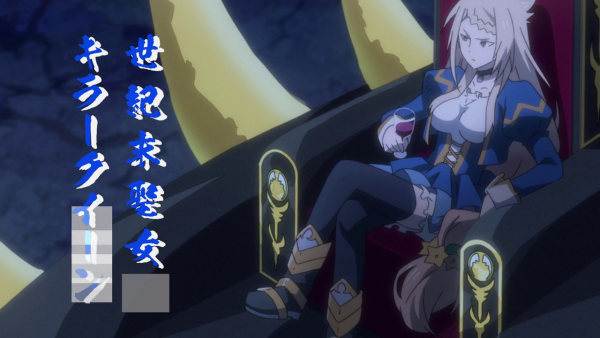 It seems that The Deranged lady with the big boobs is after her sister because she believes that she is hiding something from her about who killed the Greole demon.  She doesn’t actually believe in the Demon Lord, or that he has arrived and thinks its something to do with Luna.  Whatever, she is certainly annoyed (or is that deranged).

Haruka is looking for the Cherub (which he has), the Ophan and the Seraph.  Luna and Aku report that they haven’t heard of them for a long time so don’t know their location.  It may be that the wishing stone at the shrine is actually the Ophan.

Hakuto decides that his priority at the moment is to bolster his coffers and get more money.  He goes into an antique shop and procedes to con the poor and friendly shopkeeper by selling him some dirty old bowl and saying it’s valuable. That’s a little bit mean actually, but he is the Demon Lord after all.

He walks back to the rooms and decides to invite Luna and Aku to dinner.  At that point, the Killer Queen arrives.

The scene then cuts to a group of Demon-Believing Satanists believed that they failed to summon the Demon Lord, vow that they will destroy the Holy Maidens. One of them smiles menacingly and looks at a small chest (not breasts, a box).

Back in town, Luna’s sister announces her arrival, “The second eldest Holy Maiden Killer Queen, has come!”  She has also brought all her men. 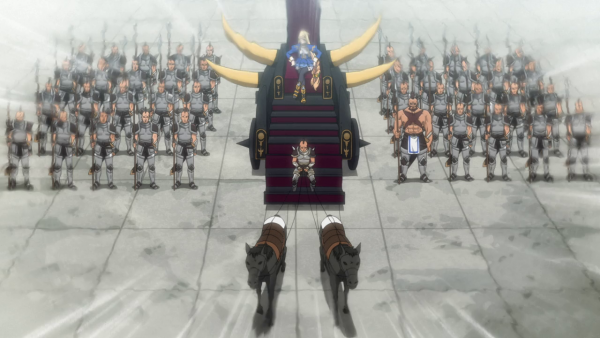 Killer Queen, and her entourage

The deranged lady with the big boobs (it turns out she is actually only 17 years old!) shouts for the Demon Lord to come out.  Hakuto Kunai is watching nearby and refuses.  He looks on as Luna suddenly arrives and is ‘told off’ by he big sister for leaving without informing her.  Seems a little melodramatic and silly but this is only just warming up!  🙂

Luna retorts confidently that not only IS there a Deon Lord but that she managed to charm him with her .. erm ….. charms…  She has a point, the only time we saw the Demon Lord smile (read grimace) was while he was spanking Luna’s young teenage bottom.

Hakuto looks on slightly embarrassed,  At this point, the Satanists arrive and a battle between the Maidens and the Satanists begins.  Haruko notices that the uniforms of the Satanists are the same as those slain at the Wishing Stone.

Things are looking pretty black for the Satanists who are outnumbered and feeble against the might of the Killer Queen, her army and the might of the little girl, Luna.  But then, the head Satanist pulls out his chest (box not pecs) and lets loose a dastardly ‘darkness’ on the pretty maidens and their minions. 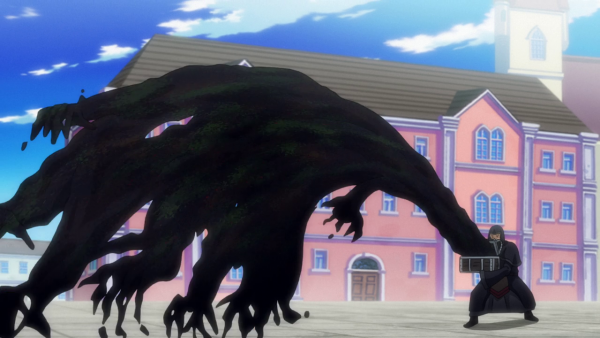 The darkness slithers darkly along the ground and kills lots of soldiers and traps the two girlies.  Then, suddenly, Hakuto’s Demon King Ring starts talking to him.  It’s not a very friendly ring and suggests that it is let loose to kill everyone (all at once).  The ring then seems to disable Hakuro and he falls to the ground unable to move as the Darkness closes in……

He brings up his game console screen and performs a character change which he is ‘Unable to control’.  I have no idea what that means and to be honest, I was just going with the flow at this point.  Hakuro presses the button and presto, some dude in a white dressing gown with a grey dragon on his back appears and asks, “where is this place.” 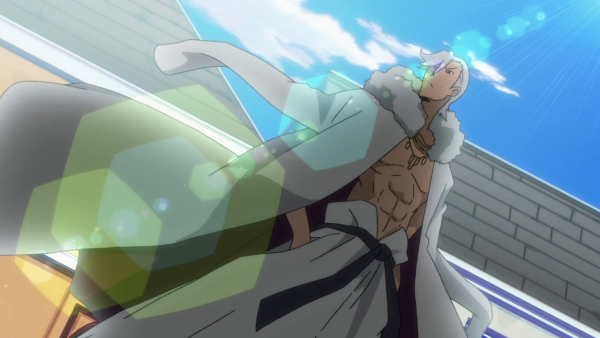 The Killer Queen positively ‘splooshes’ all over the dude. She can’t remember when someone last ‘saved’ her, she is actually lost for words (which seems quite plausible and most of her sentences have the word ‘shit’ in them and that doesn’t tend to lend itself well to flirtatious situations, no really, honest, it doesn’t!)

The Satanists are furious that the white-haired dude has diminished their beloved darkness weapon and they attack him.  He goes into ‘grudge mode’ and easily beats them.

Killer Queen, the Holy Maiden is very impressed and she really likes his cool white outfit too. And, she also likes the feeling of being attracted to the guy.  I guess she hasn’t had many boyfriends.  In the end, all she can say to his is, “erm, would you be so kind as to tell me your name please?”

He tells her that he is called, “Zero, Zero Kirisame”  Frankly he does this in a non-flirty way as if he isn’t bothered. He tells her that that was an insignificant battle that was, in effect, way beneath him.  This time, we almost herd the young killer queenie sploosh!

“Zero? Um,” she says, “I’m sorry for dragging you into all of this….”  She secretly vows that he will be the man of her destiny. 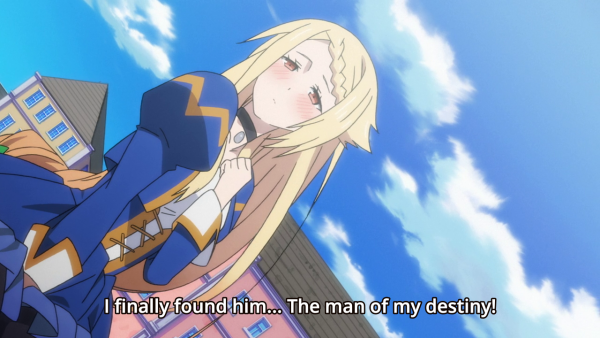 Killer Queen vows that her new boyfriend will be, Zero Kirisame

Meanwhile, as Zero leaves, we see that the head Satanist has managed to recover his ‘Darkness’ which he calls Hades and  he makes his escape muttering, “Those with Dragon Blood on the side of fighting evil, those who look in the ground with disdain, Dragonkin.  Have they have formed a secret union with the Kingdom of light?”

Then we cut to a scene with Hakuto Kunai, the Demon Lord.  It turns out that Zero and Haruko the same character and also that Haruko already knows of him and doesn’t like him at all!

Next, we see two more young ladies, one has a bikini and a cloak with red hair called, Mikan (who is a Greatsword user) and Yukikaze (apparently she is a girlish boy) who is provocatively licking a 6-inch popsicle (no comment, she looks like she is 12).    They seem to be adventurers and looking for work on a noticeboard.  They decide to go and kill some sand wolves for money (I assume quest reward).  They also learn that there is a bounty on the Demon Lord.

The episode closes with Hakuto and Luna arguing in a carriage.  I’m not sure where it is taking them but Luna is confident that Hakuro will act as her bodyguard since he is infatuated with her ass and also because he is a pervert.  Aku loves the banter between both of them and is very happy.

Yes, it ‘s fun but it doesn’t entertain me enough to make me want to watch the rest of the series.  The story is sluggish, the dialogue isn’t much fun and this isn’t made up for with great graphics.  I night have considered continuing the series reviews if there hadn’t been so many good shows this season.

I’d rate this a mediocre 4.3.  I won’t be watching the series anymore except in secret.

This review is © Tony Fawl