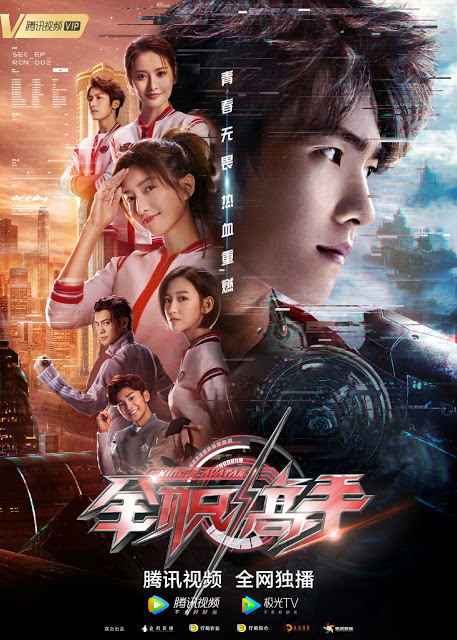 The King’s Avatar (2019) is now out – currently on Tencent in China and and WeTV (where it is available with English subs).  I’m pretty sure other places will be streaming this soon too.  We have detailed reviews of Episode 1 HERE and also Episode 2 HERE.  Both have lots of pictures and a detailed explanation of the story-line.

This is the live version of the hugely successful and popular The Kings Avatar (Quanzhi Goushou).  It tells the story of a professional player in the multiplayer online game called Glory. Ye Xiu (who has a player character called Ye Qui), is well known as the archetypal ‘expert’ and the player-to-beat,  He is mature and easy going but ruthless in the defeat of his in-game opponents.  Due to a series of circumstances he was unceremoniously kicked-out of his guild. He was unable to play using his own name or character and lost all his in-game stuff (mounts, weapons etc,). After leaving the pro gaming scene he now works and lives in an Internet Café employed by one of the owners. When the Glory game manufacturers launch a tenth server, Ye Xiu begins his epic battle to get back to get to the top using only his years of gaming experience, memories of the past, and an unusual self-made weapon (that looks like a collapsed umbrella and his grit and quiet determination.

The anime was an inspirational story of rise to fame and glory and this looks as though it is going to be exactly the same but with a huge budget – even better!

The first 10 episodes are out on WeTV and in China.  Production values are really high and YangYang (lead actor) has already received quite a favourable response from the viewers who have been watching the show.  I’m getting reports (I’m at work on my lunch break) that Yang Yang’s voice has been completely dubbed!!  Not only him apparently but most of the rest of the cast too!  WTF!  Not something that would be generally condoned in the west……  And that sums up what I’ve seen so far…. I can’t work out if this is a fantasy or a drama about game players.

From what I’ve seen of the show so far, it’s fucking awesome!  Nowhere can we get an internet cafe like the Happy Internet Cafe, a guild with it’s own building and lodgings for it’s professional players etc. it seems (from this Brit’s perspective) that this is a fantasy although, it’s what I dreamed the world should be like 20 years ago!  I wanted my gaming to be epic and I wanted the player environment to be lifelike/understandable and fun to be in. I wanted gaming to be so good that the best players would be able to compete and be watch as in a spectator sport!  The Kings’s Avatar is a world with all that and more.  Also, and this is really great, the graphics for the game-play is good and the non-graphics, the actors and show, scenery etc. of the game is really good,  This is a big budget production and it really shows.

I was completely blown away by the Happy Internet cafe, what a wonderful place and boy did I want to hang out there.

As soon as I get home I’ll be reviewing this first episode, I just wanted you to know that the wait has been worth it.  There are lots of differences from the original anime first season, but the live action is pretty fucking good too!

Soooo excited.  Stay tuned for the next update!  I will have screen grabs and details of the episode (it’s 40 minutes long so it will be a bit of a wait), but it will be out in the next few hours, promise!

Done:  The review is HERE  if you want to read it.

As I said in a previous post, if you are new to gaming (a noob) or a hardcore gamer (with no real life!) or a gamer fanboy or fangirl, you need to see the show – the premise of giving life another shot even if it means starting over is an inspiring story and this show tells it well.