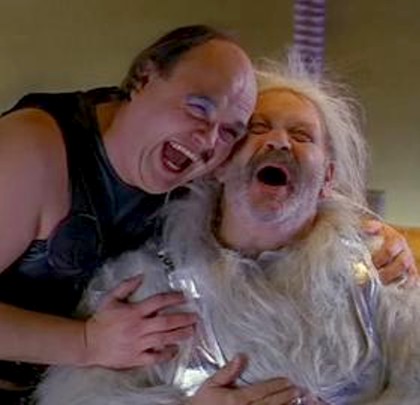 This pair of mercenary bum-buddies, are responsible for the humiliation of Stanley (what isn’t) eight years earlier and later bare the brunt of his revenge in the episode ‘Eating Pattern’. If you were to meet Feppo and Smoor in a pub, you would suddenly realise what kind of pub you were in and leave in haste! (or not depending on your preferences & mood). Feppo tricked Stanley Tweedle when Stanley’s ship was stranded at a Heretic outpost. He was released after a humiliating homosexual encounter with the two villains and played a small but significant part in transporting an enzyme in his tooth to His Shadow. It was presumably placed there by Feppo and Smoor and resulted in Stanley being known throughout the League of 20,000 planets as a traitor. This was a double whammy as far as Stanley was concerned.

Stanley managed to get his revenge on them through contriving to persuade the gullible pair that he was the commander of a powerful ship and just as stupid as he’d always been. Feppo, who had always had a soft spot for Stanley, couldn’t believe his luck.

Feppo and Smoor plotted to persuade Stanley that he was helping a very attractive girl who was stranded in space and running short of air. The valiant Stanley rushed to her rescue only to find that Smoor was the creator of a holographic image of the girl and that the luckless Stanley was again the prisoners of Feppo and Smoor.

They tied him up and played with him for a while before the LEXX swallowed their ship and spat out Feppo and Smoor, depositing them on a little planet where the frightening occupants looked on them as ‘tasty treats’!

Again, Paul Donovan and Lex Gigeroff have hinted (see Splarka’s interview with them) that these characters will appear again in the next series.

Discuss these dudes in the
LEXX Discussion Forums 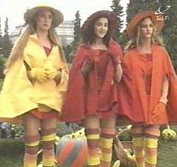 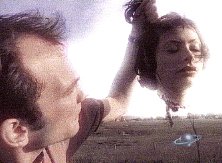 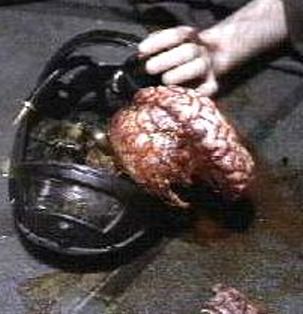