In this week’s episode, Masato, Wise, Porta and his mother head off to a village to battle the Empress of Night. Little do they know that one of them is related to her! 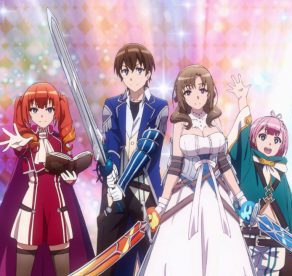 As you know, this is an anime show about a game created by the Government to help young people to better appreciate their mothers.

The game entices young players into a virtual world that traps them in the game with their mother who is usually a player which is overpowered.  I suspect that the objective of the game is to ‘win’ the game with your mother to get back home.

After the review of last weeks episode, I was looking forward to seeing how this would develop and how Wise and Porta would interact with Masato and his mom, Mamako. This week’s show is called, get ready……. “Underwear is Armor.  Make Sure It’s High in Defence.  Otherwise, My Son Might Die!”

It was quite an innocent opening, the team (Masato and his mother Mamako, Wise and Porta were eating a meal made by Mamako.  It wasn’t anything special but Wise was particularly enjoying it.

It was a traditional japanese meal and she was very happy to eat it.  I’m not sure what, Masato wasn’t particularly impressed, I guess he takes his mother’s cooking for granted. 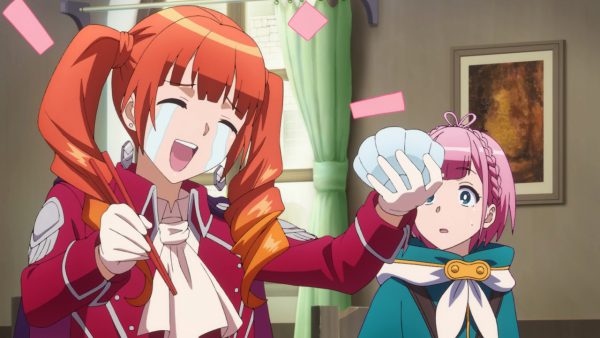 Masato annonces that once they have finished their meal, they should all go and get geared up at the local armory and then they will be heading off to take their next quest.

Mamako is first to try on some gear and although the shop assistant didn’t look much of a pervert, he suggested a very skimpy outfit which Mamako decides is worth a  try.

Masato of course is horrified, The girls looked pretty shocked too.  Mamako seems oblivious to the inappropriateness of the costume, even if it allows her to swing her sword freely without andy folds of fabric getting on the way etc.  Yeah, maybe the shopkeeper has a point! 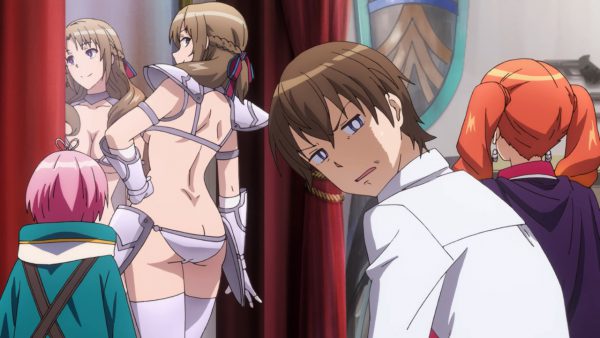 She didn’t actually ask if it made her bum look fat but I bet she thought to ask.  Masato, meanwhile is muttering to himself that a son shouldn’t have to see his mother in a bikini.

He points out that the costume is not particularly appropriate and suggests that she tries something else. 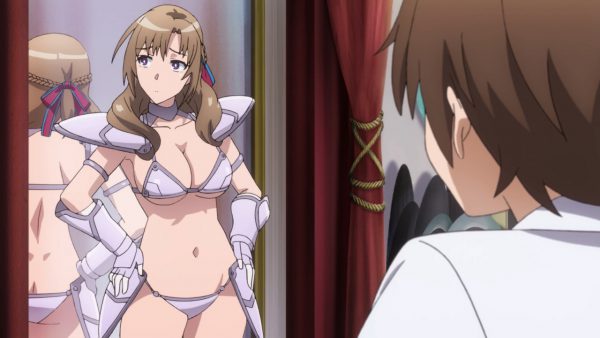 She agrees reluctantly and tries to try on a priest outfit only to find that since her class can’t equip a priest’s outfit, she gets stuck and he son has to help her out of it,

Eventually she tries on a suit of armour that is appropriate and Wise and Masato wait for Porta and Mamako on the outskirts of town.  Masato tells Wise how things aren’t going the way he wants and this always happens when his mother is around. 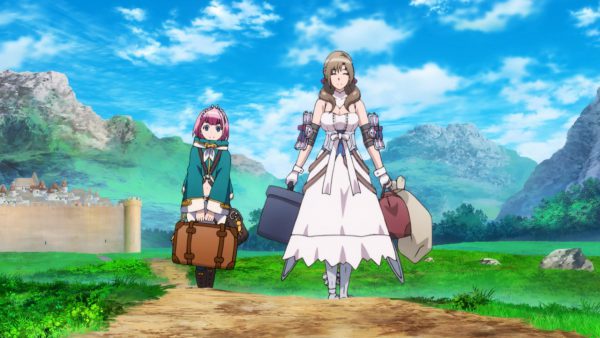 Then we see Mamako (in her new more respectable outfit)  arrive with Porta and they are leiden with bags.  Mamako explains that there were some special offers at the shops so she bought some extra gear for everyone.  Masato gets upset, I’m not sure why, but he starts pointing out that his mother is being over zealous and selfish. Wise jumps to her defence and she tells Masato that he is being weird and mean but Mamako feels bad and apologises. 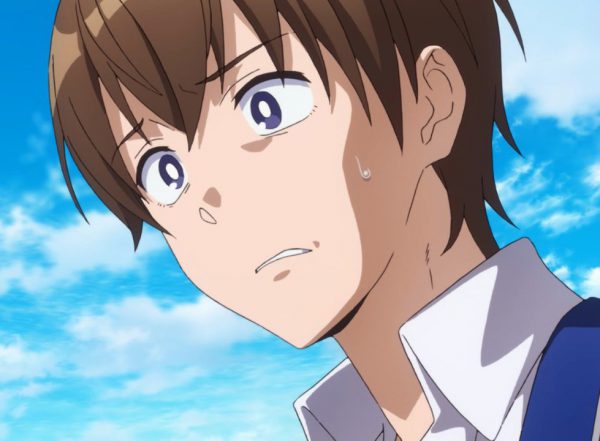 Masato then realises that when things aren’t going quite the way he wants them to he sulks and gets mad at her.  Mamako then suggests that she cleans his ears with cotton buds and this will help them make up.  It’s very weird and although Masato can be a bit mean to hs mum, she’s also a bit bonkers, lets face it!

While he is having his ears cleaned with cotton buds by his mom, he explains that he sometimes says stupid stuff and Mamako glows which signifies I guess that she is happy and that they have made up.  Wise notices and we are led to believe that she is contemplating the relationship between her and her mother.

They continue their journey and eventually get to Maman Village. 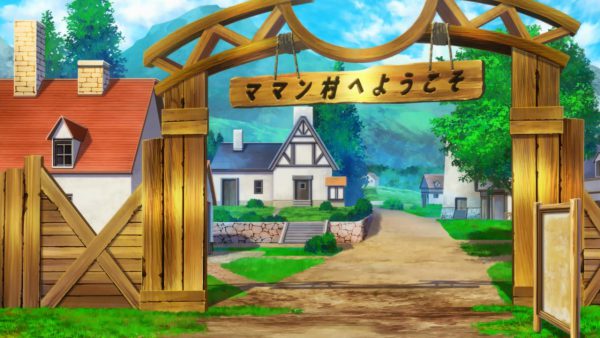 A village elser tells the group that a demon called the Empress of Night appeared in the village and showed he incredibl;e power top them abnd then gave them her demands which were, “If they cvalued their lives, they had to bring the best looking guy in the village, a hot host, one whose pecs and abs she could rub all day and not get tired of them….. as a sacrefice.”

They village elder then went on to say that the sacrifice was to be handed over tonight.  MAsato sheepishly looks aqt him and suggests that he wanted him to be the sacrifice.  The village elder admits that he was going to offer them free food and lodgings until the empress showed up and then offer him as a  sacrifice.  Mamako on the other hand has been very quiet up to this point and has had one of these motherly knowing yest still blank smiles on her face.  Masato agrees and they all go off to a hot spring bath together.  There is the usual silliness of the girls getting in the same bath as Masato and Mamako tries to help Wise relax by rubbing her shoulders and chatting.

Then they begin to discuss the upcoming fight with the Empress of Night.  Nobody has ever heard of her before but suddenly Wise is able to tell them all the information they need. 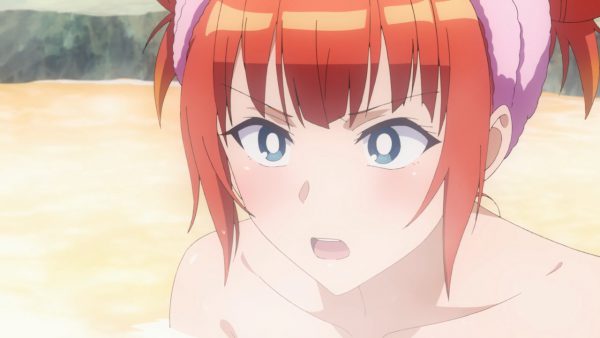 Wise explains that she uses offence, buffs and healing and that she has the cast cancel skill so you can’t interrupt her while she is casting.  She also has invisibility barriers which need three hits in a row in order to gamage her.  She is very difficult to fight,  It turns out that Wise knows the Empress of Night but doesn’t want to tell any one how.  She makes up a couple of pathetic excuses but when Masato challenges her she stands up naked in front of him and talks about how she should be trusted.  When she notices, to her embarrassment, that she is stood naked in front of him, Masato explains to his mother that hsi is about to die for seeing wise naked but not to worry. Wise calls him a pervert and says she isn’t going to kill him because he would like that and storms out of the baths – still stark naked. 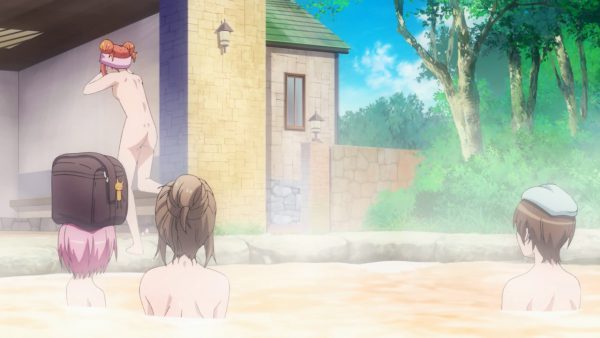 To be honest the whole scene was a bit forced and silly.

Shirase meanwhile, is just outside the village as the Empress arrives.  Some blokes with defined abdomens are being used as a chair to support her and Shirese is unimpressed.  She tells the elevated lady that her character design is flawed and that the admins have had no choice but to remove her access to the service (?!) 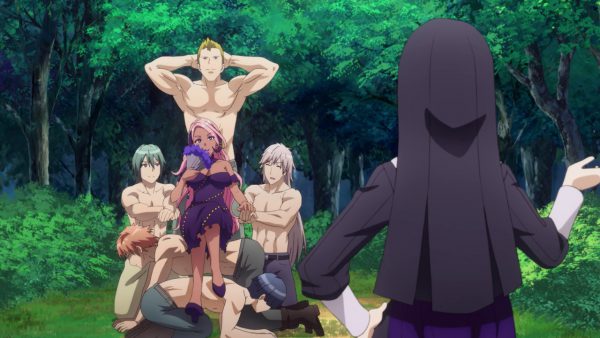 Shirase tried to eradicate her from the system but fails. The Express uses a powerful spell on her to knock her back.  Shirase is about to get hit with another when she informs the Mpress that her daughter is quite close along with the rest of the party.  It seems as we suspected, that The Empress of Night is Wise’s mother!

We learn that Wise’s mother does not appreciate her daughter and in fact she prefers mothering the boys. She thinks they are intelligent and they will do everything she asks, those are the sort of kids she likes.  “What sort of mother treats her children as furniture?” Shirase asks, she has a point. Then the Empress kills Shirase (only in the game of course).

In the village, MAsato is back in his room when Wise calls.  She tries to tells him about her mother but fails.  Eventually, and later, WIse tells them all that the Empress of Night is her mother.  A strange woman that spent most of her money at Host Clubs and that Wise is actually called Genya and named after her mothers favourite host.  Her parents divorced and she decided to live with her father. SHe eventually came back into her daughters life and wanted to make up by playing this game with her.

Unfortunately for Wise, she reverted back to her old self and found that she could have much more fun playing the Empress of Night and building her own harem of hosts.  Wide tells them that the relationship between her and her mother is over.  Mamako disagrees though and explains. 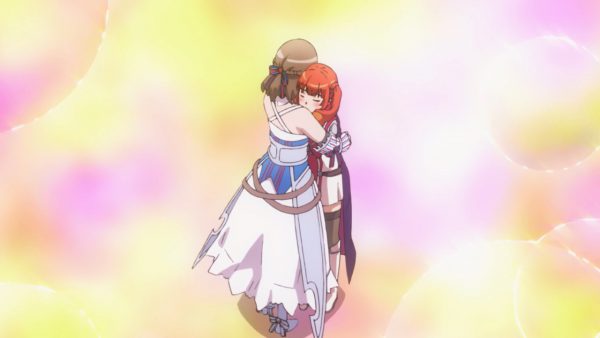 Mamako gives Wise a hug to help her remember her mother

Masato and the rest of the team determine that they should make the Empress remember the bonds between mother and daughter.

In the woods however, The Empress is thinking that she will soon be receiving another host/son and that she will turn him into a table and rub his abs while she drinks wine.  She considers that he daughter may mess things up but she isn’t dettered.

And there the show ends. Lots of relatively tame fanservice and not much story.  The show wasn’t quite as good as last week and it isn’t a show that I’ll continue reviewing – lets face it, there isn’t much point as this is one of the most predictable stories of this anime season. And as it is, you are probably more interested in the pictures in this review than the words (I know I am  🙂 ).  I’ll probably still continue to watch the series on and off for fun though.

Did you know you can rate this episode yourself, you don’t even need to register! Just select the User tab in the Review block above and click the stars to set your ratings!

This review is copyright Tony Fawl, not for reproduction without the author’s permission.

Do You Love Your Mom and Her Two-Hit Multi-Target Attacks? or Okaa-san Online is directed by Yoshiaki Iwasaki. The characters, story, pictures and design for this show are the property of J.C.Staff, KADOKAWA, Tokyo MX, KLab and BS11 and of course Crunchyroll.  All rights reserved.