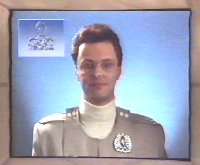 Lister is sat watching a boxing match on the monitor. A boxing match, I might add between topless women who don’t actually seems to punch each other, but do tend to jump up and down a lot. Kryten brings Lister’s breakfast and when he asks if any of the female contestants are expected to win, Lister simply replies, “I’m just hoping it goes the distance.”

He manages to take his eyes off the screen long enough to point out to Kryten, that he is his own man! (or robot) and doesn’t need to keep serving Lister or indeed, any of the crew. Kryten acknowledges the comment and promptly throws the delicious breakfast in the bin. He then mentions that a ‘homeing pod’ arrived and there was one item of interest. It related to Kryten.

This was a great scene. The communication came in the form of a video chip. A person appeared on the video screen saying that the ‘old’ series three Mechanoid was nearing the end of it’s useful life and that the owner couldn’t help notice how stupid and amazingly ugly it is. (this was great. The geezer playing the character on screen is the same one who plays Kryten). The announcer then goes on to tell Lister that the ‘droid will be turned off (automatically) in 24 hours time and that he/it should use that time to pack itself away in it’s original supply case. Kryten excuses himself and leaves. Lister is shocked and worried by this news.

Lister joins Kryten (as he packs his spare heads away) and comments that he shouldn’t take this ending so lightly.  Kryten is quite sanguine about his imminent death. He tells Lister that the only problem is that as his adopted one, Lister has to die with him. Kryten was of course in-joke ‘dead pan’ mode. He tells Lister that at 7am in the morning, his shutdown disk will be activated and all mental and physical activity will stop. “What will happen then?” asks Lister.

“I don’t know,” replies Kryten,”  Perhaps I’ll get a job as a disk-jockey.” (so that’s where Chris Moyles of BBC Radio one started) He does however, believe that he will soon be going to Silicone Heaven, a place where the souls of all electrical equipment congregate.

Lister points out that this is ‘Whacko Jacko’ and that there is no such thing as Silicone Heaven. “But where do all the calculators go?” asks Kryten. “Surly you believe that god is in all things, aren’t you a pantheist.”
“Yeah,” says Lister, “but I just don’t think it applies to kitchen utensils, I’m not a frying pantheist!” he adds that calculators and other machines don’t have an afterlife.
“But of course they do!” Objects Kryten, “…. It’s common sense sir, if there wasn’t an afterlife to look forward to, why on earth would machines spend the whole of their lives servicing humankind? Now that would be really dumb!” Lister decides to agree. He doesn’t want to spoil Kryten’s picture of going to heaven on his last day. He asks Kryten, just out of interest, if Silicone Heaven is the same place as human heaven. Kryten laughs, “there is no such thing as human heaven.” He says, “Someone just made that up to prevent you from all going nuts!”

Later, in his quarters, Lister tells Rimmer of Kryten’s impending doom. Rimmer is not as upset, “At least he gets 24 hours notice. All most of us get is Mind that bus, what bus, splat!…. Maybe I should talk to him, maybe he needs a little bit of counselling!”

Lister looks at him in disbelief. He remembers that Rimmer once worked for the Samaritans. “You spoke to five people and they all committed suicide! I wouldn’t mind but one was a wrong number. All he only phoned up for was the cricket scores!”

Lister theorises that it might be possible to disable Kryten’s shutdown disk. Rimmer is not so sure. Kryten isn’t like the toy robot of Marilyn Monroe that Peterson bought on Calysto.  Lister reluctantly resigns himself to Kryten’s impending doom but resolves that they should make his final night one to remember. He rushes off to find Peterson’s Marilyn Monroe droid. He is joined later by Cat. Cat is arranging the catering and gives Kryten an invitation to a party at the officers club.

That night a formal dress party is arranged for Kryten. He arrives in his tucked and is pleased to see the crew gathered round the party table. Even the gorgeous Holly is there wearing a very nice tiara. Kryten settles down and is given a drink, which is concocted from a special recipe, developed by the considerate Holly. Kryten takes a sip and is quite pleased with the effect. Normal alcohol does not effect him, but Holly’s concoction is very strong and should produce the same effect. Lister also wants a sip.

“No, no,” she says, “don’t do that. It’s lethal to humans. Well it’s probably lethal to androids too for that matter, but I didn’t think it mattered since tomorrow yer gonna be… erm..!” A look of horror passes over her face.

Rimmer recovers the situation quickly by pointing out the menu. Kryten doesn’t eat, but again Holly ‘knocked’ up something which would excite his taste buds. Cat is impatient to give him the presents. one of these is the Mechanoid Marilyn that Lister built. He presses a button on what looks like a tv remote control. The remote explodes but it does command the kit droid to enter the room. It has to be said that this droid was particularly ugly.

Kryten however was most surprised, “It’s Marilyn Monroe!” he said. The droid then went a little haywire and walked through a wall. The dudes party on. Much later everyone even Holly is drunk.

Next morning everyone is hung over except Cat. I don’t know if it’s that Cat is immune to drink or if it’s because it’s uncool to drink. Even Holly has a hangover. She is wearing an ice pack on her head. Kryten gradually tells the recovering crewmembers that it is his replacement that is the problem! He himself can override his down chip. The problem his replacement which ill shortly be arriving. If the replacement sees that Kryten is still active he will attempt to destroy him. The crowd rally round their android friend and Kryten is encouraged by this. The previous evening was the first time he has felt pleasure and he does not want to die. He is very pleased by his friends wanting to help, “You would gamble your safety for a mere android, is this the human value you call friendship!?”

“Spare me the Star Trek crap will you Kryten, it’s too early in the morning.” Says Lister (Wadda GREAT Line!)  Holly tentatively informs the crew that Kryten’s replacement has arrived.  The guys tool up and ship out to the Gantry Deck to await the arrival of the new ‘Hudson Series three’. Hudson arrives, all seven feet of him. He speaks with a very gravely voice and, dressed in black and rather sever makeup, looks considerably less friendly that Kryten. He refuses to leave and becomes pre-occupied with the termination of Kryten. The other three try to stop Hudson, but they fail. It is left to Kryten to face the final confrontation on his own. Hudson grabs Kryten’s neck and lifts him up, “prepare for Silicone Heaven.” It says.
“..It doesn’t exist!” says a choking Kryten.

Hudson looks surprised and releases his grip slightly. “No such place as silicone Heaven….. then where do all the calculators go?” Hudson overloads with this news and dies of a ‘metaphysical dichotomy’ (rather ineffectually really).

The rest of the crew gather themselves together and Lister asks why Kryten’s circuits can handle the ‘no Silicone Heaven’ statement where Hudson’s couldn’t. Kryten answers that it was because he was lying. “No Silicone Heaven! Preposterous! Why, where would all the calculators go?”

And the final episode of season 3 ended. By this time most of us were confirmed Red Dwarf addicts – and deservedly so! 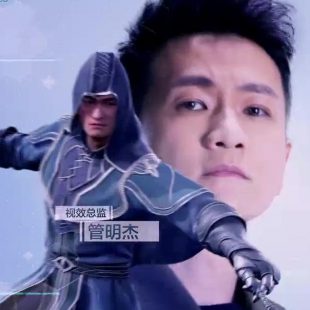 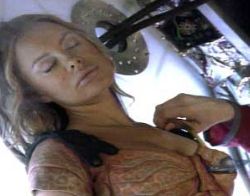 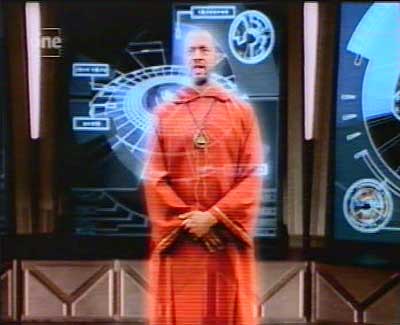