The one liners in this episode were among the best ever!  The show opens with a medical examination on Starbug.  Kryten has examined Rimmer and the results show that the light drive has taken on the physical disabilities and ailments that Rimmer suffered before he died.  Kryten tells Rimmer in a rather roundabout way that he is very ill. Indeed, that it is possible in certain rare circumstances for a hologram to die!

“Kryten, Kindly get to the point before I ram your nose between your cheeks and make it the filling of a buttock sandwich.” Says an impatient Rimmer.

Kryten worriedly continues and explains that Rimmer is prone to distress-related disorders and that, “…. your activities over the last couple of years have pushed your brain, frankly, beyond breaking point!”

Rimmer is mortified! (Well almost) “Your ‘t’ count which is the hologrammatic equivalent of blood pressure is higher than a hippie on the third day of an open air festival!” Continues Kryten. He tells Rimmer that it is imperative that he start a programme of relaxation

Rimmer is non too impressed with Kryten’s frankness and tells Kryten that he has, “… the bedside manner of an abattoir giblet cutter!” He accepts a pair of Chinese worry balls to help him relax.

Meanwhile Lister and Cat have found the wreck of the Simulant ship that they encountered a few weeks ago.  Lister supposes that there are supplies on board (supplies which are vitally needed). Rimmer is worried that there may still be Simulants on board, but Cat explains, “There’s an old Cat saying. If you are gonna eat Tuna, expect bones.”

Rimmer adds, “There’s an old human saying. If you are going to talk garbage, expect pain!”

Rimmer is unperturbed, he likens the boarding of the Simulant ship to, “Flopping your wedding tackle into a lions mouth and flicking its love spuds with a wet towel!” His argument fails to sway Lister. Rimmer continues to try by asking why a Simulant ship should have food supplies on board!?

Kryten explains that Simulants are notorious for having large supplies of food on board to prolong the agony of their torture victims.  In some cases they have been know to keep their victims alive in a state of perpetual agony for as long as 40 years!  Lister can’t bare another meal made of Lichens and other tasteless foods and decides that they go ahead!

Rimmer makes one last attempt to stop Lister.  He sites that Lister is a lunatic for endangering the lives of the crew on such a mission and sites Space Corps Directive 196156.

Kryten looks puzzled, “196156? Any officer caught sniffing the exercise bicycle of the women’s gym will be discharged without trial! Hmmm. I’m sorry sir, but that doesn’t quite get to the nub of the matter for me.”

Lister explains that it is required that they board the ship because since the fuel supplies are depleted. They only have a few days supply left!

This sends Rimmer over the edge! He keels over and takes out his Chinese Worry Balls. Kryten tells him, “Grind those balls sir, grind them!”

Lister confirms that this is indeed the situation they are faced with. “After you with the worry balls sir.” Says Kryten to Rimmer.

On board the Simulant ship the find that they are not able to fire their bazookoids since any sound may set off the disintegration of the ship. “Why are you all looking at me like that?…. ” Says Lister, “…Like I’m a nostril hair in a Spanish Omelet!”

They find some supplies and a teleporter. They manage to get lots of supplies, but unfortunately, they manage to run across one of the Simulants, actually they run into that tall dark sexy one (she can run into me anytime!). “Well, if it isn’t my old friends…. the human vermin.” Says the sexy Simulant with rather attractive husky voice, “…. The slime, the puss-sucking putrefied walking sesspits of unspeakableness.”

“She remembers us.” Says Cat, surprised. She is intent on killing them, they try to talk her out of it while trying to encourage a hidden Rimmer to blast her with the bazookoid. Rimmer chickens out and makes a run for the only escape pod.  The noise of the escape pod leaving causes a ship quake and the Simulant dies, crushed under some debris, while Lister, Cat and Kryten use the teleporter to escape back to Starbug.

When they arrive they manage to receive a signal from Rimmer who is in transit to the nearest air-breathing planet. Unfortunately for Rimmer, he is unable to be recovered for a few days. His despair is compounded further when he finds that due to a time warp anomaly that Rimmer is about to encounter, he will only be recovered in 600 hundred years. It will only take Starbug three days.

Rimmer is a little more than upset, but he does have some terra-forming equipment on board the pod.  He is able to re-generate the planets surface and make it lush and habitable.  He is also able to re-produce – a woman!  Actually, he isn’t.  He can only manage to re-create versions of himself.  He keeps trying.

600 years later, Lister, Kryten and Cat land on the planet and search for Rimmer.  They are amazed to find a number of Rimmers dressed as Roman Centurions.  The Rimmers capture the crew stating that the ‘intruders’ are hideously deformed.  They take them to their leader. The Great one speaks while two attractively dress women kneel by his side, their faces hidden with veils. “These deformed monsters are no sight for my concubines. My treasures of pulchritude, run along.” The women get up to leave and one turns to kiss The Great one. She lifts her veil and we see that she has a face exactly the same as Rimmer’s!  The Great one (Rimmer) kisses the Concubine Rimmer to the grimaces of the Lister, Cat and Kryten.

They are sentenced to death at dawn and thrown into a cell.

There they find the real Rimmer, his Chinese worry balls are worn down to a small ball barings!  He tells them that his creations overthrew him after only a few years.  He had spent 557 years in a cell.

They use the teleporter to get back to Starbug and the show ends.

“Rimmerworld” episode review is © 1999 Tony Fawl.
Not for reproduction without  the authors express permission 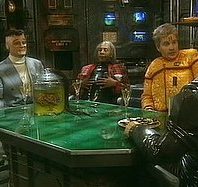 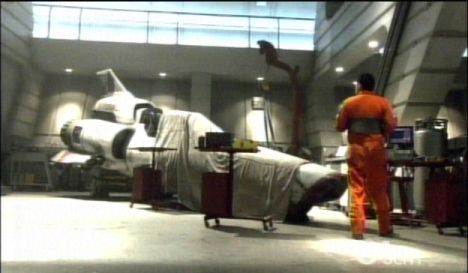 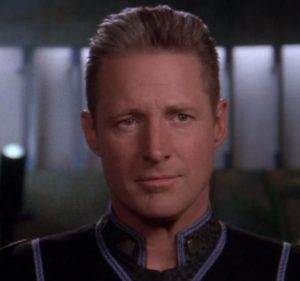