Bem, Bella and Belo need to fight a modified human to stop him killing young women. Sonia begins to realise that Bem and his friends may not be evil

Now that the introductions for the three main protagonists is over (there are three by the way, Bem (the sort of leader or oldest looking), Bella (a female demon who also goes to school in her Humanoid form) and Belo (a younger looking demon who as the appearance of a early teen/adolescent) – he is the most sceptical and cynical of the three.  In case you forgot, they are yokai (described in the subtitles as monstrosities) that believe if they continue to protect the human race, they will eventually be rewarded with becoming human.

This episode was delayed because of the Kyoto Animation Arson Tragedy in Japan.

If you need to see recaps of the previous episodes, Episode 1 called ‘Water’ is reviewed HERE, Episode 2 called ‘Liar’ is reviewed HERE and the Third Episode called ‘Shadow’ is reviewed HERE.   Although the series seems to have great characterisation, the actual animated characters look amateurish and silly.  It’s as though they were drawn by children.  Perhaps that’s a design thing an/or an attempt to keep the design as close to the original 1960’s look and feel as possible. – It looks very cheap though and is a definite annoyance for many viewers.

This weeks episode is called Lightning and it was delayed because some of the content needed to be changed following the Kyoto Animation arson tragedy.  I’m not sure why, but I can guess that it was because the Lightening theme may have been more fire orientated and this would have been unsuitable immediately following what was, Japans worst fire tragedy for many years.

The episode opens with Sonia Summers and her police partner, Joel at a crime scene where a young woman has been electrocuted and killed. This has happened more than once and the police, as you would expect, are concerned. 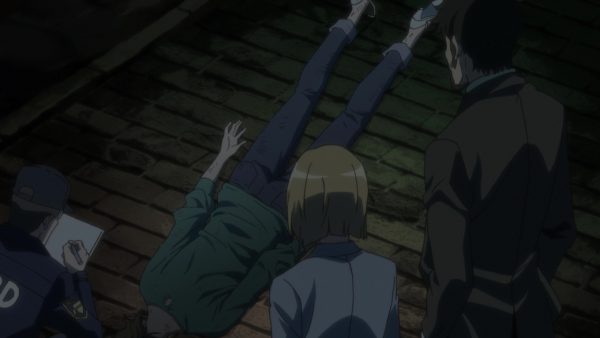 They notice that the murderer always leaves behind a message, an unusual message that they can’t quite understand: 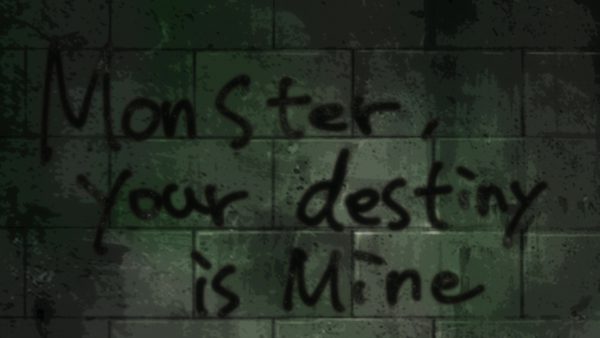 You’d think that the murderer would at least admit that they were a monster, but no.  It seems that the murderer is after a particular monster and that he/she/it is antagonising him/her/it/them.  Joel is suddenly informed that yet another death with a similar MO has happened a few blocks away.  Then the show plays it’s excellent theme opening (by Soil & Pimp Sessions).

After the opening credits, Bem walks past Belo who is playing a game on his mobile phone.  Belo acknowledges that there have been two murders by a ‘strange’ person and Bem wonders if the message was meant for them.  Belo doesn’t care, after last weeks episode, he isn’t interested in humans anymore. Just as Bem leaves, Belo’s three young friends appear.  They are pleased to see him but he just walks off.  They wonder if someone has beaten him in-game (they can’t really understand why he is behaving in such an unfriendly way).

Next we are taken to a seedy dimly lit bar with a number of unsavory but very interesting characters.  It seems that this is a bar for villains and in the ‘hot seat’ is a character playing with lightening. 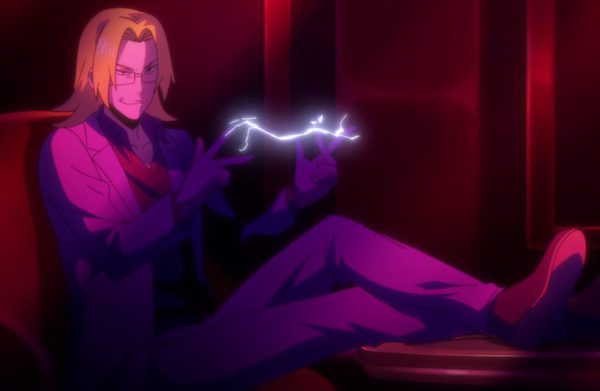 Lightening Murderous Dude – He has a bad attitude and likes to play with fire ….and peoples tempers

The other members of the bar don’t particularly like the dude and he is being gradually wound-up by an attractive lady at the bar who is picking away at him regarding the deaths of the two women. 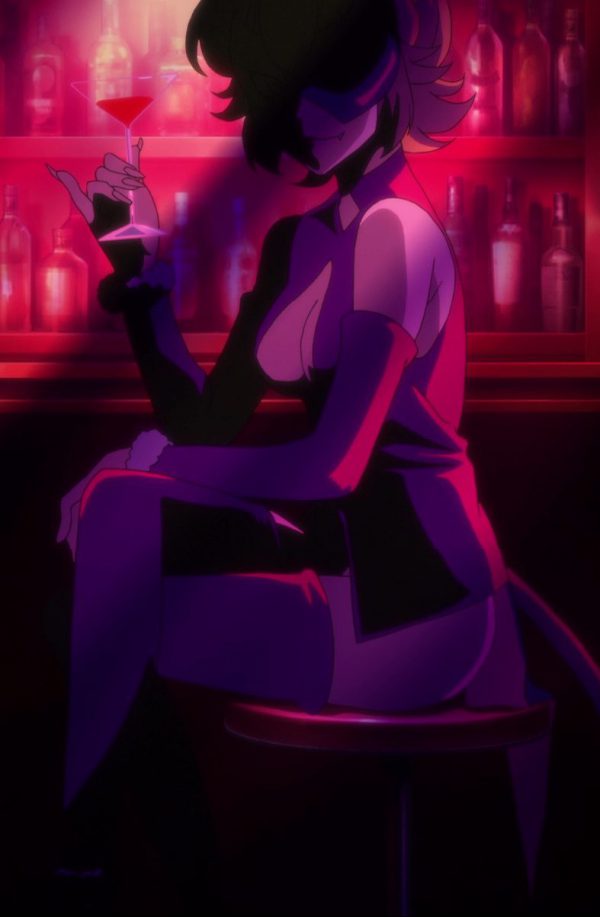 One of the other villains, a bruiser with bolts through his knuckles is annoyed that Mr Shock (as he’s referred to in the bar), seems to be attacking women only.  Other members of the bar are also angry, particularly a strange looking bloke with a fish bowl on his head.  The Fish Bowl villain gets up and accuses Mr. Shock of having a bad attitude (you godda laugh, the guy with a fishbowl on his head certainly has nerve!) 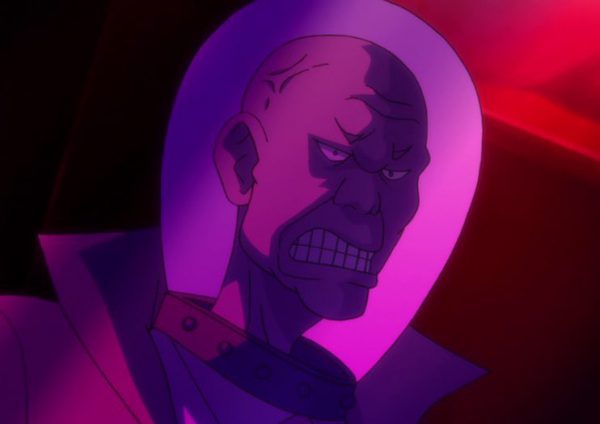 The Villain with a Fish Bowl Head

Mr. Shock on the other hand, disagrees, and in a shocking turn of events, electrocutes the Fish Bowl Villain bloke (and presumably kills him).  This whole thing reminded me of an episode of the Tick cartoon series, I half expected Chair-face Chippendale to pop out from behind the bar. 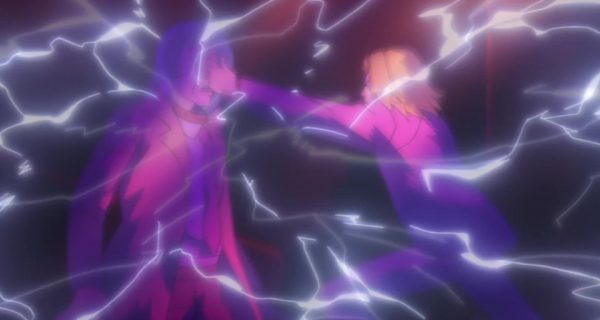 Some of the villains don’t like each other (what’s up with the horrible graphics!)

Back at Bella’s School

Then we are taken to Bella’s college/school, where we see the creepy dude (he’s not creepy I think, he’s probably just shy) gleefully checking out the gory details of the women that have been murdered by electric shock (ok, maybe he is creepy).  The article is marvelously written (seriously, the BBC could learn a lot from this article!!) 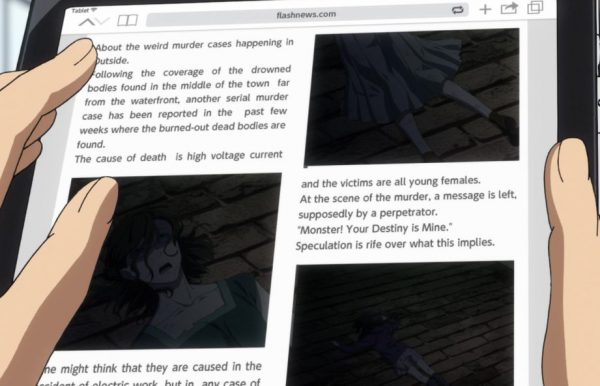 A great article about the murders by Mr. Shock

This is noticed by a few of Bella’s friends.  They talk about how he is on a website that is creepy (jeez, everything is creepy to these girls!).  Apparently it has detailed articles and comment on the gruesome murders of women that have been happening (erm… ok creepy).

Bella meets up with the creepy boy in the alleyway after school (don’t try this at home folks!) and when she approaches her about the articles on the website, he gets all excited and gives her a summary of what the articles are about.  In particular, he tells her that the Internet believes that ‘modded humans’ or super-humans that are behind the attacks.  He then warns her to stay away from the Outside as ‘girls’ are being targeted. (Aww sweet!) 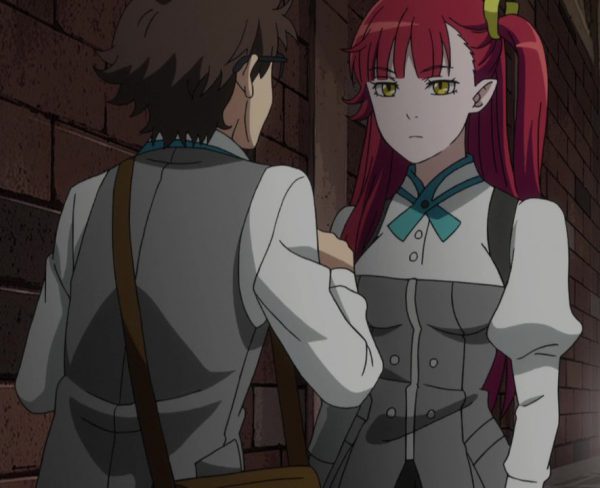 Bela meets the creepy boy in the alley for a chat

Sonia Summers Tells it as it is

Sonia Summers and her police partner, Joel are discussing the details of the recent electrocution murders with their police chief.  She describes the detail of how the victims die and also that the last serial killer was a monster that was killed by electric shock – by another monster disguised as a human.  She points out that this was written in her report and asked if it had been submitted for consideration outside the department. 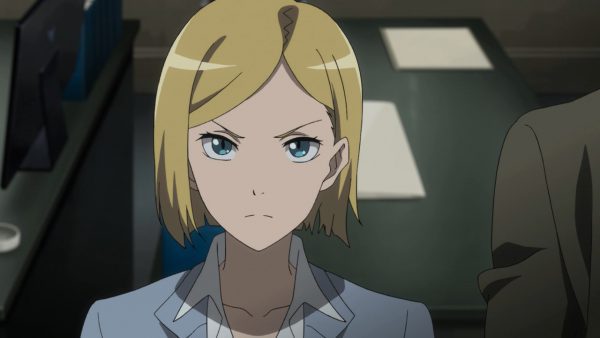 The police chief tells her that the report was held back because of the ludicrous statements that monsters were disguising themselves as humans.  He said that if the report was submitted, they (the precinct) would be a laughingstock.

Joel tries to calm Sonia Summers who is quite agitated.   The Police Chief points out that each of the electrified victims have been found with a powder near  them that is made up of human skin and starch.

BEM visits a seedy friend and catches up to Mr Shock

BEM is also investigating the murders and asks one of his old pals (someone who used to get false ID’s for him) if he knows of anyone capable to being able to produce electric shocks (enough to kill someone), or modify someone to be able to do that.  The seedy dude tells Bem that there was a sort of mad professor that is able to do that sort of things.  He is completely bonkers, but might be worthy of consideration.

Then we see Mr Shock talking to a young woman.  He gives her some silly banter about fluttering hearts and then kisses her forcibly

At the same time he electrocutes her and leaves the ‘Monster, your destiny is mine’ message.

Unfortunately, Bem catches up to him too late and they fight but Mr Shock runs off and witnesses only notice Bem near the scene.  Bem continues his search for the mad professor.

Mr Shock goes for a re-charge

Mr Shock has, by this time, already returned to the mad professors residence to get an electrical recharge.  Apparently he needs this before he is able to go out and electrocute someone – or maybe because he has drained his power after a kill.  Mr shock mentions that he has met a monster that can change shape to human form and asked if it was, perhaps, the Professors work. 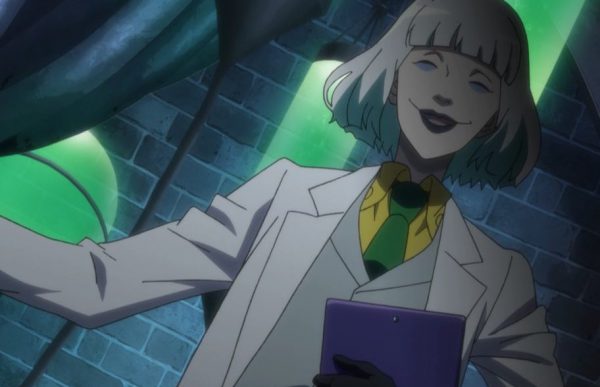 The Professor tells him that it was not.  Indeed, it was probably a Yokai (a monstrosity).

While Sonia is walking the streets alone in the hope of catching up with Mr Shock.  Bem ties to set a trap of his own.  Just as Sonia finds the villain, Mr. Shock, there is a huge burst of electricity that flies up into the night sky and Mr Shock heads straight for it.  He is now keen to put an end to Bem since he has learned that Bem is not a ‘product’ of the Professor. Mr Shock runs off to get to Bem and Sonia follows.

Mr Shock and Bem battle and Bem takes on his monster form.  Also, they are joined by a dimwitted villain called Starch – he literally turns into starch powder and runs around looking like an old befuddled snow-man. 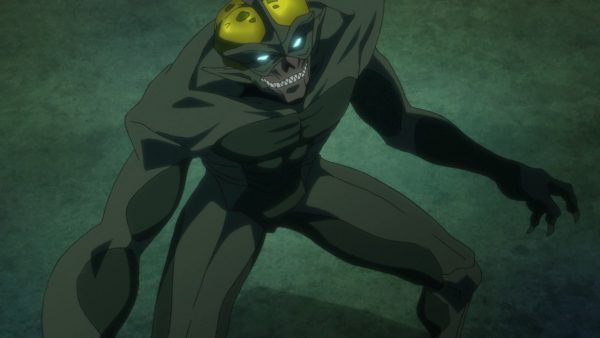 Mt Starch keeps getting in the way of the fighting but there are still two of them to only one Bem.  Sonia then shows up and this begins to complicate things for Bem who must now protect her.

Lucky for Bem,Bella and Belo show up and Belo works out that Mr Shock has a modification in his back that makes him able to conduct and use electric power.  Below disabled the device, Bella freezes Mr. Shock in one place and Bem electrocutes him to death. 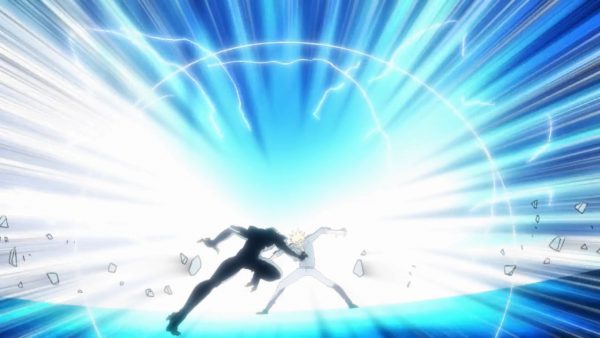 The resulting explosion knocks Sonia out but when she awakens, she remembers that the three Yokai, tried to help her.

Then a lot of stuff seemed to happen.  Firstly, we see a little more of the lady and the mysterious board members who are looking into the affairs of Bem, Bella and Belo. 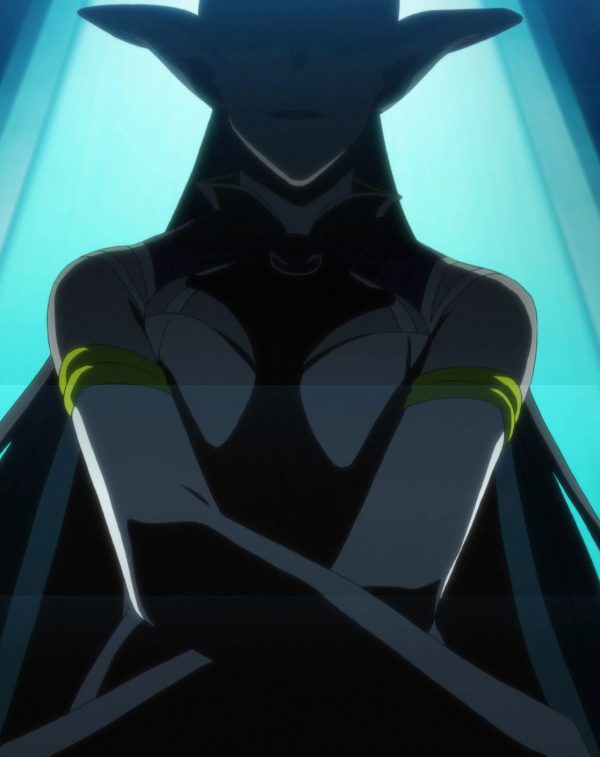 Mysterious Big Eared Lady Chairman of the Board

They are interested in the fact that these three are now being referred to as yokai or monstrosities.  The lady herself has very big ears and may be a monstrocity herself!

Elsewhere, the hapless Mr Starch materialises in a back-alley and is annoyed and upset that he is hurt after the huge electric shock that killed Mr Shock.  Suddenly a huge vacuum cleaner sucks him up and he is no more.  A creepy voice then says. “All cleaned up.” That might have been the mad professor but we didn’t find out.

And there the show ends.  Pretty good but also a little disjointed and hard to follow.  I know that can be a good thing too but I’ve seen the board members in each episode and we still don’t know what they are about and its a little irritating.  Sonia and he partner dont seem to have a role in the story yet and that seems a little strange.

I’m still loving the show and rate this 8.5 out of 10! Let down again only by production (in particular the poor secondary character and monster drawing). What did you think?  Rate this episode yourself, just click the ‘Users’ tab in the review block on the top right of this page and click the stars to rate.

Discuss this in the Bem Thread in the Anime Forum.

The characters, pictures, story and everything else associated in this Bem Episode 4 Review is copyright  Production I.G and LandQ studios and Crunchyroll.  All rights reserved.