I noticed that the graphics weren’t as sharp as last week, not the blur, I just would have expected more detail. Story, characterization, and dialogue were wonderfully written and held my attention throughout. 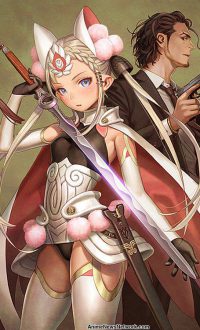 Just so you know, you can vote too!  Select users tab above the review block and rate the epsiode yourself.

This review is prompted from the news article ‘wishlist of anime for the Summer Season of 2019‘. Episode 1 was also reviewed HERE.

So, I was nervous that the first episode was too good and that the second would be a bit hum-drum.  I was wrong, this episode (story-wise at least) was much better than the previous. I really am enjoying the cool writing and in particular the dialogue between the main characters.

The plot is also drawing me in with a steady stream of characters and situations. It’s still grown up and still hasn’t resorted to fanservice stuff to keep us interested (although a little more would be good).

The episode is called Dragnet Mirage and it opened with the conclusion of the cliff-hanger at the end of the last episode when our heroes, Kei and Tiliarna are trapped behind a sofa as a baddie empties his automatic weapon into it. 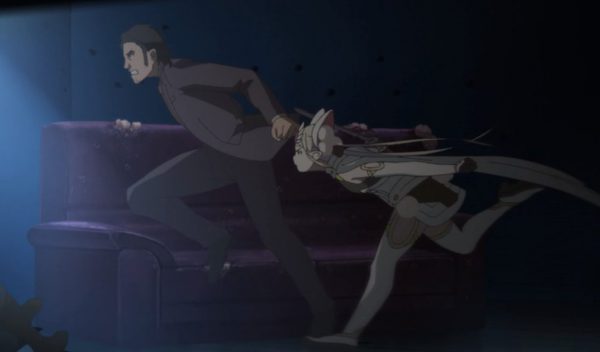 Tilarna and Kei chase the baddie

It’s Tilarna who gets the dude in the end.  She slashes him with her katana and he stops moving.  They each accuse the other of getting in the way and Kei is annoyed that she didn’t allow them to question him before killing him but Tilarna points out that he was under the influence of ‘milday’ and devoured by the evil latena – he was already dead. Kei doesn’t accept this and even suggests that she is working on some secret mission for her government to hide the truth and mess up the case. Tilarna draws her sword and the banter continues.  She is very annoyed and he pushes just enough to determine that she is telling the truth, he had his gun pointed at her the whole time too.  A very tense and gripping argument! 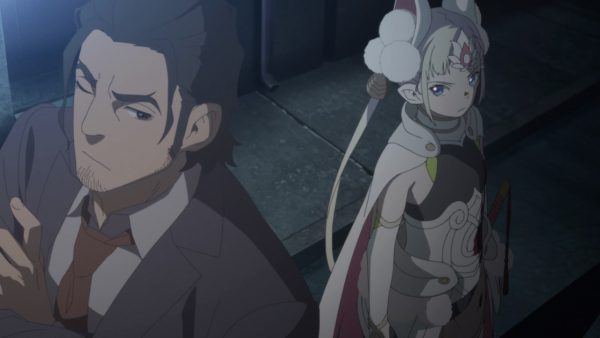 Tilarna and Kei argue about milday

They both visit the mortuary where Cecil (apparently an ex-girlfriend of Kei) is examining the person who killed his partner and the person they were just attacked by.  She confirms Tilarna’s hypothesis that both were under the influence of milday.  She sniffs the corpses and confirms the presence of latena by the smell. 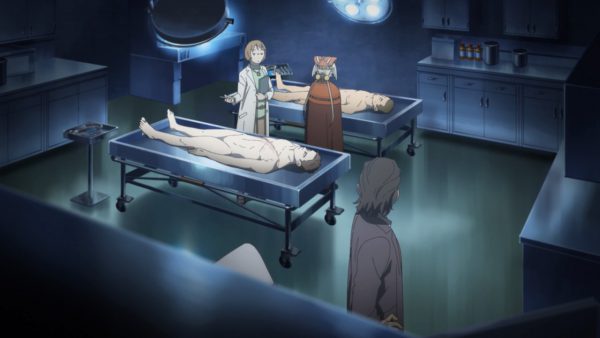 Tilarna is vindicated – the baddie was dead already!

To be more specific, milday is a kind of fairy magic and some people from Semani (including Tilana) are able to use some.  But it is very bad to take such magic from a fairy.  It seems that this is a serious crime where Tilana comes from. They leave and report to Kei’s superior officer.  His boss believes that the person that the baddie had killed was either being watched or that there was a leak at the police station.  Kei tells the boss that he will limit his reports from now on.  He drops Tilarna off at her hotel. 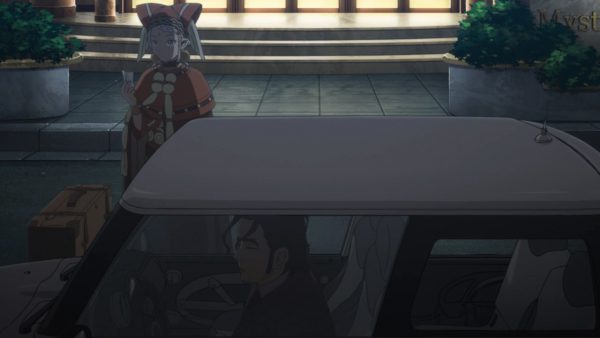 Kei drops of Tilarna at her hotel

Alas, Tilarna isn’t allowed to keep her weapon with her in her room and when she refuses to hand it over to the receptionist, she is thrown out.  Kei isn’t really bothered when she rings him up, but he feels guilty and takes her back to his apartment when she meets his cat.

Kei is allergic to cats but since he put his owner behind bars, he decided to keep the cat until another owner could be found. Tilarna thinks that it’s hilarious.  He puts Tilarna up on the sofa and retires.  She says goodnight corrupting his name yet again and when Kei checks the translation service on his phone, he finds that Tilarna though the cat situation was funny because she had nicknamed him ‘cat’, the word in her language (Kae Imatoeba) sounds similar to Kei’s name. 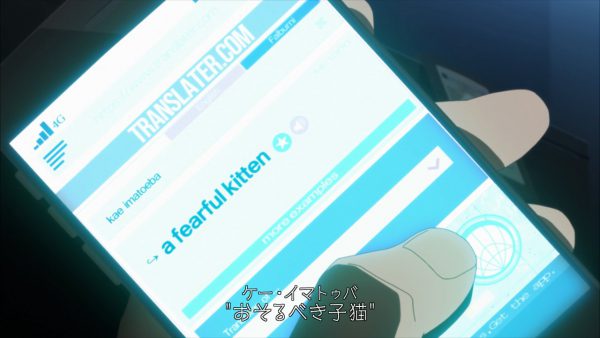 She sincerely thanks him for putting her up as she was feeling a little lonely (she called his name out properly this time). 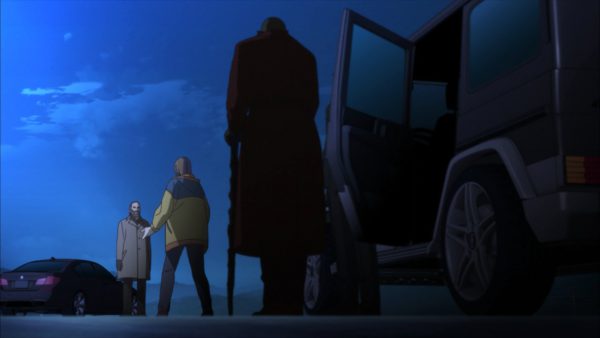 We are then introduced to one of Mr. Elbaji’s men, Zerlada the Sage.  This is the dastardly villain that can enslave corpses with the magical fairy stuff, milday. Elbaji has a further proposition, a special bomb that can be used to kill and zombify at the same time! This despicable weapon is soon demonstrated when a pair of police officers arrive. They had been called to the scene under false pretenses by Elbaji. 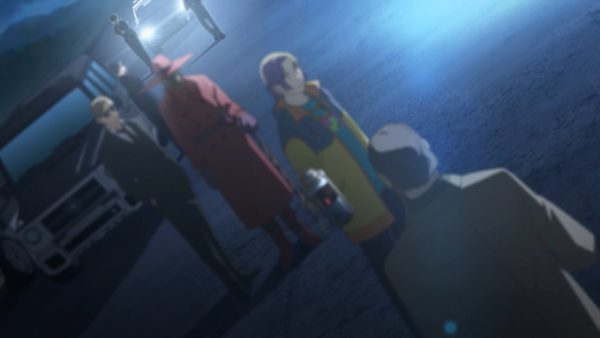 The doomed policemen arrive on the scene

The bomb is thrown and the police officers are immediately killed and turned, effectively, into slaves.  One of the hapless officers is instructed to shoot the other which he does immediately.  The second is told to dance on the police patrol car until he is told to shoot himself. Kareem agrees to pay (presumably any amount) for the bomb.  He intends to use it for terrorist purposes but we aren’t sure precisely what.

The next day, it’s the funeral of Kei’s ex-partner, Rick.  There is a ceremony and harsh words between Rick’s wife and Kei (we don’t hear them but Kei was a real git about the whole notification of his friend’s death so we can guess how pissed of his wife was). Later after the service, he talks with his boss and they discuss that the death of Rick didn’t happen in isolation and that the police force is suffering poor moral because of it.

When he gets back in the car Tilarna asks if he is ok and how long he had known Rick. And Tilarna tried to comfort Kei by suggesting that Rick is probably in a better place. Then Kei gets a phone call to inform him that two police officers have been found dead, the same two we saw in the car park.  Their bodies, however, have been dumped in their car which was in the river.  Kei and Tilarna go to investigate. 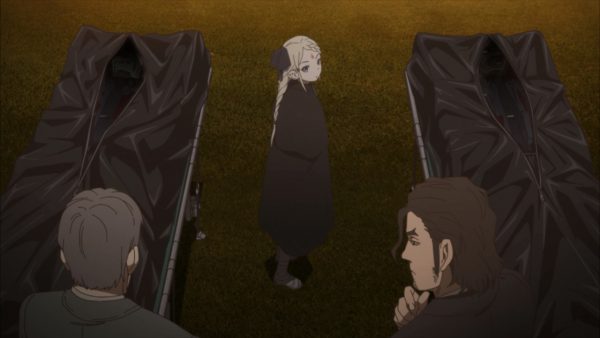 Tilarna confirms that the officers were under the influence of milday

They can’t understand how the police officers could have been users of the evil latena to get them to a state where they could be controlled like that.  Tilarna suggests that the special use of gold can, under certain circumstances be used but there was nobody in her world that would be skilled enough to be able to craft such a device.  Kei suggests that it could be a digitally controlled precision machine.  He does some digging around using his phone while they eat at a restaurant.  He manages to find a lead, someone who could have bought such a machine and it turns out to be Dennis Elbaji, a Semanian club owner.

Tilarna excuses herself and leaves the table, she leaves her sword.  After a few minutes,  Kei notices that she hasn’t returned.,  She’d done a runner (and left her sword!). And there the show ended, wonderful.  This was excellent although I noticed that the graphics weren’t as sharp as last week, not the blur, I just would have expected more detail. Story, characterization, and dialogue were wonderfully written and held my attention throughout.

The next episode is called Midnight Train.  I’m really looking forward to it!