Ritsuka Fujimaru and Mash Kyrielight are given the job to save humanity from demons and monsters that are part of the final singularity in ancient Babylonia (in 2655 BC). When they arrive, they learn that three gods have threatened the main city of Uruk ruled by King Gilgamesh 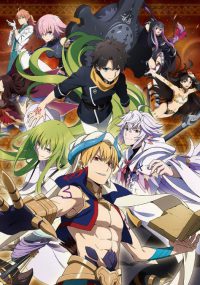 Fate/Grand Order – Absolute Demonic Front: Babylonia is a Japanese fantasy anime series produced by CloverWorks. It is part of the Type-Moon Fate franchise. It is also an adaptation of the “Babylonia” chapter from Delightworks / Aniplex’s role-playing mobile game called Fate/Grand Order. The amine series began airing on 5th October 2019 in Japan.

What is it all about?

“It is set in the first age, when gods and humanity part ways….”

Previously, our heroes Ritsuka Fujimaru and Mash Kyrielight, were involved in successfully combating the forces of darkness in the Camelot Singularity.  Their next job, is to save humanity from demons and monsters that are part of the final singularity; in 2655 BC Babylonia.

Upon arrival, they learn that three gods have threatened the main city of Uruk ruled by King Gilgamesh. Ritsuka and Mash stop the invasion of mysterious beasts while investigating the true nature of the three gods’ actions against humanity – if, indeed, they are against humanity.

However, there are other powerful demonic beasts that complicate their activities.

Is it Worth Watching?

It is great, one of the better anime’s in the Autumn/Fall 2019 season and should not be missed by any fantasy anime fan.  It is well drawn, and the colour palette is strong and vibrant  – its a great show to look at!.  The use of 3d graphics actually ads to the show’s story and isn’t too jarring on the eyes – the voice acting is really good too.

The story opens with King Gilgamesh, the enigmatic King of all Babylonia, sitting on his throne in his capital city Uruk.  He gets up and walks up the stairs to the roof of his palace. 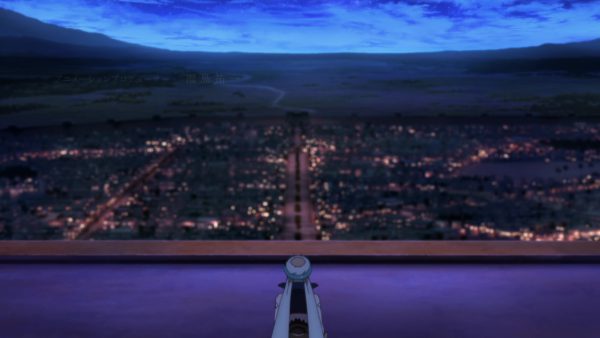 He looks up to the sky and says, “Oh?  So you will arrive Chaldea? The lone candlelight that illuminates many a star” (erm.  what?  That’s some bloody big candle!)…..

He raises his hands and adds, “Then come forth, to this land where the times of gods and deeds of humans intersect.” 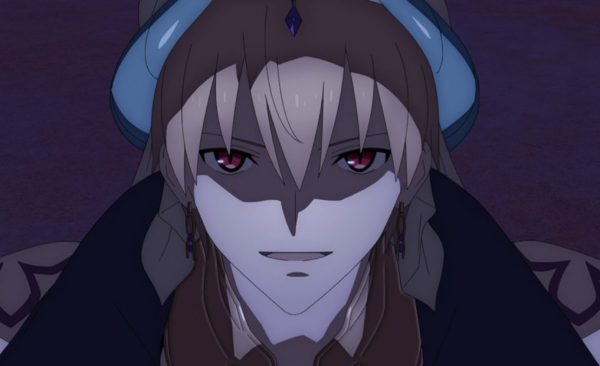 Elsewhere, in a cold outpost somewhere .. erm … else (it didn’t say where).  a pink haired girl called Mash Kyrielight with shaggy, unkempt hair is late for an appointment with Dr. Roman and her Senpai, Ritsuka Fujimaru.  They are, in fact, members of Chaldea, an organisation that has completed its preparations for the rayshift to the Seventh Singularity (it all sounds great but doesn’t actually tell us what they are doing!)

They are actually part of an organisation called the Grand Order that are working towards fixing a problem in the year 2017 when a singularity caused the incineration of  humanity.  They have restored six similar singularities as part of their goal and this will be the final job. 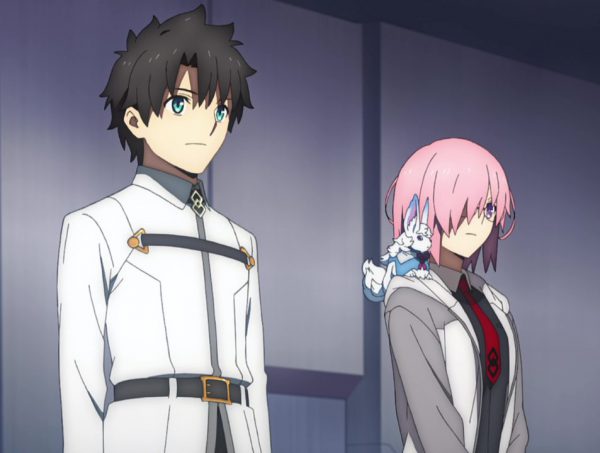 Mash and Ritsuka are told that they must travel to one of Earth’s oldest settlements in ancient Mesopotamia and fix this final singularity.

They get changed and make the Rayshift to Babylonia. 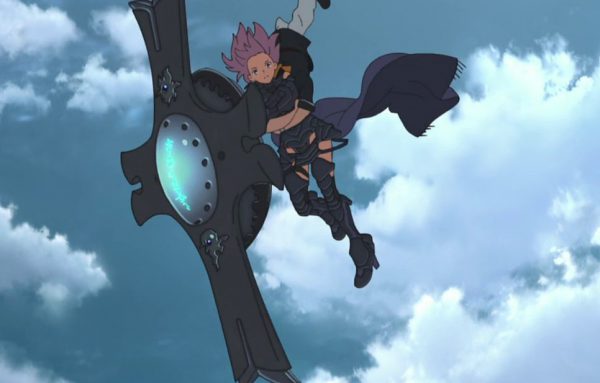 The Rayshift lands them 1000 meters in the air!

Unfortunately the materialise a mile or so in the air and, thanks to some miraculous shield work from Mash, the two land relatively safely (but still with a thud).

They take stock of where they are and decide to head towards the main city of Uruk.  On the way, they encounter some demonic beasts that look a little like Cool Demon Lions.  Mash makes short work of them with her shield.  Which was a shame really, they looked great!  In fact, at this point everything looked great. 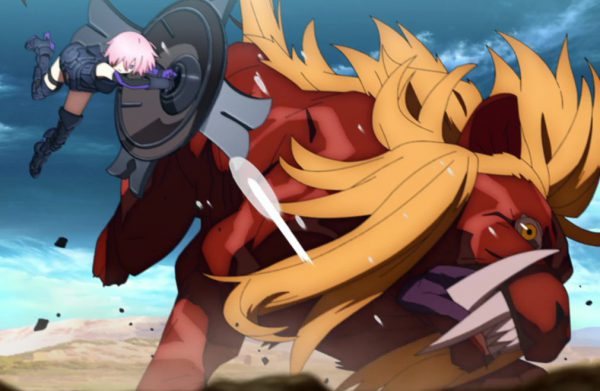 The scenery was amazingly drawn and there was even a healthy amount of gratuitous fan-service knicker shots to help keep things interesting. 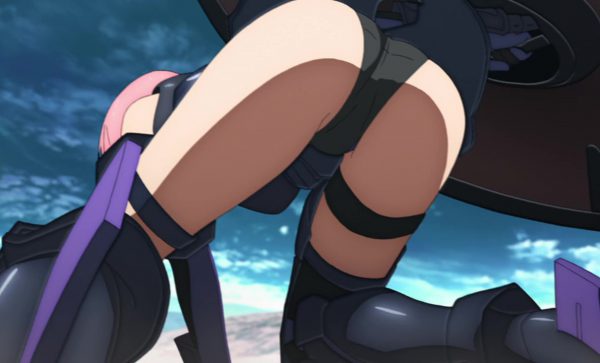 After the battle, they examine the beasts as they have never seen anything like them before.

Very soon after, a young girl wearing hardly any clothes, drops out of the sky and lands on the lucky Ritsuka. 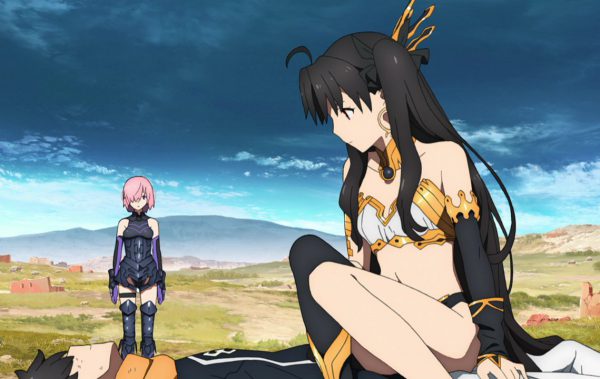 It seems like the lady who dropped in on them is a little stuck-up and has quite a few airs and graces.  She is mildly annoyed that Ritsuka touched her when she fell on him but after chatting, she soon realises that they don’t know who she is and therefore don’t understand the penalty for such actions. 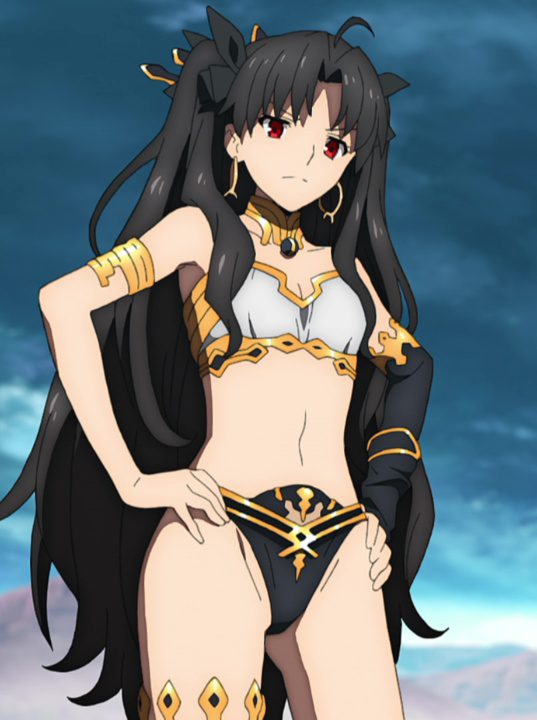 She forgives them, sort of.  She refuses to tell them her name but asks them pointedly and slightly accusingly, if they have seen anything valuable looking lying around.

Suddenly they are joined my many more of the demonic Lions and although the goddess girl kills a few of them to help, she points out that if they can’t handle simple demonic beasts such as these, then they will not be able to deal with the ‘curse of humanity’.  She them leaves them to fend for themselves. 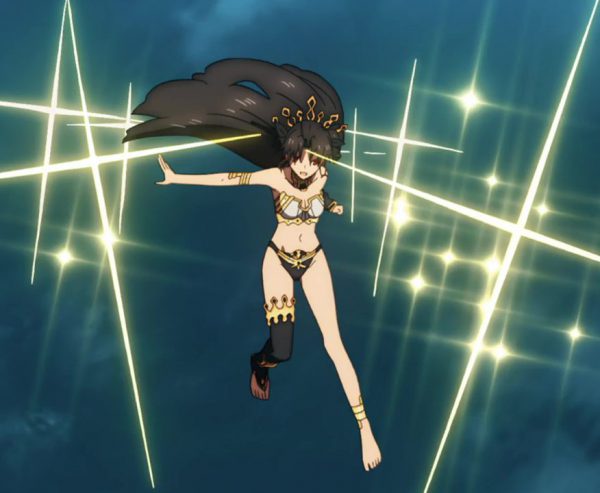 They decide to make a run for it but they are soon assisted buy a woman dressed in a monks smock with green hair.  She quickly dispatches the rest of the beasts and walks over to them.

She is another one who doesn’t want to introduce herself. Strangely, she believes that by fighting the beasts, she has provided all the introduction necessary.

Back at Grand Order Headquarters, the team discuss her real identity. The Grand Order Team are able to establish intermittent communications with Mash and Ritsuka. The modest deity in the monks smock is called Enkidu, the ‘Chain of the Gods’.  Her role in this saga is, apparently, to return King Gilgamesh back to the Gods.  It seems that he doesn’t want to go back and although he is considered a tyrant, he would not harm Enkidu who is considered a hero. 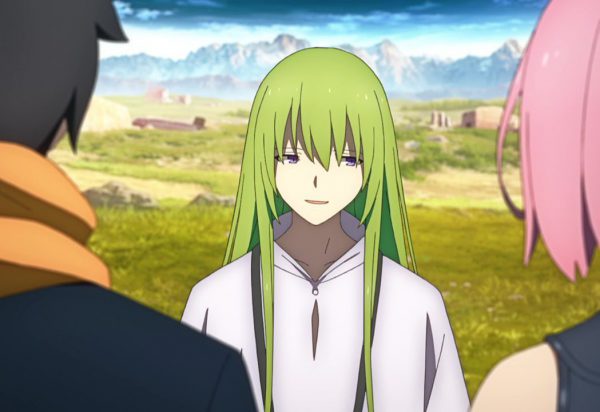 She overhears their description of her as it is transmitted to Mash and Ritsuka.  She is quite modest and a little embarrassed.

They shake hands and she agrees to guide them to Uruk. We are treated to some excellent landscape scenery as Enkidu narrates some of the backstory. 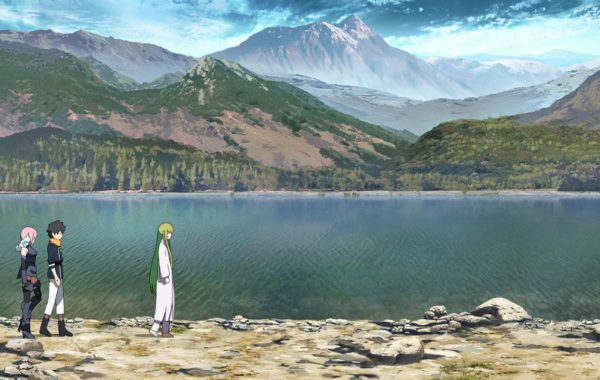 Apparently, history was altered by some unscrupulous people who used the Holy Grail.  The mage king created singularities in order to make the foundation of humanity collapse.

Enkidu was ordered by the chief priestess of Uruk, to protect the travelers from afar.

The ruins that they had seen earlier were because demon beasts have all but covered the land of Mesopotamia and humanity in the area is close to extinction.  Most of the survivors are now in the huge central city of Uruk.

Enkidu reports that now, the enemy of humanity isn’t the mages who control the Holy Grail, but the alliance of three goddesses who control 60% of the Mesopotamian land mass.  There is a goddess of demonic beasts, that is actively trying to destroy humans.  But all is not lost.  There is a sanctuary, a fortress to help save humans and keep the demons out. 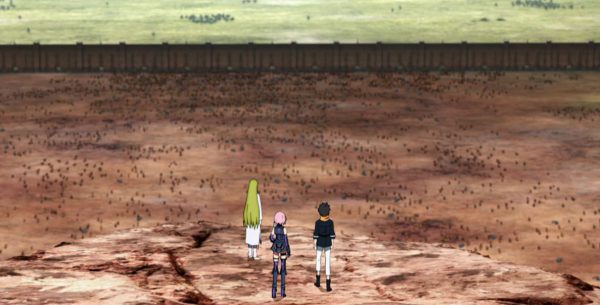 And there this awesome episode ended.  I really enjoyed it and it seemed to go far too quickly (which is always a good sign I guess).

Fate/Grand Order – Absolute Demonic Front: Babylonia episode 1 was really well put together and gripping throughout.  The graphics were great, and the sound and voice acting were very good too.  If I were to be negative about anything, it would be the complex backstory ….. too much narration in the first episode to set the scene.

I reviewed this episode after seeing it twice and I missed sooooo much of the story in the first showing.  If you like, this, it would be good to watch it again because you are sure to pick things up that you missed.

After only the first episode, I can confidently say that I’ll be watching this to the end of the series.

What did you think?  Please select the User tab in the Review block at the top of the page and enter your star ratings.  We’d love to see what you think.