It was great to see Lyekka but it wasn’t the best of stories. I guess it was setting the scene for the next show…. Can’t wait! Whoopeee!!! Lyekka is back! She arrived in all her glory, sexy (though wearing too many clothes) and ravenous as always. The show was also pretty hefty on graphics, not just the big landscapes we have come to know and love, but the amazing people at CAGE did a WHOPPING job of lots of little fiddly graphics in the garden, many were subtle but still really entertaining.

This great show opened with the decent of the Moth carrying Kai and Stanley looking for Xev at the surface of Fire (near the base of Hog Town). Surprisingly, Prince had not killed her (I wonder if he really does like her after all). But she does look very dusty and weak.

Eventually they find her and take her back to the LEXX. Stanley chats to her about their dilemma while she showers (no nipples in this scene guys – but a very shapely back). Stanley is sick of the problem of what to do about LEXX. He is sure that their only option is to find a place on the planet Water and let the LEXX crash. They only have 151 hours left.

LEXX confirms that he cannot fly unless he eats a LOT of food. Kai is not sure that they can gather enough food on the Water planet before the LEXX orbit decays enough for it to crash.

Stanley decided to get a good night’s sleep (?!?) and dreams of the lovely Lyekka. She appears to him in a lovely thin white dress and looks simply stunningly lovely. He chats about the fact that she is a plant and that she is smooth right round the bend. “Yes, I am smooth right round the bend.” {20KB wav file} She confirms politely. Stanley is keen in finding out if she is still able to make him feel good (ie. sexually).

Unfortunately for him this means that he must be gobbled up… erm… ALL of him. T

hen is a horrible scene we see Lyekka tells Stanley that she is hungry and wants him to feel good, she opens a very contorted and wide mouth as if to eat him whole! Stanley wakes up just in time.

Later, they all go to the Water planet surface. Xev asks what they should do, should they try and find food for the LEXX or a place to live. Stanley feels that it should be the latter, but Xev is undecided, she asks Kai for his opinion. “I think you should do whatever brings you the most happiness.” He says unhelpfully. 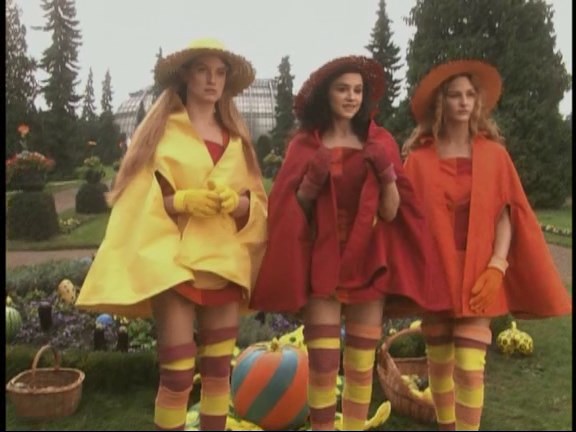 “Well that’s very helpful Kai. Thanks a lot pal.” {26KB wav file} Says Stanley with a sort of Homer Simpson way. They notice a large number of ships departing from a particular city on the planets surface. They find three lovely garden maidens in a very lovely garden. They are even singing a lovely garden song.

Stanley is very impressed by the ladies and they show our three hero’s around. The girls are named after flowers, tulip, daffodil and Lilly. The girls are the only gardeners in the city. The soil is VERY fertile and there are no males (excepting the stamens in the plants). Apparently they have no idea of the concept of sex except between plants and do not therefore have any need for blokes.

Stanley spends much time trying to persuade the girls to show him some sexual attention. Meanwhile we see the gardens bloom and flower and spores escape. Beauty and tranquillity it seems, is all around. Stanley attempts to chat up each of the girls. one in particular, Lilly is holding the craziest watering can you ever saw. She would delicately tip it over selected plants and water would ejac…. Erm… dribble out. (it was actually quite disconcerting as she would walk towards the camera pointing this thing at us!).

Stanley is very keen to make this place his home, Xev is not. She wants them to either move on or feed the LEXX. Kai seems disinterested and decides to bury himself in the soil in order to de-compose. This is a strange reaction, I don’t know if it’s because of a certain intoxication from the spores or simply that he biding his time until Xev or Stanley have need of his assistance. Stanley approaches Tulip in the Garden. He notices her bending over to water the flowers. She is either being extremely provocative or absolutely naive. Stanley walks over to her and gently feels her bum with both hands (a little forward that I thought, even for Stan ley!). She has no response whatsoever. But she does give him a slice of melon (?!) Stanley is more than a little disappointed.

Xev starts to behave strangely. It’s as though she is drunk. She crouches beside a very lovely stream and sings a song about a garden giving. Then she eats a mushroom. She experiences memories of her past and a whole lot of dizziness.

After Stanley has approached each of the flower gardeners he finds that although they are friendly, they are not friendly in quite the way he wants. However he does learn that the Flower Gardeners can make flowers to order. They seem to be able to extract one of Stanley’s dreams and grow a plant from it. Stanley considers this for a moment and eventually asks that they grow a Lyekka.

After a pretty ritual and some mushroom eating, Stanley’s dream is extracted and placed in the ground. Then, very quickly, up sprouts a Lyekka. She’s very pleased to see Stanley again, but she’s also hungry and looks longingly at the three Flower Gardeners. Stanley takes Lyekka to meet Kai. He greets her warmly (or as warmly as a dead geezer can greet a plant) but Lyekka simply tells Stanley that Kai is dead and turns her head away (fairly rude I thought).

Lyekka walks off alone and discovers a Flower Gardener on her own. The Flower Gardener is very appreciative of Lyekka. Lilly exclaims excitedly that she wants to make Lyekka very happy and when Lyekka asks what would happen to the garden, Lilly replies that another gardener will come and she will want to make her happy too. And with those fateful words, Lyekka eats the lovely Gardener. Almost immediately, another flower comes along (this one is called Daisy) and Stanley catches up with them. Xev appears and is surprised to see Lyekka. Stanley tells her that Lyekka will show the gardeners how to please Stanley.

Whatever intoxication Xev suffered, she seems to have got over it now. She tells Stanley and Kai that she is leaving. She will go back to the LEXX, find 790 and find a nice place to live. Xev, as we all know, is not a vegetarian, she is most certainly a meat eater and lets face it, there is no meat in the Garden city. 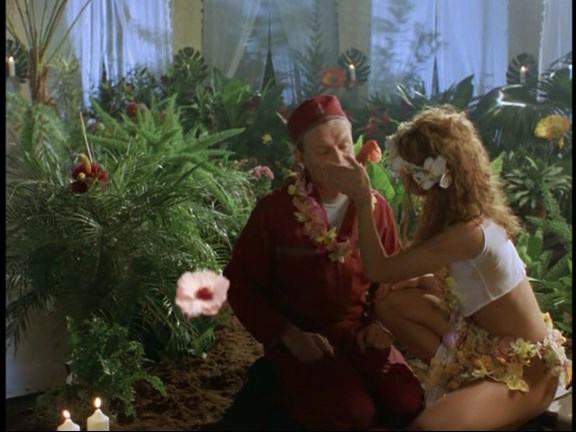 Stanley is being fed provocatively by the lovely Flower Gardeners under instruction from Lyekka. Xev joins him to say goodbye and Stanley and Xev feel very sad to part. Stanley asks if it would be alright that they be neighbours and visit from time to time. They embrace warmly (and tearfully – it was quite sad really). Xev decides t leave in the morning. Later, Stanley asks Lyekka if she really likes Stanley as a geezer and not as something to eat. Lyekka is hungry however and goes off to make a mean of all three Flower Gardeners. They do not resist at all. Lyekka returns to continue entertaining Stanley. Kai is singing in his little plot and Xev is sleeping peacefully. HOWEVER, as night draws in we see that the Garden City is surrounded by many many balloons – it looks as though the city is about to suffer and attack!

And there this ninth episode ended. It was great to see Lyekka but it wasn’t the best of stories. I guess it was setting the scene for the next show…. Can’t wait!