In the pilot episode, we were introduced to the Character Six of one.

In the pilot episode, we were introduced to the Character Six of one. The hyper-sexy cyborg of the Jupiter 42. Luckily for us, T’Nuk was not in the pilot. Because if she was, TTR would have never been picked up by a major network!

If you were to see T’Nuk in a pub, you’d run out the door as quickly as possible.

T’Nuk is just ugly. Completely ugly, with a mouth to match! This six limbed alien pig has a bad hair cut, three saggy breasts, and rotten strawberry yogurt skin, complete with the rotting fungus! Not only is she ugly on the outside, but she’s twice as worse on the inside. She’s cynical, (like 60% of the crew) and completely hard as nails. A striking contrast to the slacker extraordinaire Whip. And while most of the crew swear like any other space sailor, T’Nuk takes her profane vocabulary to a whole new level.
T’Nuk is the ships pilot. Chode keeps the alien trash on the ship for only one reason: her patent pending form of verbal abuse is the only thing that can keep Spaceship Bob in line. If it were for her tireless efforts to put down the “special” AI, Bob would keep the Jupiter 42 docked in the most crowed space port he could find.

Originally T’Nuk was married to Darph Bobo, and escaped her husband to work for Chode. Hence why Bobo hates Chode so much. But that scene was removed from the pilot episode, and those events never happened. In 2001 Space Idiocies T’Nuk was engaged to Bobo for a short time, but there has been no further romantic encounters between the two. 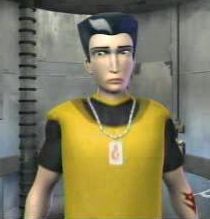 Tripping the Rift: Transcripts: S01E05: The Devil and a Guy Named Webster