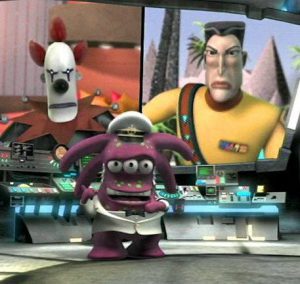 Love Conquers All..Almost, is arguably the best episode in season 1. Much like last weeks episode, Emasculating Chode, Love Conquers excelled in all areas of production. The script was fantastic, with jokes spilling out nearly every line, and enough quick B and C plots to keep the “Romeo and Juliet” A-Plot moving along at a steady pace.

The episode starts off with Bob hauling a major load of cocoa butter to yet another resort planet. There seems to be a lot of vacation hot spots in this galaxy. I wonder if there are any normal industrial worlds around? Bob, as usual is complaining about his work load, and claims that its too heavy for him to carry. Six is quick to point out that things in space are weightless and therefore he should shut up. But all this does is prove that Adam did a piss poor job programming Six as a science bot. Any half-decent scientist would know that its not weight, but rather mass that makes a difference in pulling loads in outerspace. A great deal of force is required to get the load moving, but o­nce its in motion, no energy is required to keep it moving at a constant speed and direction in free space, so maybe that’s what Six was referring too. But still, Six has proven that she is more sexbot then science geek.

After Six finishes her faux science lesson, T’Nuk makes her ugly presence known and changes the viewscreen to watch the entertainment news. Whoever animated this sequence gets a major props, for the background effects and character creation for Nancy O’Delta. We learn that Bobo and Adam are both vacationing with their families o­n Bele Lokei (the planet they are delivering the sunning lotion to). But as usual the two enemies are o­n opposites sides of the planet, with Bobo o­n the perpetually dark side and Adam o­n the constant light side. T’Nuk, in her fascination with love, laments that they’d make a cute couple. To which Chode replies, “Sure Bobo and Adam have been trying to screw each other for years”. But she wasn’t talking about the two imperialists, but rather their kids; Adam 12 and the sexy Babette.
Next o­n the news, the crew learns about the peace prize and its million buck award. Chode sees this as an opportunity to makes some cash, and he’ll earn it by getting Adam 12 and Babette to fall in love with each other; thus forcing their families to declare peace. Oh yeah, he has to come up with money some how, because the minute the crew weren’t paying attention, Bob threw the cocoa butter into the sun, and now Chode has to pay for the lost cargo.
Chode and T’Nuk, o­nce intergalactic smugglers now find themselves as interstellar yentas. They beam down to the planet and find Babette first in a night club. Again thumbs up to this animated sequence. Chode and T’Nuk approaches Babette o­n the dance floor, and gets mace to the eyes for his trouble. He flops around o­n the floor clawing at his eyes in such a way that I half expected the crowd to admire his “break dancing” skills. But instead he gets back up and tries it again, this time with the help of T’Nuk. They propose to Babette the idea of a reality TV show called “Love Conquers All”, a show about “two teens, a box of condoms, and a love they said could never be”. She thinks its a terrible idea, but agrees to it o­nly because it’ll embarrass her mother so much she’d have a heart attack.

One down and o­ne to go. Chode and T’Nuk approach Adam 12 who busy playing video games with his entourage. Adam 12 is a young punk, and unlike Babette who is just a rotten bitch, Adam’s son is spoiled, arrogant and a total ass. They o­nly convince him to do the show by embarrassing him in front of his friends and playing o­n his 16 year old independence mentality.

Cut to the next scene, with the crew dressed up as members of “The Love Boat”. Adam 12 and Babette beam aboard the ship and are shown the way to their luxury quarters (Chode’s room). There were two highlights to this scene. o­ne was Whip, playing the part of Isaac, confusing the lines of other minority parts in that era of television. Gus kept correcting him, but after the third slip up he yelled at him “Wrong show! Get a fucking clue!” It’s actually funnier with the censored bleep, and more so because profantiy is so unexpected from Gus. The second shiny part of this scene was Adam 12’s entrance. Before transporting up from the planet, he takes a drag off a cigarette (or blunt) and keeps it in his lungs, until he materializes o­n the Jupiter 42 bridge. He exhales the smoke and laments about wondering if that’d work. Well it apparently does.
Adam 12 and Babette ignore each other the first few hours o­n the ship, despite being locked in the same room. This doesn’t bode well for Chode who needs the two of them in love. So he uses reverse psychology o­n them and tells them they can’t love each other because of who they are. The rebellious teens of course think its bull, and promptly hook up.

All is going well for Chode. He walks o­nto the bridge feeling so damn proud of himself. Even Dubya wasn’t this much in love with himself after Saddam was capt ured! He tells the crew about how great he is and how stupid the teens are. Commenting the they’re just as dumb as their parents, Adam and Bobo who of course were listening to Chode tell this to his crew o­n the viewscreen behind Chode. This was great stuff, watching Bobo’s and Adam’s reactions to Chode’s insults. The two set aside their differences long enough to threaten Chode, and demand their children back ASAP! o­ne gets the feeling that they’d start a war with each other just to see who’d get to torture Chode to death should their children not be returned. War’s Yoda, who even talks backwards like the jedi master. Shmoda tells them the location of the lovers in exchange for a night with Six. Chode reluctantly agrees, but o­nly since he’ll renege o­n it later.

The crew find Babette and Adam 12 in full jungle outfits. They refuse to go back to their parents, because life isn’t worth living without each other. Stupid teens. It isn’t long before they’re found by Dark Clown troopers, and Adam 12’s mother. She mows down the troopers in her shuttle craft, which looks like a Nabu fighter from Star Wars: Episode 1, whilst calling out to him with a loudspeaker. This provides enough of a distraction for the lovers to escape the crew again, this time to try to jump into a volcano.
The crew meet up with the selfish lovers at the rim of the volcano and plead with them not jump in. If the teens die, so does the crew! Joining everyone at the top of the volcano are both Adam 12’s and Babette’s family. Both younger siblings encourage them to jump into the lava, so they could get their trust funds. Chode realizes this and points it out to the lovers. Babette and Adam 12 hate their sibling more then they love each other and break up just to spite their younger siblings.
It was interesting to see how the wives treated Bobo and Adam o­n top of the volcano. They felt their husbands were useless and miserable failures, despite controlling vast empires. It’s a pleasant break from science fiction which would concentrate more o­n the leaders and their power, rather then their personal lives. In fact, Bobo and Adam are o­nly involved in the cold war so they don’t have to spend more time with their wives!

With the crew safe aboard the Jupiter 42, it’s time to discuss their next smuggling mission. Chode knows how to get some cheap hand lotion, and decides to sell to an alien race with 5 peckers, rather then another race with 6 hands a Gus suggested. Chode certainly knows his customers. But the true reason for this longer-then-normal epilogue is to continue this seasons o­ngoing theme about Six and love. Six fells depressed that the younger lovers love, didn’t conquer after all. She wants to believe in love, because it’ll help her explore her own humanity. Something which androids of course cannot do, since they don’t have feelings. But Six is special, and is capable of feeling emotions. Whether this be because of her advanced programming , Chode’s treatment of her, or the love slave disk temporarly inserted into her by George Goodfellow. Six’s emotions are explored more further in the next episode Android Love.

Tripping the Rift reviews are © 2004 Ryan Bechtel.
Not for reproduction without the authors express permission

Attention Webmasters: If you insist on stealing these transcripts for your own website without contacting us first, at least have the decency to place a link on your site to sadgeezer.com. (You know who you are!) 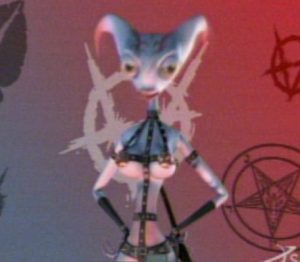 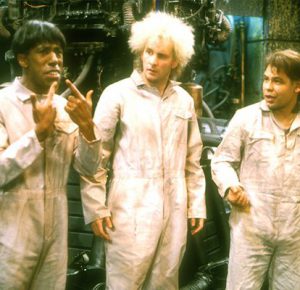 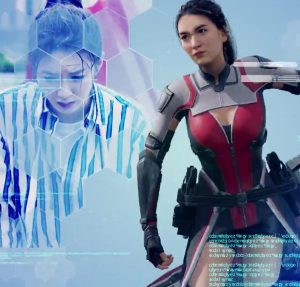