This episode closed the mini arc on the Vampire but didn’t open any new stories which was unusual, they normally like to leave us with a cliff-hanger. The show was ok I guess, not as much fun or as interesting as the previous episodes but certainly watchable.  I’m still interested to see how the whole Zalada thing pans out

This fifth episode was quite conclusive and really nicely paced.  The characterisation was wonderful as usual and the pacing was quick and full of surprises.  If you need to see any reviews of the previous episodes, Click the titles: 1. Cop Show, Witch Craft, 2. Dragnet Mirage, 3. Midnight Train and 4. In the Air Tonight.

The show so far is about a young female Semanian (alien) knight who has traveled to Earth through the portal that has opened up between her world (a place of magical and mystical creatures such as elves and fairies etc.) to work with the police on Earth to battle injustice and some of the wrongdoings of her people (and humans), some of whom are being used and abused for Semanian profit.  The knight is called Tilarna and she suspects that the person who was responsible for the death of a friend of hers, an unscrupulous dude called Zelada, is still alive and heading up some illegal operations on Earth.

In the meantime, Tilarna is trying to save another friend of hers (who happens to be the ex-girlfriend of her police partner, Kei) from a gruesome death by a vampire who has been revived on Earth from the old world. 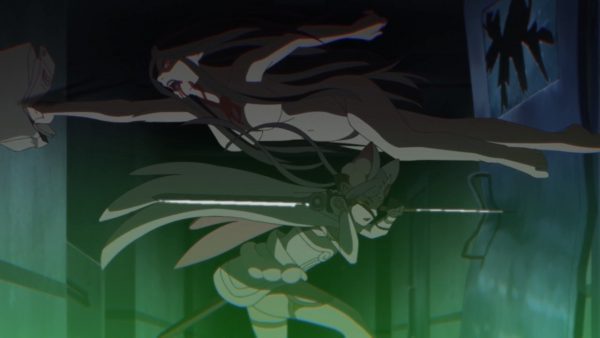 Vampires from the old world are formidable creatures and it was thought that they became extinct.  Tonight’s Episode is called Lonesome Vampire

The show opens with the battle between the vampire and Tilarna continuing. It seems that the vampire is unstoppable until Kei arrives on the scene and manages to cause the Vampire some considerable discomfort by spraying her with powder from a fire extinguisher.  The Vampire escapes quickly.

Later, when other members of the police arrive and there is time to question Cecile and discuss what had happened, Kei and Tilarna talk about the nature of the beast they had just fought.  It seems that the Vampire is nigh invulnerable and cannot be killed with conventional weapons.  They can also use latena to help regenerate and blood acts as a catalyst and food.

Tilarna is worried about the other policemen that go after the Vampire and she sport of pays Kei a complement.  She asked why, when he was coming to save her, he picked up a fire extinguisher?  He responded that he didn’t know but it just felt right.  She said that such thinking is what saved their lives and that although he was a distasteful person, she had to respect his battle-sense. 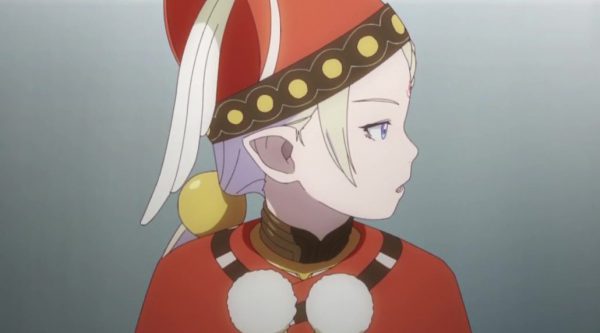 Kei asked if that was meant to be a complement.

The Captain tells Tilarna and Kei that there has been another victim, a truck driver was killed in Alamo Park.  They head out to the scene of the crime.  At this point some idiot detective tries to blame the incident and the Vampire on Tilarna.  For some reason, Kai doesn’t punch him on the mouth, the defence of the little Semanian is, surprisingly, handled by the boss, Inspector Zimmer who explains to the stupid cop that she works for him and is a valued member of the force. 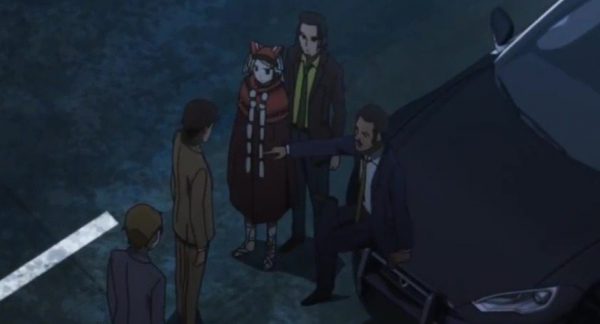 They head out to Alamo Park where they discover that teh truck driver was killed while he was still driving the truck.  Two witnesses said that they saw the vampire leave wearing a dress made of black flames.  Tilarna explained that this meant she had enough of her strength back to use one of her powers which could also manifest itself as clothes.

In a pointless exchange, Kei also asked if Tilarna could use such powers to which she replied that she could but she would have to be naked and it required a lot of concentration.  She then accused Kei of trying to imagine her naked and concentrating.  Which he denied I’m sure he lied, after all, half the viewing audience were.

Kei then asks Tilarna to use her senses to determine where the Vampire is hiding.  She points to a shopping mall. 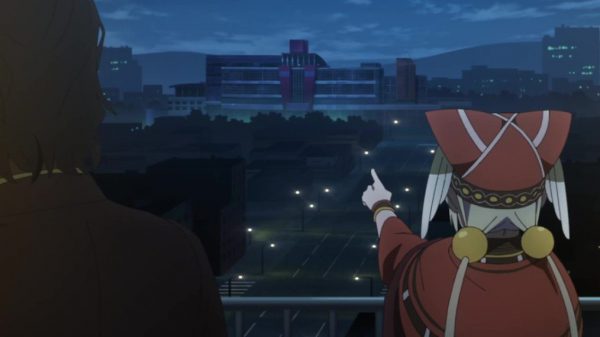 They head to the shopping mall and call for reinforcements.  Kei instructs them not to attack the Vampire but to leave it to he and Tilarna.  They go into the Mall alone and a Tilarna leads them both straight to her. 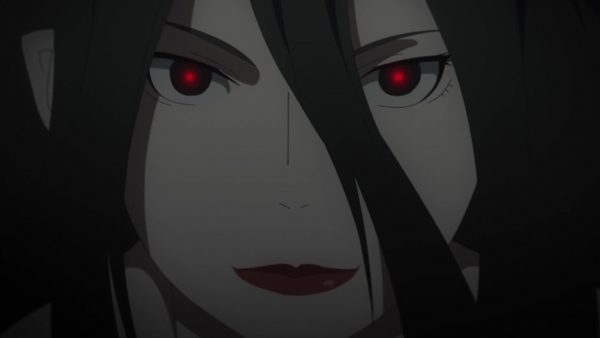 A fight breaks out and Kei is pushed over a balcony and lands in a large pool of water, perhaps a fountain,  He passes out to the sound of the Vampire laughing.

A few moments later, Kei is being revived by one of his detective colleagues, Tony with his partner Alex.  They tell Kai that Tilarna is missing along with the Vampire. They try to follow.

Battle with the Vampire

Meanwhile, back at the Vampires lair, Tilarna is being questioned.  The Vampire has worked out that they are on another world and also that an ancient prophecy has come true that a portal to another world would be opened (she called it a gate).  Suddenly they are interrupted by Kei and is detective buddies.  Although the Vampire believes she can become invisible, Kei and his colleagues can see her and they open fire.  She is injured (though not for long) and manages to escape. 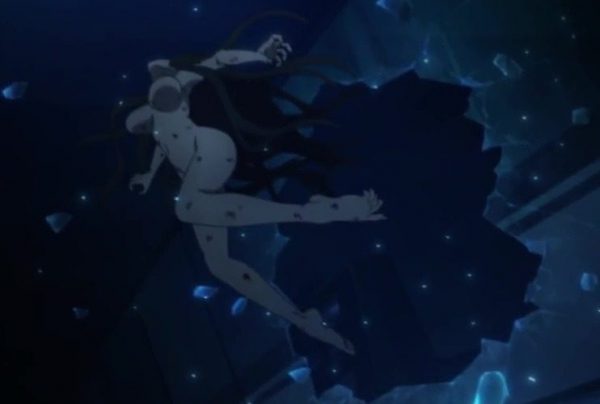 She does however, leave a trail of blood which the immediately follow.  Just when it’s looking black for the Vampire, a spell is cast and a voice tells her that she should head to the underground.  A green light appears which she is to follow, and this will help her escape.

Kei and Tilarna in the meantime, have lost her trail and work out that the shopping mall’s ventilation system links to the local underground and provides an escape rout that they had not yet checked.  They run for it in the hope of catching up with the vampire.

When the vampire gets to the underground she sees the person who was talking to her.  I suspect that this person was Zalada but we don’t actually find out.  He tells her that he wants to help her and in return, he hopes that she will tell her about the Prophecy of Niba. She declines and decides that her best option is to kill him and drink his blood.  He tells her, as he dies, that he is disappointed – I guess the dude has a mastery of the concept of understatement but I suspect that this was Zalada using the body of some hapless person to do his dirty work remotely. 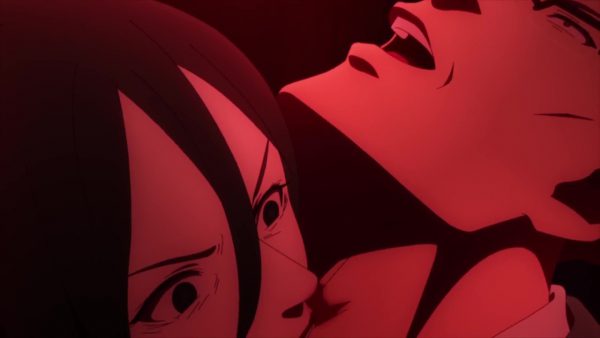 At this point, Tilarna and Kei arrive and begin fighting.  They are annoyed that she has taken another life but aren’t aware that this person had assisted the.  Eventually, the vampire is shot so much that her movement is impaired.  She manages to pin down Kei in the train tracks but is killed by the train moments after Tilarna saves Kei by pulling him from the vampires grip.

The Vampire is dead and cannot revive herself and Tilarna suggests that she revives some appreciation for having saved his life.  Kei tells her, “Thanks…….. is not a word she will ever hear me say.” 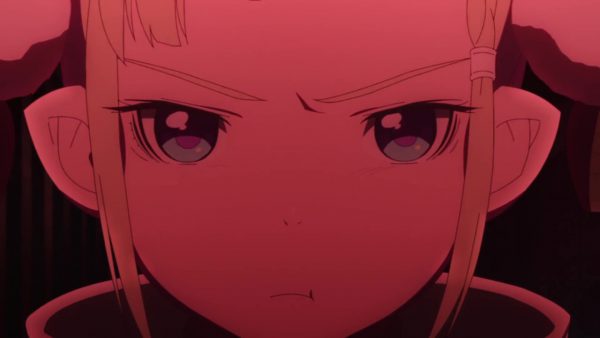 That really annoys her and she starts kicking him.  I guess that is supposed to be funny but seemed a little over the top.  Kei then makes some inane joke about the idea of going to sleep in a coffin when the sun comes up sounds better than the reports that he will be writing.

Then the show ends.  This episode closed the mini arc on the Vampire but didn’t open any new stories which was unusual, they normally like to leave us with a cliff-hanger. The show was ok I guess, not as much fun or as interesting as the previous episodes but certainly watchable.  I’m still interested to see how the whole Zalada thing pans out.

Did you know you can rate the episode yourself?  Just select the User tab in the review block above and let us know what you thought of Production, Direction, Characterisation, Storyline, Acting and if it was Cool/Sexy/Fun?  You don’t need to register to rate the show.

If you need to see any of the previous episodes, Click the titles: 1. Cop Show, Witch Craft, 2. Dragnet Mirage, 3. Midnight Train) and 4. In the Air Tonight.