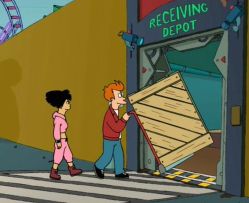 One of the difficult things about a writing a review for an older episode is trying to put everything in perspective. No matter what show, early episodes usually suck when compared with material found in later seasons. This episode takes no exception to that. I remember watching the episode for the first time a few years ago, and not thinking it was that bad, but today I think of this episode as filler.

It’s really just a continuation of the pilot episode. We are further introduced to the show concept in the form of a commercial for Planet Express. The Professor plans to air it during the superbowl, but not on the same channel. The ad features a planet express delivery boy going through all sorts of hell to deliver his package. And even more hell when he’s done his job. Yep this is gonna be a fun series…

But their first delivery isn’t to anywhere special, just the moon. The moon seems like a logical first planetoid to visit for a sci fi series. But before they can leave, the crew has to go through all the fun-pre employment processes. Leela has to meet with Hermes Conrad, the company beaurocrat. He has her sign some papers that don’t hold the company responsible in the event of an “unforeseen accident”. Which is beaurocratese for company negligence. Fry has to visit the company doctor, a crustacean fellow by the name of Dr. Zoidberg. The Professor claims he’s a little weird since he wears sandals. Now I found this somewhat insulting. I’ve been wearing sandals for so long that I have a permanent Teva tan. That Professor just made my list… It quickly becomes evident that Zoidberg’s odd qualities have nothing to do with his footwear and more to do with his medical knowledge, or lack thereof. The crab’s a quack! He knows nothing about humans, but gives Fry an exam anyway, determining he’s healthy as a crab.

Bender has it the best of the three. He’s being cleaned out by the cute company intern Amy Wong. She’s a klutz engineering student of the Professor, and more importantly; shares his blood type. Once the three are approved for flight they load up the ship with the cargo and get ready to launch. Amy wants to tag along too though. Leela allows it so long as she doesn’t mess up. Leela doesn’t want to mess up her first day on the job. That’s more of a fourth day sort of thing.

Checkout other News & Reviews from Sci Fi SadGeezers:
Futurama: S03E05: The Luck of the Fryish

And before Fry can count down from 10 to 8, the Planet Express blasts off and lands on the moon. They must’ve been going at 0.9c or something! The moon in the year 3000 is a tourist trap. It’s just like Disney World, only campier, believe it or not. Fry wants to explore the moon and live out his dream, but Leela wants to do the job and leave. After a little more complaining Fry and Amy wear down her resistance and Leela says they’ll visit the park after they finish the job.

Leela runs off to do her captain duties, whatever the hell that is, and leaves the keys to the ship with Amy. Amy and Fry will lock up the ship after they leave with the package. Sounds simple enough right? Well they lock up, deliver the package, and accidentally lose the keys to the ship. When using the magnetic lift the keys were pulled out of her pocket and dropped into the crate they delivered, only she doesn’t realize it for a while. D’oh!

After they deliver the package, the crew goes into the park to have fun. Everyone is content with the park, except for Fry. He wants to see the cratered moon, be in a space suit and do all the other crap we’d have to do to survive on the moon today. So Leela takes him to the lunar rover ride. It’s educational so the line is short, and Fry can see the lunar surface in a space suit. Fry in a show of unusual intelligence points out all the flaws on the ride, and derails the r over so he can drive around and do donuts on the moon. Leela agrees to tolerate it for another 10 minuets, before they’ll turn back.
Back at the park, we spot the package the crew delivered. It contains all those cheap ugly gussie dolls in the claw machine. It’s emptied into the machine, and in goes the dolls and the keys to the ship. Luckily Amy spots the keys and spends the next few hours and hundred dollars trying to extract the keys with the robotic claw. Bender tries to use his own arms to get to the keys, but only succeeds at having security throw him out of the park.The ten minutes has come and gone and Fry still isn’t bored of driving on the moon. He starts to get cocky and does some jumps in the rover. A pretty cool jump too, right into moon quick sand. Quick thinking Leela uses their oxygen tank to escape the quicksand. But at the cost of 90% of their air. So rather then be trapped under moon dirt, they’ll suffocate. Good job Fry! The two walk for a while and soon come upon a glass dome enclosed farm.
Fry and Leela enter the farm and suck in all the fresh air. The redneck farmer approaches and tells them that they’ll have to work for the night if they want to leave with anymore of his oxygen. FYI: a lunar night lasts two weeks! The farmer also says that they must keep their hands off his robotic daughters. Easy enough for those two.

But not for Bender. He too found his way into the farm, and the bedrooms of the daughters. The farmer chases after him with a shotgun. Fry and Leela meet up with Bender in the ensuing chase and use this opportunity to all escape together. The three escape in a moon truck, only to be followed by the farmer in his transformer like robot daughter. They manage to outrun him, but at the cost of their vehicle. Its becoming night on the moon and the two humans need to find shelter or they’ll freeze to death. They happen to find the lost Tranquillity Base, of the first moon landing. Fry and Leela huddle inside the lunar lander for shelter. Now this bugs me a lot, because the lander is no longer on the moon. It was used by the astronauts to launch themselves back up to the lunar orbiter. So it shouldn’t be back on the moon?! one of the background jokes explains it later in the form of a plaque that says that a historic society place the lander back on the moon. Nice save guys!

The tenacious farmer is still at it though. This time he’s come back with a giant plow and plans to run over Bender and the lunar module. But it’s Amy to the rescue. She’s pilots the planet express and with her new skills from the claw machine, expertly picks up Bender and the lunar lander (which isn’t actually magnetic) with the magnetic crane. And with the crew safe, the episode ends.

This Futurama review is © 2004 Ryan Bechtel. Not for reproduction without the authors express permission 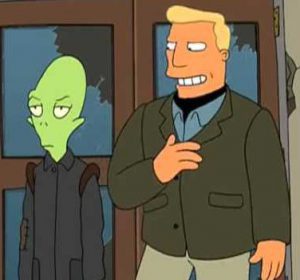 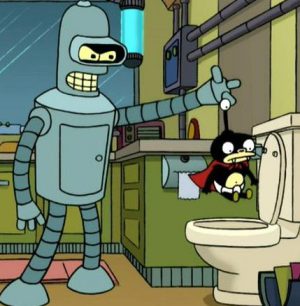 Futurama: S02E01: I Second that Emotion 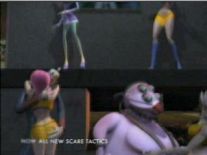