The show opens with a pirate radio station broadcast from a hoopy looking Disk Jockey in orbit around his audience. “2 minutes before the top of the hour,” he says. “Time to take a quick look at the current (weather) conditions.” Suddenly a whole cloud of Mantrid Drones descend on his planet and begin their destruction. The DJ looks on, “Not good!” he says. I’m glad they explained that, I always wondered how a bunch of little armatures could eat stars!

790 goes on to explain that in 93 hours the whole universe will be completely destroyed. They discuss their imminent destruction. Kai explains that the Brunnen G were able to defeat the Insects because although intelligent, the insects were methodical and therefore predictable.

Stanley notices that there is still a Mantrid Drone Arm that they could examine and maybe figure out how to stop Mantrid. It’s a long shot, any computer capable of co-ordinating and controlling an infinite number of drones in the destruction of the universe, is not going to be easy to stop – as Brizon discovered!

Stanley examines the Drone arm in the cryo-chamber room accompanied by insults and other comments of derision from 790. Xev attempts to join them from the bridge but runs into a group of Mantrid Drones . Before this however, and I’m not sure as to the significance of this, Xev notices a butterfly in the passageway. She picks it up and lets it fly away.

Stanley too has been attacked by Mantrid Drones. He hides in Kai’s Cryo chamber with 790. Then a whole host of Mantrid Drone arms descend on the Bridge. Kai attempts to destroy them with his handy wrist gadget, but there are too many of them. They begin to attack Lyekka’s pod! (Bastards!)

Lyekka descends from the remains of her pod. She tells Kai that she is all right, but that her pod is not. Meanwhile Stanley is under siege! A drone arm breaks into the cryo pod and Stanley suggests that 790 could control it if Stan were to take off the head of the Drone Arm and replace it with 790. He does so and rather too simply, plugs 790 into the arm. on the Bridge, Kai mentions that Xev and Stanley are probably in trouble too. They head off to find them.

Checkout other News & Reviews from Sci Fi SadGeezers:
The Prisoner: Episode 04: Free For All

In the cryo chamber, Stanley discovers to his dismay that 790 can indeed control a Mantrid Drone arm. 790 says, “Stanley, I’m armed!” and viciously grabs Stanley’s crotch. Stanley squeals in pain but has the forethought to mention that Xev might be in trouble. 790 relinquishes his grip and fly’s off to save her.

We learn pretty quickly, that the Mantrid Drone arms are no match of the 790 drone arms in battle and Xev and Stanley are saved. Stan greets Lyekka, but he is saddened to find that she does not need to eat anymore, he pod has been destroyed – and therefore, Lyekka will not herself have long to live! This was a REALLY disturbing twist! She smiles sweetly to Stanley as if to say, ‘Don’t worry’ Xev suggested that 790 could build more drone arms that could be used to defeat Mantrid. It seems like this would be too little, too late. But what have they got to loose? 790 suggests impudently that his final hours should best be spent fondling his Xev. But the rest of the crew agree that his grubby little fingers would be best suited to building more 790 drones.

As these are constructed, the 790 drones travel throughout the LEXX and destroy all the remaining Mantrid Drones. As the Mantrid Drone cloud retreats the lovely Lyekka tells the LEXX crew that she is able to sense Mantrid’s ship. They collectively decide to take the fight to Mantrid and LEXX sets off for the short journey to Mantrid’s ship followed by the red heads of a few thousand 790 Drones.

As they journey, LEXX mentions that it is disoriented. Kai explains that it is due to gravitational shifts. The universe is shifting towards the LEXX. He suggests that Mantrid must be near and that he has called upon the billions of Mantrid Drones to protect him.

When they reach Mantrid’s ship, they find that it is encased in a proactive matrix of Drones. When Stanley orders the LEXX fire at the drones, we see them part with ease as the destructive force of the LEXX passes by. Stanley looks on frustrated. Then the lovely Lyekka smiles at him and tells him not to worry. She tells Stanley that she will continue to live on in his dreams and she kisses him tenderly on the cheek. Then, she smiles at the rest of the crew and says, “bye bye” before turning into a rather elegant looking Mantrid Drone. Stanley looks on with a tear in his eye! (me too buddy!)

With a sad yet sweet little wave, the Lyekka Drone arm passes into the Mantrid matrix. She is easily able to infiltrate the protective screen of Mantrid Drone arms and heads off to find Mantrid. Lyekka manages to find Mantrid and begins to smash up his ship. She grabs hold of Mantrid’s essence box and exclaims, “I like Stanley, but I don’t like you!” But just as she is about to destroy it once and for all, a few Drones come Mantrid’s rescue and manage to electrocute the lovely, sweet, Lyekka … to …. to…to death! The popular Lyekka is no more. She turns into a pile of dead leaves. However, she was able to disable Mantrid for long enough to enable the LEXX to repeatedly fire at the Matrix. As they break through, they discover thousands of Mantrid Spaceships acting as decoys. They attempt to destroy as many as possible before Mantrid is able to pull himself back together and re-activate his Drones.

Furthermore, 790 tells the crew that within minutes the billions of Mantrid Drones converging from all corners of the Galaxy will soon arrive.

Kai manages to come up with a dastardly plan to defeat Mantrid by, by, erm… running away! He suggests that Mantrid and his billions of Drones will follow and therefore converge at the same point. The Gravitational anomaly caused, will not only mean complete destruction of Mantrid and his drones, but unfortunately, for the LEXX too. Mantrid appears on the screen and gloats. He tells them that running away is useless. He adds that as he promised the game will soon be over when he has killed the last of the Brunnen G. Kai asks what he will do once he has destroyed the Universe and Mantrid explains, “I control the mass of this universe, I can put it where I want! I will create a new portal into the Dark Zone and then I will go into it and eat it for desert. once I have done that I will rest.”

Then we see the rest of Mantrid’s Drones appear, monstrously large cuboids containing billion upon billions of Mantrid Drones. Suddenly Stanley orders the LEXX to stop.

They stand together on the bridge waiting for the end. Stanley says,

“Nice knowing you everybody.”
“Sentiment not returned!” Replies the hateful 790.
“Nice knowing you Stan, and you Kai.” Says Xev.
Kai looks at them both, but says nothing.
“Welcome to the end of the universe.” Says Stanley.
790 moves over and tenderly touches a tearful Xev on the cheek, “You are my only universe Xev.”

Then Mantrid appears. Kai tells Mantrid that he is simply a calculator. Too many Mantrid Drones have been moved too quickly causing the universe to collapse. The destruction of the LEXX will also mean the destruction of Mantrid and all his Drones.

“You have played well.” Says Mantrid with a grimace.
“I concede the game to you!” Later, after such a busy day, they decide to sleep. Stanley retires to his bed chamber and so does Xev… erm… I mean to HER bedchamber. 790 keeps watch and Kai returns to his cryo chamber. As 790 returns to the Bridge, he is attacked by a Drone arms and has his head kicked off! The victorious Drone turns out to me Mantrid who has somehow managed to get onboard the LEXX. Mantrid attacks Xev.

Meanwhile the stupendously lovely Lyekka appears in Stanley’s dream and tells him to wake up and help Xev. He does so and arrives in Xev’s bedchamber after first reviving Kai. Xev manages to defeat the drone arm and stamps on the Mantrid box. Hopefully that is the last we see of Mantrid. The Show and second series ends on the bridge. Kai surmises that since it was the LEXX and it’s crew that created Mantrid, it was therefore they who destroyed the light Zone! Xev says,

“Well, I wonder if the Dark Zone is ready for us.” (A chilling thought!) 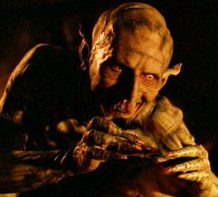 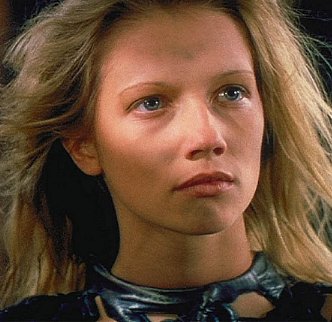 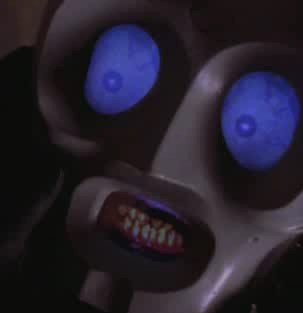