Shishio and Senku are fundamentally at odds with the the strategy for reviving the human race. Shishio only wants to bring back the unsullied, uncorrupted youth and permanently destroy the adults by breaking their statues. Senku on the other hand, wants to bring back everyone

This review follows on from the end of the last weeks Dr. Stone Review. This weeks episode (#3) is called Weapons of Science.

Shishio and Senku are fundamentally at odds with the the strategy for reviving the human race. Shishio only wants to bring back the unsullied, uncorrupted youth and permanently destroy the adults by breaking their statues (I think he may have daddy issues).  Senku on the other hand, wants to bring back everyone.

As you know, Shishio is agile and powerful and Senku is not, but he is resourceful and very intelligent. Their other companion is Taiju who is nothing like either of them, he is the nice-but-dim friend who is happy to do all the chores and help out where he can – he is also completely honest and considerate.

While Shishio and Senku argue on the beach, Taiju runs up to both of them with a jar of the ‘miracle fluid’ he has been able to collect so that they can resuscitate Yuzuriha. Senku is suddenly distraught because with Senku’s outburst, Shishio has now learned of the ‘special fluid’ they use to revive people. This has put Senku at a distinct disadvantage for lots of reasons. When Shishio asks about the fluid, Senku decides it’s best just to show him how it works. 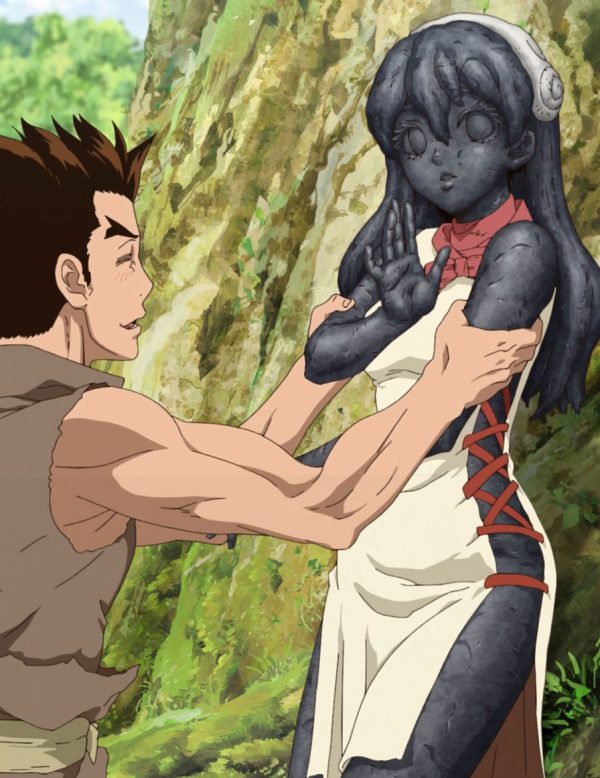 They head out to Yazuriha’s location but Senku reports that there isn’t enough fluid to revive Yuzuriha. Shishio wants to go and get some himself Senku realises that if he finds out where the fluid is collected, Shishio will be able to stop Senku’s operation to revive all humans.

Nevertheless, he tells Shishio the location. Lets face it, Shishio has all the power here, Senku needs to ensure that he doesn’t antagonise Shishio so that he can continue his plan. He simply has to run one plan while giving Shishio the impression that he is running another.

And sure enough, as soon as Shishio heads off to the cave, Senku begins preparations for reviving Yuzuriha. Taiju is oblivious to all this but simply tries to play along. I’m sure he appreciates that Senku is the master of his grand plan and he is happy that Yuzuriha will soon be revived. 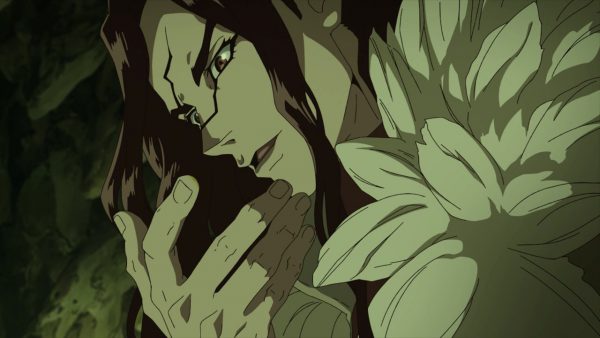 Shishio discovers that the magic fluid is Nitric Acid

Shishio finds the cave and learns that the magic fluid is nitric acid derived from bat droppings. He collects some and heads back. While he does, Senku explains that Shishiro is not interested in the same goals and that although he is a good man, he is also a murderer. 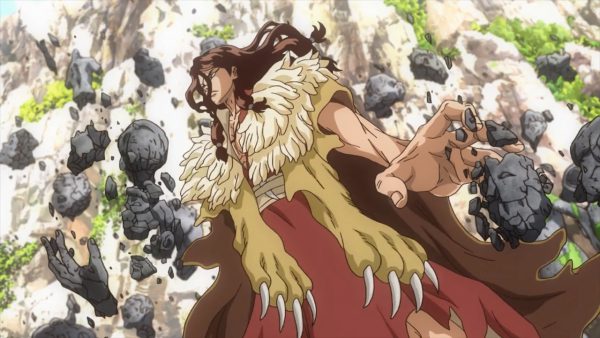 Shishio destroys some statues on the way back

While Yuzuriha is revived Senku explains the scientific process of revival. It all sounds very plausible and I’m sure it’s as accurate as science fiction as you can get, but it went completely over my head, I’m still waiting for them to bring on the dancing bikini vampire girls. 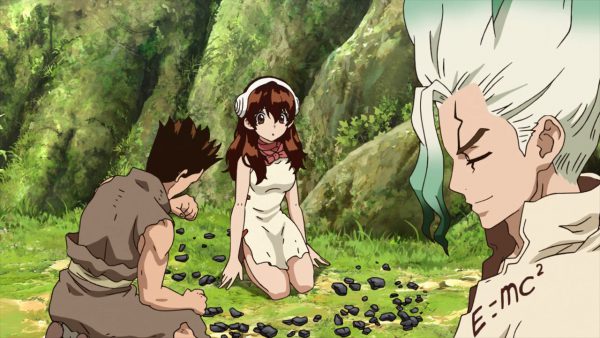 The revival and reunion is interrupted when Senku explains that there are only two options for them. The first is for them to run far away, just the two of them, and the other is to work with Senku to stop Shishio’s murder spree. It’s a bit of a no-brainer for Taiju and Yaziriha agrees – they are staying.

At that point Shishio gets back and a fight between Taiju and Shishio breaks begins. Taiju is kicked and he falls after a delayed reaction. Instead of finishing them off. Shishio decides to leave and tells the others not to get in his way. 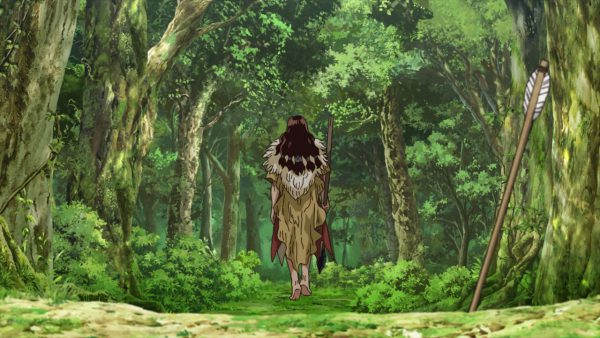 Senku decides that weapons of brute force will not be enough to stop Shishio – the dde is capable to catching arrows fired from a crossbow! Senku tells them that SHishio can only be defeated with science. 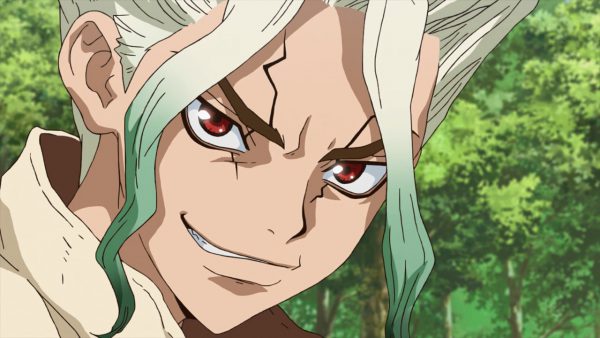 All we need is weapons of science

Senku and Taiju decide to smash up their laboratory and give Shishio the impression that they have left. Indeed, the idea is to leave for a time and then return to carry on their work.

They set off on a trek and during their journey, they discover the Great Buddha of Kamakura landmark a place Yuzuriha remembered from her childhood. They collect some bronze and move on.

Next day, Shishiro returns to the old camp and discovers that they have left. He notices hurried footsteps and disarray as though they left in a hurry. The dude may be a brute but he certainly isn’t stupid and see’s through the Senku’s plan. Shishio decides that Senku has left to go and make weapons of science to fight him. 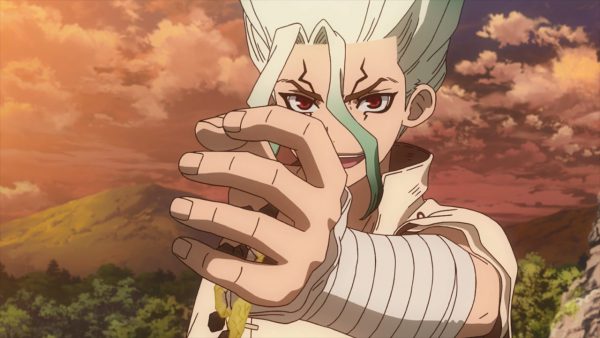 Shishio also concludes that the best weapon of science that Senku can deploy against him, is gunpowder and he vows to stop Senku making some. Not sure that he will do so in time though. I think all he needs next is saltpeter and coal dust. The race is on!

I certainly rated this episode as an easy to watch anime show with substance but personally, and this is definitely personal taste, I really hate the style of animation. The graphics (landscapes etc.) are really nice but the characters are ugly and angular and I personally don’t like looking at them, it’s jarring. So much so, that I probably won’t be following the rest of this saga and this will be the last review. It’s still a good story, but just not for me.

You can credit this show yourself, just select the user tab in the review block above end enter your ratings.
You don’t need to register to vote.

The characters, pictures, story and everything else associated with the show is copyright  TMS Entertainment Co., Ltd., and Crunchyroll.  All rights reserved.