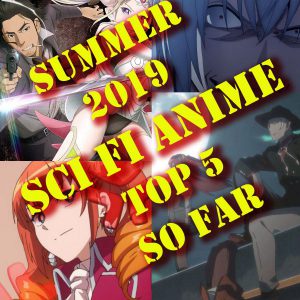 Typically, anime fans watch three episodes to make up their minds on whether or not to continue watching the show or not.  In this article we take a look at the most highly rated shows and determine if it is worth continuing with them. You can, of course, read detailed reviews of most of the shows in the anime category of this site – Here. Please be warned, there are spoilers for the first three episodes of most of the shows mentioned below.

I also looked around at other reviewed and found out what they thought, these views aren’t just mine, I’ve checked out the thoughts and views of the guys at Thrilllist, Honeys anime, comments at Horriblesubs, comments at Animenewsnetwork and reviews at (although, I’d have to say, I’m the only one who has done detailed reviews of each of these shows as they’ve aired).  Everyone has different tastes, but I hope you find something cool to watch here.

The premise is that two schoolchums meet up after an apocalyptic petrification of the human race! Humanity is turned into stone statues!   Senku is revived 3,700 years later and we don’t yet know how or why. Senku manages to find a way to revive his friend (Taiju) and anyone else who is still in one piece as a statue. The story develops not about how to survive in a world without the everyday necessities in life (as you might expect from a lesser series), it’s more about how they will resurrect humanity in it’s entirety! Much more exciting!

The only problem is that when they managed to revive someone else (Shishio) who was considerably more athletic and aggressive (so much so that he is powerful enough to be able to kill lions with his bare hands), we learn that he and Senku are fundamentally at odds with the their strategy for restoration of humanity. Shishio only wants to bring back the unsullied, uncorrupted youth and permanently destroy the adults by breaking their statues (I think he may have daddy issues). Senku on the other hand, wants to bring back everyone.  He believes Shishio to be a murderer. 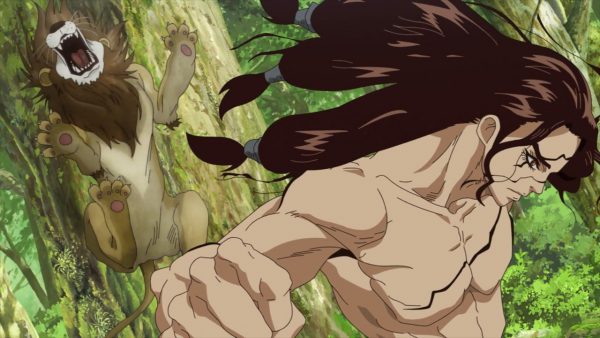 I certainly rated this series very highly for characterisation and story. The graphics, for most people, are wonderful. The story is well written and the characters are developing nicely. Unfortunately for me, I really hate the style of animation. The graphics (landscapes etc.) are nice but the characters are ugly and angular and I personally don’t like looking at them – it’s jarring. I probably won’t be following the rest of this saga. Don’t get me wrong, it’s awesome, and is suitable for the older kids among us (i.e. although this is a popular shounen manga, it’s not too silly).

Detailed episode reviews are here: Episode 1: Stone World,  Episode 2: King of the Stone World, Episode 3: Weapons of Science. (feel free to rate the shows yourself.  As with all my reviews, you don’t need to register to mark them yourself, just click the User tab in the reviews section).

This is a remake of a respected Japanese anime series called Yokai Ningen Bem, an original classic supernatural anime adventure and only mildly sci fi anime. It dates back to 1968!  Production is very good and character design are by the same people who have recently undertaken the character design for Cop Craft. I’ve watched two episodes so far and loved every minute of both! Detailed reviews of BEM are here: Episode 1: Water and Episode 2: Liar 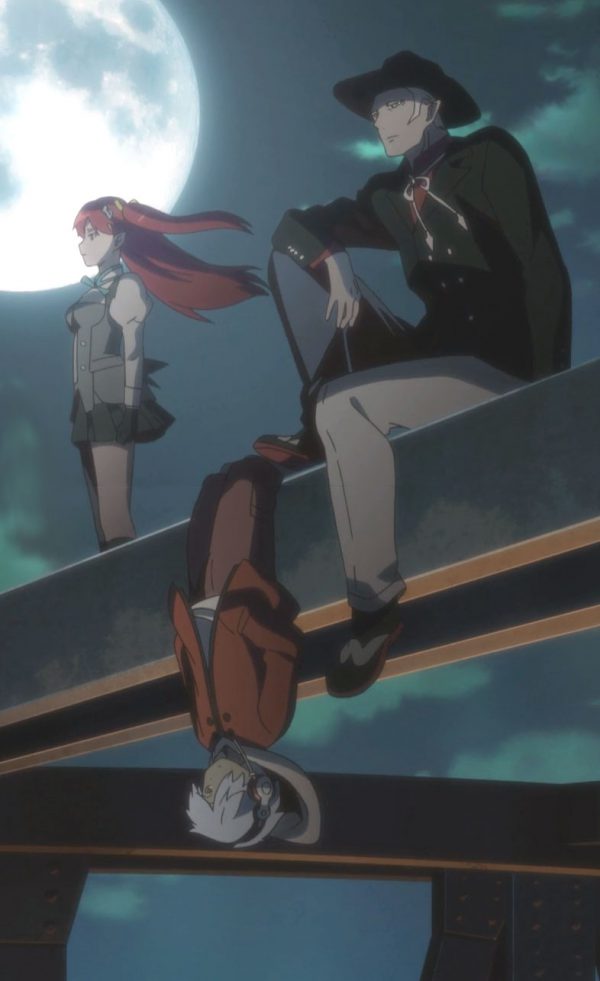 The direction of the show was great and the development of the lead characters (so far that’s Bem and Bela) is wonderful. I have such a crush on Bela, who I am positive is the older sister of Cat Girl from Gegege no Kitaro! The stories are really good with some interesting twists and turns. I would criticise the episode, if would be for the cheapo character drawing. Yeah, really weird – the design in the show is amazing but the villains look as though they have been drawn by some animators apprentice! Or worse still, in the style of a villain from the first series in the 1960’s. Really tacky animation spoiled the show. Also, this is for all the family and not just for grown up kids like us. That might make you feel it’s a little tame.

The show is produced by Millepensee and its shown on Tokyo MX, BS11, KBS Kyoto, AT-X, WOWOW, and Crunchyroll all right reserved.

This refers to the top-ranked esper (extra sensory perception user) residing in Academy City where the story is set, he is lazy maniacal cool dude with superpowers.  You can read detailed reviews for the first three episodes here: Episode 1: Accelerator, Episode 2: Necromancer. 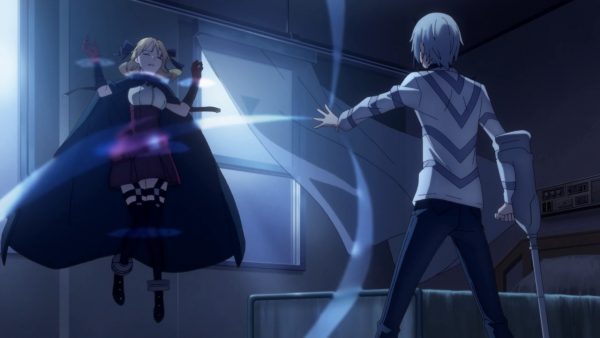 The production and direction so far have been really good and the stories are interesting. Graphics are great and I particularly liked the use of colour during each episode which adds an extra dimension to the already thrilling storyline. The maniacal laugh of the lead character certainly takes some getting used to but if it’s used sparingly, it ends up being ok (a bit like Astra’s shouting in Black Clover). If I was to criticize this at all, it’s that there wasn’t quite enough gratuitousness. Sure, each show is hard and gritty but if it’s gonna be ‘bloody’ why not make it that little bit more gory too – the producers didn’t take full advantage of the the ‘eeww’ factor and it could have been better done. Just a personal niggle though, I actually loved the show and highly recommend it.

The show is produced by J.C.Staff and shown on AT-X, Tokyo MX, MBS, and BS11 and of course Crunchyroll.

Or, “Do You Love Your Mom and Her Two-Hit Multi-Target Attacks?” No kidding, it sounds even better in Japanese, “Tsujo Kogeki ga Zentai Kogeki de Ni-kai Kogeki no Okasan wa Suki desu ka?” and some very astute person decided that this was too much of a title for your average anime fan, so they re-named it, “Okaa-san Online”.  I’ve  uploaded two detailed episode reviews Episode 1 is entitled:  The Boy Thought He Was Embarking on a Great Adventure… But, Uh, What’s Going on Here? and Episode 2 is called: It’s Just a Coincidence They’re All Girls. Got That? Wipe that Smirk Off Your Face.

The series is based on the “momcom” fantasy light novels written by Dachima Inaka and illustrated by Iida Pochi. Masato Oosuki, has been willingly drawn (read transported) into an RPG world with his doting mother as part of a secret government programme. Masato is an experienced RPG gamer and keen to show off his gamer skill – his mother however, is a over-powered, dual-wielding, multi-target specialist! 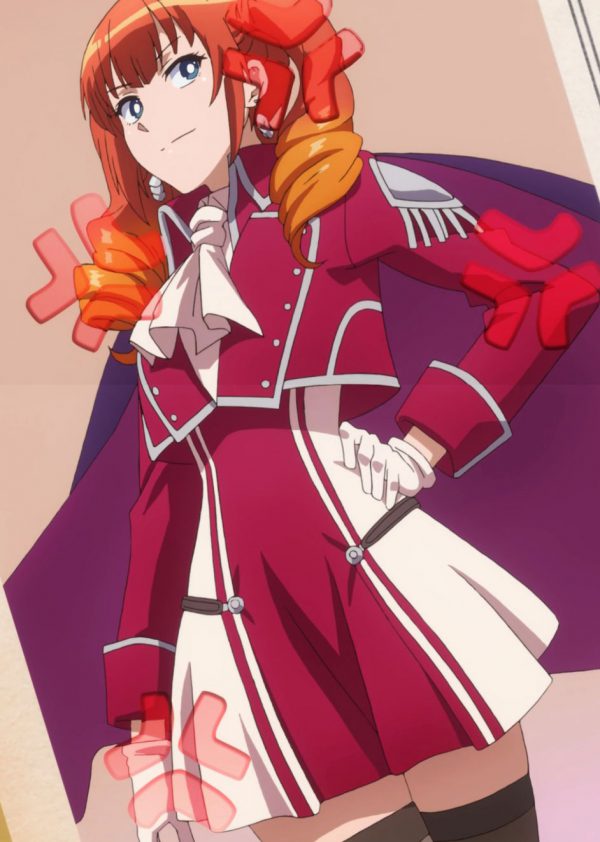 I watched the start of the first episode and yep, I actually did say, “Oh good grief, not another Isekai?!” but quickly bit my tongue as I laughed. This was a fun show and if you can get over empathising with the poor dude about the embarrassment of being trapped in a game with an OP mother, you’ll find this anime great fun! Its a bit ‘fan-service’ too which makes it even funnier.  If you like Isekai anime, you will really enjoy this.

Available on Funimation and Crunchyroll, Fridays at 1 PM EST.

Best anime on TV at the moment by a long way!  The opening explanation of each show sums up the premise quite nicely.  “Fifteen years ago a hyperspace gate appeared in the middle of the Pacific. Beyond the gate lay a strange world filled with fairies and monsters. [The setting]  Kariaena Island, the city of San-Teresa – the city is Earths ‘front door.’  Over two million citizens from this other world live here. A mixture of different races and diverse cultures. Haves and have-nots, the worlds newest city of dreams. But in the shadows of all this chaos lurked countless crimes. Drugs, prostitution, weapons, smuggling. The San-Teresa Metropolitan Police maintained a special unit to deal with these crimes.

What I particularly like about this saga is the characters.  Two completely different people different worlds, different cultures, two ways of enforcing justice and the whole opposite sex thing too.  Both characters are flawed and still interesting.  The baddies are cool too – any story which has fairies being captured and turned into drugs has got to be a winner in my book! 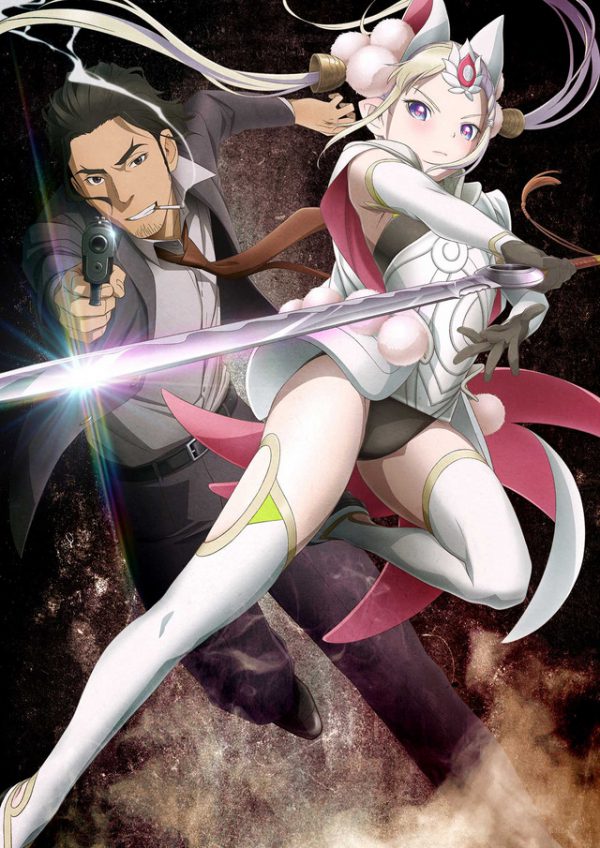 The show is still developing is a serial so we are enticed to keep watching with a cliff-hanger each week. This feels a little old fashioned but they pull it off pretty well.  The characters are gritty, there are innovative scenes and settings, the direction is tight and there seem to be high production values except for some still frame graphic sequences during some fights which always seem a little cheap and hurried to me.  If I was going to recommend the top anime show this season, it would be this one.

Cop Craft is available on Funimation on Mondays.

Of course, to say that these will be your top 5 is silly, but I hope you at least check them out.  Other shows that should get an honourable mention are:  Fire Force (reviewed here and here), Kanata no Astra (which I reviewed here and here), The Ones Within (reviewed here) and the very cool Isekai Cheat Magician (reviewed here) .  The show I’m really waiting for however, is the amazing Kings Avatar which is rumoured to be out this week but still haven’t seen any confirmations anywhere – amazingly the Live Action series is due out soon too AND and animated film! Summer Anime has never been so much fun!

I really hope you find something you enjoy, I’m having a blast!

Discuss this in the Anime Forum

This list/review is copyright Tony Fawl, not for reproduction without the authors permission.

Pictures, stories and everything else associated with the shows reviewed, are copyright their respective production companies and distributors. All rights reserved.